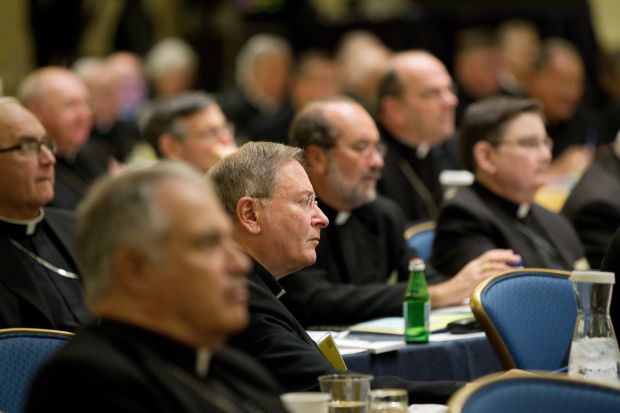 U.S. bishops gather for their annual meeting in November last year. They will meet again for their fall meeting Nov. 12-15 in Baltimore. (CNS photo/Nancy Phelan Wiechec)

WASHINGTON (CNS) — Elections for a new president and vice president, a discussion and vote on a Spanish-language book of prayers at Mass, and a proposal to develop a statement on pornography are among the items awaiting the U.S. bishops when they gather in Baltimore for their annual fall assembly.

At their Nov. 11-14 meeting at the Baltimore Waterfront Marriott Hotel, the bishops also will hear a status report on their strategic/pastoral plan and vote on the final translations from the International Committee on English in the Liturgy on liturgical practices regarding marriage and confirmation.

As is customary, Cardinal Timothy M. Dolan of New York, president of the U.S. Conference of Catholic Bishops, and Archbishop Carlo Maria Vigano, apostolic nuncio to the United States, will address the assembly.

The bishops will elect the next president and vice president to lead the USCCB for the next three years from a slate of 10 candidates. Their term begins at the close of the meeting.

The bishops will vote on accepting the “Misal Romano” from Mexico as the base text for the Spanish-language missal used in U.S. parishes. The bishops’ conference of Mexico received approval from the Vatican, or “recognitio,” to use the text earlier this year. The U.S. version of the missal would be available by the end of 2014 or early 2015 under current USCCB plans.

Several adaptations in the missal also will be voted on by the bishops.

Other liturgical changes on which the bishops were expected to vote govern the celebration of marriage and confirmation.

If adopted by the bishops, the order of celebrating marriage will be sent to the Vatican for “recognitio.” A second vote on four adaptations to the order also is planned.

The order of confirmation that will be considered is a retranslation from ICEL and would bring the order into accordance with the norms of “Liturgiam Authenticam” (“The Authentic Liturgy”), the 2001 document on liturgical translations from the Vatican’s Congregation for Divine Worship and the Sacraments.

The bishops also will vote for chairmen-elect of the committees on Canonical Affairs and Church Governance, Child and Youth Protection, Ecumenical and Interreligious Affairs, Evangelization and Catechesis, and International Justice and Peace. They serve as chairmen-elect for one year then begin a three-year term as chairmen of their respective committees in November 2014.

A new chairman will be elected to head the Committee on Catholic Education and will begin his term at the conclusion of the meeting. He will succeed Bishop Joseph P. McFadden of Harrisburg, Pa., who died May 2.

A vote on new members of the boards of the Catholic Legal Immigration Network Inc. and Catholic Relief Services also is on the agenda.

PREVIOUS: Woman who left upscale life to minister to prisoners as nun dies at 86

NEXT: NFL execs, alumnus give $10 million to Catholic school in Arkansas