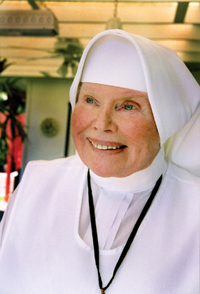 TIJUANA, Mexico (CNS) — Mother Antonia Brenner, a mother of seven and one-time Beverly Hills neighbor of movie stars, died Oct. 17 at the headquarters of the religious order she founded after she gave up her comfortable lifestyle to live among and minister to prisoners. She was 86.

The former Mary Clarke became known as the Prison Angel to the prisoners at La Mesa Penitentiary in Tijuana when she left Beverly Hills, began wearing a habit and veil, and moved into a standard prison cell to attend to inmates’ spiritual needs.

The twice-divorced Clarke began her prison ministry in 1965 when she accompanied a priest as he delivered medicine and other supplies to the Mexican prison’s infirmary. In 1977, with her children grown, she moved into the prison, sleeping in a cell in the women’s wing.

Now known as Mother Brenner, she eventually established a religious order, the Eudist Servants of the 11th Hour, for older women. The order has expanded to include work with prisoners in the United States and a house of discernment in Texas.

In late 2007, speaking at a retreat center in Techny, Ill., Mother Antonia and her ministry colleague, Divine Word Father Melvin James, told stories of being with dying inmates, of helping a drug dealer turn his life around, of breaking into Broadway show tunes and bringing smiles to all around her.

“In 30 years there, I haven’t met anyone that wasn’t worth everything I could give to them — even my life,” Mother Antonia said. “I see the image and likeness of God in each and every one of them.”

The biography of Mother Antonia on the website of the Eudist Servants says she was raised in Beverly Hills, the child of a successful Irish immigrant businessman. In her early years, it said, she participated in a variety of assistance programs to aid suffering people around the world, or in the United Farm Workers movement.

Her first marriage, at an early age, ended in divorce after two children were born. She remarried, had five more children and ran her father’s business after he died.

After 25 years of that second marriage, she divorced, sold her home and possessions and moved full time to La Mesa, ministering with the permission and support of the bishops of Tijuana and San Diego.

When she was 50 years old, then-Bishop Juan Jesus Posadas of Tijuana made her an auxiliary of the Mercedarian religious order, which ministers to prisoners, the biography said.

In 1997, after receiving inquiries from people interested in joining her ministry, she received permission from the bishops to begin the process of forming the Eudist Servants. The community was formally accepted by the bishop of Tijuana in 2003.

Obituaries about her in California and Mexican newspapers quoted people who said their lives were changed by Mother Antonia.

“If it weren’t for Mother Antonia, I would have been dead in prison or discarded in the street because of drugs,” said Antonio Granillo, now director of a shelter for people with HIV/AIDS, in one Mexican newspaper.

Mother Antonia’s life has been the subject of numerous articles and a book, “The Prison Angel,” by Mary Jordan and Kevin Sullivan, as well as a documentary, “La Mama: An American Nun’s Life in a Mexican Prison,” which was narrated by actress Susan Sarandon.

A memorial Mass was scheduled for Oct. 24 at St. James Church in Solana Beach, Calif. No other funeral details were released.

NEXT: Elections, marriage and confirmation texts among bishops’ agenda items