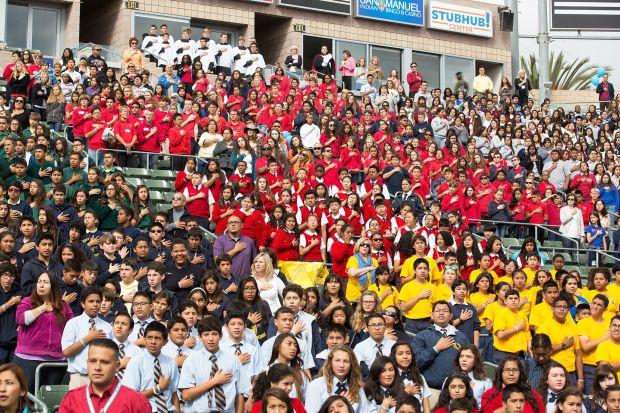 He told the screaming girls and clapping boys that being a successful 20-something actor in “telenovelas” on TV wasn’t all that great. In fact, during this fast-paced hedonistic part of his life, he said, “I was lost, I was unhappy.”

After taking voice lessons to improve his English pronunciation from a Catholic coach, he resolved to change his destructive lifestyle.

He went to Mass daily, read the Bible, said the rosary, went to confession and, most of all, simply prayed. And he turned down juicy — but demeaning — roles in the Mexican soap operas for a year.

Verastegui, now 39, joined with director Alejandro Gomez Monteverde and another partner to form Metanoia Films, now based in Beverly Hills. “Metanoia,” a Greek word, means a change in one’s way of life resulting from repentance or spiritual conversion.

They were determined to make movies with a positive image of Latinos, instead of them always being portrayed as bandits, drug dealers, traffickers and womanizers. Their first effort was the big hit “Bella,” the award-winning film story of how an unborn child helps two people fall in love.

In researching his starring role for the movie, Verastegui had an experience “that changed my life forever,” he said.

He went to an abortion clinic with pencil and paper in hand. There he met a young woman who was going to have an abortion. He listened to her story, showed her a video and told her she was not “alone” if she decided to have her baby. She broke down in tears, changing her mind. Months later she had her baby and the proud parents asked the actor if they could name the child “Eduardo.”

“After that I said, ‘God, please use me as an instrument. I want to end this horrible crime in the world, and I’m going to do it through the media. Please help me and guide me,'” he recalled.

After “Bella” was released to critical and popular acclaim, the film’s star and its director opened a pro-life crisis pregnancy clinic, Manto de Guadalupe, for poor Latina women near Lafayette Park in Los Angeles.

“Life is not an accident. Life is sacred, a gift from God,” Verastegui said. “And we have to defend it from conception to natural death — all of us — practicing the Golden Rule: Treat others the same way you like to be treated.”

Christian Service 4LIFE, presented by Lifesocal and the Los Angeles Archdiocese’s Office of Life, Justice and Peace. It was one of many events planned around the country for Respect Life Month, observed each October by the U.S. Catholic Church.

In Carson, the half-day happening on the campus of California State University was designed to inspire junior high and high school students to “do something positive for life.”

They played life-awareness games. And they watched videos not only about abortion, but other much less publicized life issues such as respecting the elderly, eliminating poverty, caring for the sick, and helping the disabled and disadvantaged.

“Our hope is that these students leave the event motivated to take action at their schools and in their communities to stand up for life from conception to natural death,” said Carol Golbranson, director of Lifesocal, which promotes pro-life efforts in Southern California. “This amazing event is another successful step on the road to changing the culture.”

But the pep rally changed to a sacred liturgy when Los Angeles Archbishop Jose H. Gomez processed into the stadium cradling a gold monstrance with the Blessed Sacrament, while a girls’ choir sang the traditional Latin hymn “O Salutaris Hostia.”

At the beginning of benediction, he censed the makeshift altar and knelt before it in silent prayer. He then led the students in praying the “Our Father,” “Hail Mary” and “Glory Be.”

“So today as we are here in the presence of Jesus in the Blessed Sacrament, let us offer our prayers that we can listen to God and say ‘yes’ to him, and become the new missionaries of the 21st century,” the archbishop said during his brief remarks. “We need to defend the innocent — from conception to life and to natural death.

“We need to reach out to everyone with the helping hand of Jesus Christ — from the woman who is having a child, to the handicapped and aged. We need to be the source of mercy and understanding, welcoming to everyone. What this means is that God is calling each one of you, each one of us, to be saints.”

Father Miscamble said that U.S. culture fosters a “blanket denial” over what is really happening to the weakest and most defenseless in the nation today. But the Holy Cross priest said he knew his youthful audience understands the truth.

“You know well that there has been a cheapening in the value of human life in our time,” he told them. “From the millions of abortions that occur, to legalized assisted suicide, to the mistreatment of those on the margins.”

But Father Miscamble stressed it’s one thing to gain knowledge about a problem and a whole bigger challenge to act on that knowledge. He explained this was not doing something “bad,” but a failure to do something “good.”

“We know where the challenges are and we know we can’t do everything,” he said. “But each of us, each person here, knows that you can do something. And we must. The basic question is in the end not simply what you can do, but rather whether you are worthy to be good and courageous people who refuse to be indifferent bystanders.”

Nathaniel Rivera, a seventh-grader at St. Marianne School in Pico Rivera, said he could see himself being part of the next generation of pro-life missionaries Archbishop Gomez called for.

Another seventh-grader from St. Marianne was charged up, too.

“I really want to help the poor and the elderly, but I never had the courage to,” admitted Marco Chavez. “I think this will give me the courage to do those things.”

Dellinger is a staff writer at The Tidings, newspaper of the Los Angeles Archdiocese.

PREVIOUS: Pilgrimage, global rosary connects Catholics with Mary, one another

NEXT: Daughters of Charity to withdraw from Nashville, eight other dioceses