Pilgrimage, global rosary connects Catholics with Mary, one another 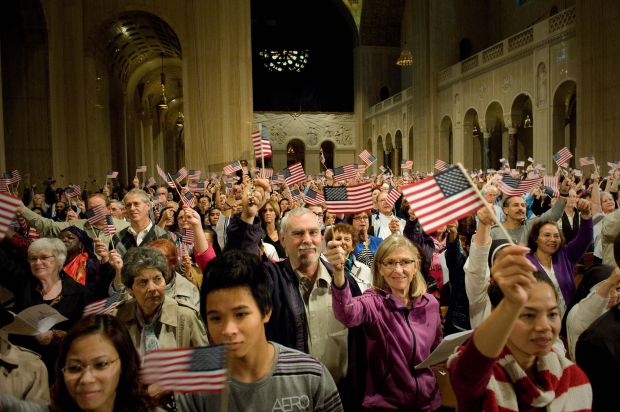 People wave U.S flags Oct. 12 at the Basilica of the National Shrine of the Immaculate Conception in Washington. (CNS photo/Matthew Barrick)

WASHINGTON (CNS) — Carmen Dupuy, a native of Venezuela, waved the American flag with excitement along with more than a thousand other pilgrims to honor Mary and the universal church.

Dupuy, who now lives in Alexandria, Va., is a member of Queen of Apostles Catholic Church. She described the atmosphere inside the Basilica of the National Shrine of the Immaculate Conception as one that allowed her the best opportunity to have the connection she has felt in her heart through Mary.

“(You have) the connection through Mary, our mother, directly to Christ,” she said. “There, he tells us, ‘Go be apostles to all nations.'”

Dupuy and many other worshippers came to Washington’s national shrine for the Diocese of Arlington Pilgrimage on Oct. 12. The northern Virginia diocese’s pilgrimage, which takes place every two years, had as its theme this year “Mary, Star of the New Evangelization, Increase our Faith.”

The pilgrimage also was part of an overnight vigil in Rome to honor Mary on Oct. 12-13.

The day’s events included a Holy Hour, Mass with Arlington Bishop Paul S. Loverde and the papal rosary, which was simulcast live from the Shrine of the Divine Love in Rome, involved nine other global Marian shrines.

Before the rosary, Pope Francis encouraged all to pray for the peace of the world. He said Mary looks upon believers the way a mother does.

“When we are tired, discouraged, overwhelmed … we look at Mary,” he said. “She looks upon us the way a mother does — with love.”

In his homily during the morning Mass Oct. 13, Pope Francis celebrated Mary as a model of docility, fidelity and gratitude to God.

In Washington, Tom Howard, a pilgrim from St. Michael’s Church in Annandale, Va., said he appreciated the opportunity to worship with other pilgrims during the rosary.

“It’s a special blessing to pray toward our Blessed Mother and to recall the dignity of women,” he told Catholic News Service.

Pilgrims Theresa Du and her mother, Anh Nho, came from Woodbridge, Va. Du and Nho, who are Vietnamese-American Catholics, described participation in the rosary as a way toward evangelization.

“For her (my mother), it’s the responsibility of everyone in the Catholic Church to bring the good news to everyone,” Du said, translating for her mother.

Andy Flood of St. John the Apostle Catholic Church in Leesburg, Va., said he visited the Basilica for the first time on Oct. 12. Flood, who is part of St. John’s Rite of Christian Initiation for Adults group, said the pilgrimage was part of his initiation into the Catholic Church.

“Today is about strengthening my faith in the Church and my belief in God,” he said.

Flood’s wife, Michelle, said she was happy to see love and unity among worshippers.

“It’s refreshing to see so much unity in the Christian faith, and the love of Christ among the young and the old,” she said.

NEXT: Goal of rally is to inspire youths to ‘do something positive for life’