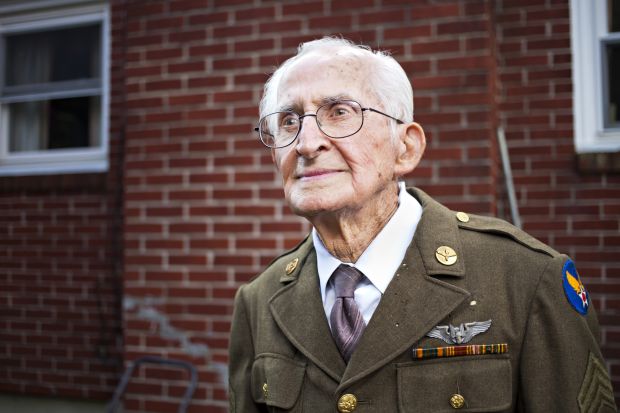 Leo Wojciechowski, who as a U.S. Army Air Corps corporal was shot down during a 1944 bombing mission on the Czech-Polish border, is pictured outside his Baltimore home in late August. (CNS photo/Tom McCarthy Jr., Catholic Review)

Anti-aircraft fire had struck the nose gunner’s plane during the Aug. 7, 1944, mission, causing it to lose speed and altitude as gasoline flooded the rear of the compromised aircraft.

Wojciechowski and the nine other crew members had only one option: jump. It was a fateful step that would ultimately lead to more than a year of harrowing experiences inside prisoner of war camps for Wojciechowski — and, ultimately, a deepening of his Catholic faith.

In an interview with The Catholic Review, Baltimore’s archdiocesan newspaper at his home in Dundalk, he reflected on his memories of war and redemption.

When he launched himself out of his plane so many decades ago, Wojciechowski hit his head — briefly getting knocked out. The then-parishioner of Holy Rosary in Fells Point awakened to discover himself floating beneath a parachute toward a large clover patch in Czechoslovakia, 400 miles inside enemy lines.

“I was terrified,” said Wojciechowski, now a white-haired parishioner of Sacred Heart of Mary in Graceland Park. “I had a 45 (.45-caliber revolver) with me, and I thought that if anyone saw me with a gun, they’re going to shoot me. You are at their mercy.”

The airman tossed his weapon in a ditch before an angry farmer approached him with a pitchfork and spoke in German.

“He looked at my dog tags and saw that I was Catholic,” Wojciechowski told the Review a few weeks before he was honored with other POWs at the Pentagon in September. “He took my holster off and smacked me across the face with it. He said he couldn’t understand Catholics bombing Catholics.”

Wojciechowski’s bombardier landed nearby and was soon standing alongside the nose gunner when two Gestapo agents appeared to interrogate them. Although Wojciechowski spoke Polish, he pretended not to understand when questioned in the language.

One of the agents tied the Americans’ hands behind their backs and laid them side-by-side in a field.

“He got in the Volkswagen and started driving real fast like they were going to ride over us,” Wojciechowski remembered. “I started screaming and hollering and kicking my feet, and they stopped within a foot of us.”

After being jailed and sent to a Frankfurt interrogation center, Wojciechowski was transported to a prisoner of war camp in Luxembourg called Stalag Luft VI.

“They were so unorganized that it was pretty rough trying to get food,” he remembered. “It was a horrible experience for about three weeks.”

Wojciechowski was transferred to Stalag Luft IV in northern Poland, where he was placed on kitchen duty peeling potatoes. It was there he met a Scottish priest who had been captured after his plane was shot down while he was accompanying British airmen on a mission. The priest celebrated Mass every week for the prisoners of war and offered them support.

Wojciechowski promised God he would never miss Sunday Mass if the Lord would deliver him from the enemy. He prayed the rosary and wrote to his Baltimore girlfriend, Thelma (who would later become his wife of 66 years and counting), asking her to pray for him.

“I was happy that Boze spared me,” said Wojciechowski, using the Polish word for God. “I guess I must have been blessed because Boze was looking out for me.”

Wojciechowski spent time in Stalag Luft I in Germany, ultimately being liberated in the spring of 1945.

While his memories of his war-time experiences are clear, he recalls nothing of what may be his most significant act.

According to Morton Gollin, navigator on Wojciechowski’s downed B24, Wojciechowski pulled him back into the plane after Gollin’s parachute got snagged on a lip of the nose-wheel door when he tried to jump.

“There’s no question in my mind that he saved my life,” said Gollin, 91, in a telephone interview from his home in California.

That fateful mission, which took off from an air base in Italy, was the first Gollin had served with Wojciechowski’s crew. As an officer, protocol demanded that he should have let Wojciechowski jump first.

“Happily, I wasn’t very cognizant of protocol,” Gollin said with a laugh. “Had I allowed Leo to go first, I would have gone down with the plane.”

Gollin said he is eternally grateful to Wojciechowski and has written him notes of appreciation.

Wojciechowski acknowledged it’s possible he forgot about the incident when he was knocked unconscious. Or, he said, there may be a divine explanation.

“Maybe Boze is telling me to forget about it,” he said, noting that the kind act was not meant to be remembered.

Gently cradling a Purple Heart and other medals he earned in the war, Wojciechowski, who left the Army with the rank of sergeant, balked at the suggestion that he is a hero.

“We tried to do as much as we could to stop the Nazis,” he said in a soft voice. “We felt duty-bound to do the best we could for our country.”

PREVIOUS: First U.S. edition of missal in Spanish may be on the horizon