At least 13 dead as boat carrying pilgrims capsizes in Amazon 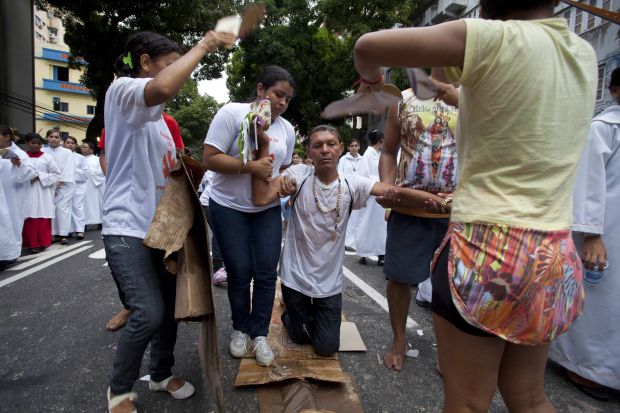 A pilgrim arrives on his knees at Our Lady of Nazareth Basilica during the annual Cirio de Nazare procession in Belem, Brazil, Oct. 13. (CNS photo/Paulo Santos, Reuters)

SAO PAULO (CNS) — At least 13 people died and five were reported missing after a boat carrying devotees of Our Lady of Nazareth capsized in the Amazon River.

The accident occurred Oct. 12 near the port of Macapa, capital of Amapa state, where more than 130,000 Catholics gathered to celebrate a procession for Our Lady of Nazareth. Authorities said the boat, one of several taking part in a 12-mile journey to Macapa, had a capacity of 40 people but was holding 70 when it turned on its side.

The procession of Our Lady of Nazareth occurs in several cities throughout northern Brazil every year on the second Sunday in October. It is the largest single Catholic celebration in Brazil and one of the largest in the world.

The basilica was built on the spot where, in 1700, an indigenous Brazilian peasant found a small image of Mary and her child, now known as Our Lady of Nazareth.