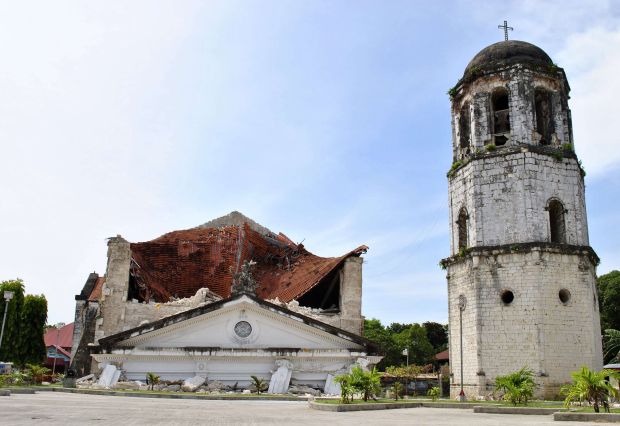 The collapsed facade of Holy Trinity Church is seen in ruins after an earthquake struck Bohol, Philippines, Oct. 15. (CNS photo/Reuters)

The bishop, who said the Oct. 15 quake “was so strong,” told the Asian church news portal ucanews.com that Spanish-era churches in the towns of Loon and Carmen collapsed. At least two people were reported trapped inside the Loon church, the bishop added.

Reports said the Church of Our Lady of the Immaculate Conception in Baclayon, considered one of the oldest churches in the Philippines, was also heavily damaged.

As the death toll neared 100 and aftershocks continued, Rey Balido, spokesman of the National Disaster Risk Reduction and Management Council, said, “We are expecting the number of casualties to rise as we continue to receive reports from the field.”

Contributing to this story was Simone Orendain in Manila, Philippines.