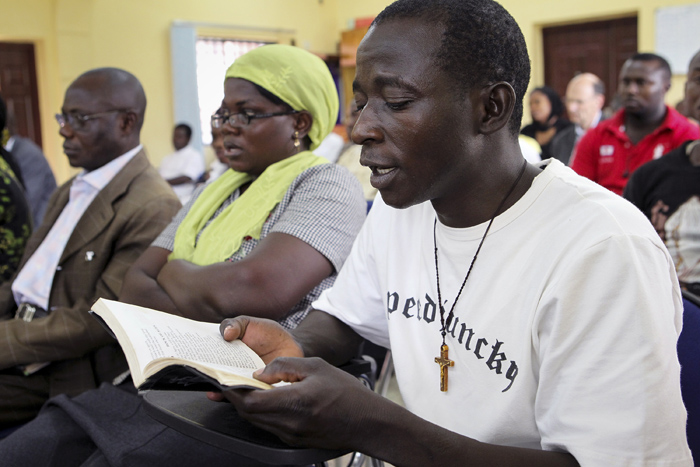 A man attends weekday Mass at the archdiocesan headquarters in Abuja, Nigeria, in this 2010 file photo. Over the last few years "Nigeria has been the most dangerous place in the world for Christians," said a new report on persecution from Aid to the Church in Need. (CNS file photo/Nancy Phelan Wiechec)

MANCHESTER, England (CNS) — The persecution of Christians around the world has intensified over the last two-and-a-half years, according to a review of religious freedom in 30 countries.

Not only are Christians in the Middle East and Africa suffering increasingly from Islamist terror attacks, but they continue to endure severe persecution and hardship in Communist, Marxist or post-Communist states, said a 192-page report by the United Kingdom branch of the Catholic charity Aid to the Church in Need.

Christians also are persecuted by religious nationalists in some countries where they find themselves in a minority, said the report, which was published Oct. 17.

(Read the full report here. Please be patient when downloading this large file.)

John Newton, a co-author of the report, told Catholic News Service Oct. 18 that the plight of Christians had deteriorated since early 2011, when the last biennial report on the global problem was published by the charity.

For Christians, the so-called “Arab spring” has in many cases become what the report calls a “Christian winter,” a release on the report said.

“Out of the 30 countries that we have assessed, in 20 of them, the situation has worsened in some way, but in some of these where there has been no change the problems were already extreme any way,” Newton explained.

“It doesn’t mean, by any means, that the other 10 are places where it’s easy to be a Christian,” he added.

Persecution of Christians was a phenomenon “happening in many different contexts,” Newton said.

Among the main culprits were the adherents of violent interpretations of Islam and of the 30 countries examined by the charity, six were Middle Eastern or Arabic countries with Muslim majority populations.

Newton said that in recent years, the problem of attacks by “well-resourced” Islamist groups has reached into several continents, spreading to such African nations as Nigeria, Mali and Tanzania.

Christians in India, Sri Lanka and Myanmar also faced persecution from majority Hindu or Buddhist nationalists who have conflicting ideals of “what a citizen of the nation should be like,” Newton said.

Some of the worst instances of persecution, however, continued to be found in Communist or former Communist states, he continued.

Foremost of these was North Korea, where imprisoned Christians routinely faced torture and beatings. “The treatment meted out to Christians is far worse than that for ordinary political prisoners,” Newton said.

He said that in Eritrea, a country on the Horn of Africa, Christians also were persecuted by a Marxism-inspired government, which had detained more than 2,000 people, arresting nearly 200 for practicing their faith in the first five months of 2013.

Newton said that some Christians had been tortured by hanging from trees, made to walk barefoot over sharp rocks or locked in metal containers in the desert.

Less severe instances of harassment of Christians were observed in China and in such post-Communist countries as Vietnam, Laos, Cuba, Belarus, Uzbekistan and Turkmenistan.

All the countries examined in the report had previous records of persecution or harassment of Christians.

The report — titled “Persecuted and Forgotten?” — was released at a meeting in the Houses of Parliament in London Oct. 17. Anglican Archbishop Rowan Williams, former archbishop of Canterbury, and Patriarch Gregorios III, the Lebanon-based leader of the Melkite Greek Catholic, were in attendance.

In an accompanying press release, John Pontifex, the report’s other co-author, said persecution in parts of the Middle East has become so grave that the survival of Christians in the region was “now at stake.”

For Christians, the so-called “Arab spring” has in many cases become what the report calls a “Christian winter,” the release said.

NEXT: Pope Francis prefigured: Discovering the real John Paul I