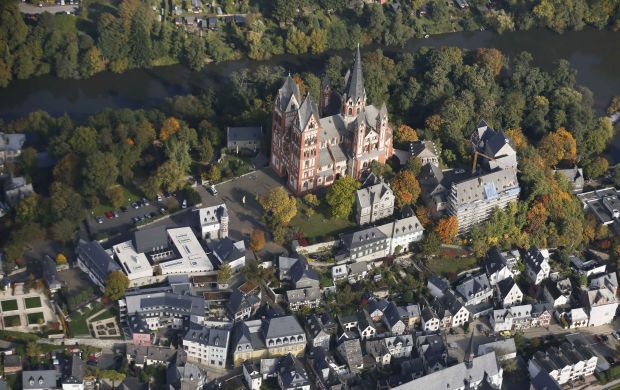 VATICAN CITY (CNS) — The president of the German bishops’ conference said he was “strengthened and encouraged” by his discussion with Pope Francis about the case of a German bishop under fire for a massive building project that critics have denounced as extravagant.

Archbishop Robert Zollitsch, the bishops’ conference president and recently retired archbishop of Freiburg, told reporters Oct. 17 that he would not share details of his meeting with Pope Francis that day because it was confidential.

The archbishop said a commission he formed to investigate the project in the Diocese of Limburg would begin its audit Oct. 18.

“After my meeting today with Pope Francis, I can assure you that all sides are interested in a good and speedy solution in order to bring tranquility back to the Diocese of Limburg and to find a way out of this difficult situation,” the archbishop said.

The head of the Limburg diocese, Bishop Franz-Peter Tebartz-van Elst, had been in Rome since Oct. 13, but as of Oct. 17, his name had yet to appear on any list of people received by the pope.

Bishop Tebartz-van Elst has been a target of protests for allegedly spending close to $40 million in renovations and new construction on his residence and diocesan offices, and for allegedly making false statements in court.

Archbishop Zollitsch had told reporters Oct. 14 that he expected the bishop to do some serious “self-examination.” 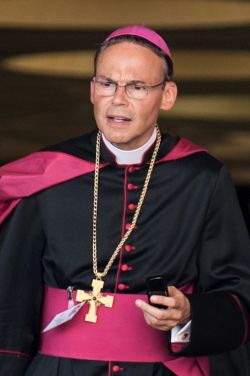 Bishop Franz-Peter Tebartz-van Elst of Limburg, Germany, leaves a meeting of the Synod of Bishops on the new evangelization at the Vatican in this Oct. 19, 2012, file photo. (CNS photo/Alessia Giuliani, Catholic Press Photo)

In early September, Cardinal Marc Ouellet, prefect of the Congregation for Bishops, sent retired Cardinal Giovanni Lajolo to visit the diocese to promote peace between the bishop and some of the diocese’s priests. In the end, the bishop agreed to publish figures about the construction project and to cooperate with the bishops’ conference commission

NEXT: Christian persecution around world has intensified, study finds