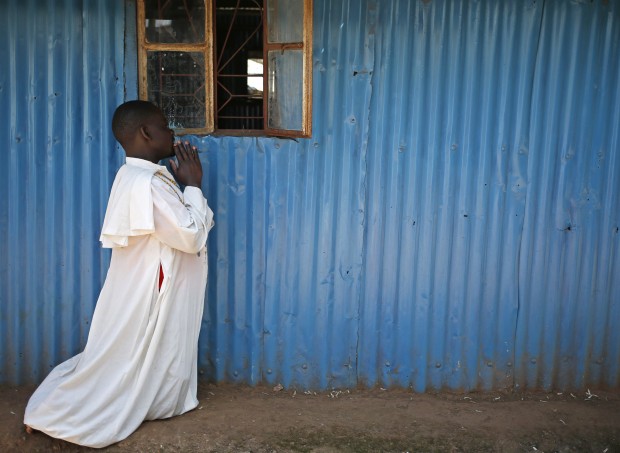 A man prays outside a church in late September during a prayer service for victims of the attack by Somali's al-Shabaab militia group at the Westgate mall in Nairobi, Kenya. (CNS photo/Goran Tomasevic, Reuters)

NAIROBI, Kenya (CNS) — Foreign intervention in the fight against al-Shabaab militants in Somalia is necessary, but not an absolute requirement, said the leader of the Catholic Church in Somalia.

“Sometimes some strike is necessary,” Bishop Giorgio Bertin of Djibouti, apostolic administrator of Somalia’s only Catholic diocese, Mogadishu, told Catholic News Service in an email when asked about a U.S. military raid on a suspected al-Shabaab leader in the town of Baraawe Oct. 5.

“The strike was also recognized by the Somali government,” Bishop Bertin said. “With criminals we have sometimes to react in the most appropriate way.”

The U.S. raid appeared to be an attempt to capture suspected militant leader Abdulkadir Mohamed Abdulkadir, a Kenyan citizen of Somali origin and an expert in logistics, according to intelligence experts.

Abdulkadir escaped and even though at least two al-Shabaab fighters died in the gunfight with U.S. Navy Seals, the failed mission is likely to boost morale and further embolden the organization, Omar Jamal, first secretary of the Somali mission to the United Nations, told Time magazine.

The al-Shabaab organization has claimed responsibility for attacking a Nairobi shopping mall Sept. 21. The Kenyan government has said the four-day siege resulted in 72 deaths and dozens of injuries. Al-Shabaab leaders said the attack was in “retribution” for Kenya’s efforts to help the Somali government defeat it.

Bishop Bertin also expressed sorrow for the loss of more than 300 migrants, many from Somalia and neighboring Eritrea, when a boat carrying African migrants sank Oct. 3 in waters near Lampedusa, Italy’s southernmost island. He called human trafficking in the Horn of Africa a major challenge.

Another accident involving a loaded migrant boat Oct. 11 claimed at least 27 lives in the same waters.

“But in this issue, the church cannot do much. … it can only keep people and the authorities aware of the problem,” the bishop said.

He added that the Catholic Church remained committed to providing human services to Somalia’s suffering population. In Baidoa, he said, a health clinic founded by Caritas Internationalis now is run by SOS Children’s Villages.

The situation in Baidoa, 160 miles northwest of Mogadishu, remains fragile, but the clinic has been respected over the years by the “authorities who control the locality,” Bishop Bertin said.

In earlier interviews, Bishop Bertin said a missionary presence in the region is difficult to maintain. He said the region is in dire need of Catholic pastoral services and that evangelization is through education and charity.

Caritas has operated health facilities and offered limited charitable services to Somalis, but under great risk because of the presence of Islamic militants throughout the country.

Bishop Bertin also expressed hope because progress continues toward building a stable national government in Somalia. The country has long been hampered by a weak central government, opening the door to the rise of various factions controlling different parts of the country.

“There are some improvements, but still the way is long,” Bishop Bertin said.

“Building a real national government in Somalia is possible,” he cautioned. “The solutions for Somalia comes from a coordinated effort from the Somalis in the country and from the international community as well as neighboring countries.”

NEXT: For Internet rulers, the Vatican is officially .catholic