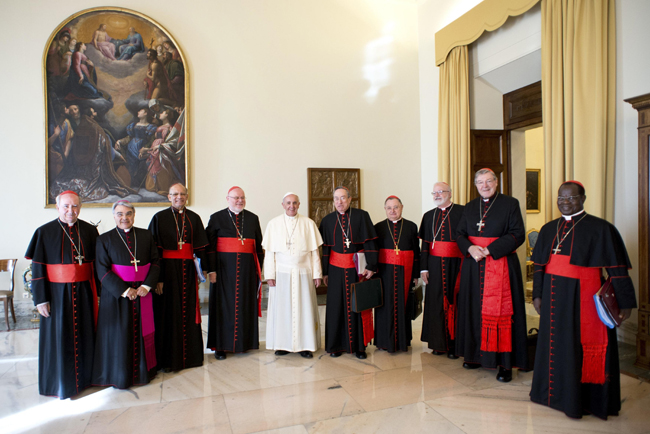 Pope Francis poses with cardinal advisers during a meeting at the Vatican Oct. 1. Eight cardinals began closed-door meetings with the pope Oct. 1 to help him reform the Roman Curia and study possible changes in the worldwide Church. (CNS photo/L'Osservatore Romano via Reuters) 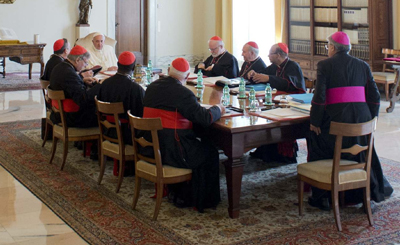 Pope Francis attends a meeting with cardinals at the Vatican Oct. 1. (CNS photo/L’Osservatore Romano via Reuters)

VATICAN CITY (CNS) — As a series of consultations aimed at the reform of the Vatican bureaucracy began, Pope Francis told his group of cardinal advisers that humility and service attract people to the church, not power and pride.

“Let us ask the Lord that our work today makes us all more humble, meek, more patient and more trusting in God so that the church may give beautiful witness to the people,” he said Oct. 1 during morning Mass in his residence, the Domus Sanctae Marthae.

The strength of the Gospel “is precisely in humility, the humility of a child who lets himself be guided by the love and tenderness of his father,” he told the cardinals.

The pope was concelebrating the Mass with the eight cardinals he chose in April to advise him on reforming the governance of the Roman Curia.

The group’s first formal meeting was to be held Oct. 1-3, with the first day of deliberations falling on the feast of St. Therese of Lisieux — a saint the pope is particularly devoted to. He once told journalists, “Whenever I have a problem I ask the saint, not to resolve it, but to take it in her hands and help me accept it.”

In his homily, the pope said the 19th-century French Carmelite nun displayed a “spirit of humility, tenderness and goodness,” as well as meekness that God “wants from all of us.”

The faithful should be imitating St. Therese’s approach of humility, patience and trust in God so that “seeing the people of God, seeing the church, (others) feel the desire to come with us,” he said.

People feel the desire to follow when they see others being living witnesses of charity, which requires being “humble, without vehemence, without conceit,” he said.

In the day’s Gospel reading from St. Luke, Jesus rebuked his disciples for wanting to “call down fire from heaven” on those who did not welcome him, the pope said.

Christians don’t take “the path of revenge,” he said; their path is humility and meekness.