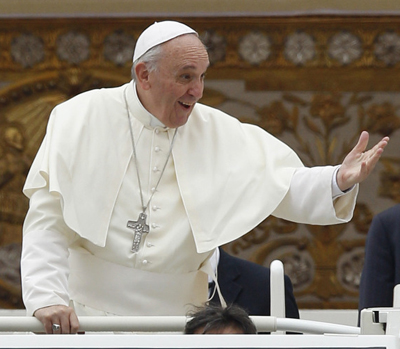 Pope Francis leaves in an open jeep after celebrating a Mass with catechists in St. Peter’s Square at the Vatican Sept. 29. (CNS photo/Paul Haring)

VATICAN CITY (CNS) — In his latest wide-ranging interview, Pope Francis said that he aimed to make the Catholic Church less “Vatican-centric” and closer to the “people of God,” as well as more socially conscious and open to modern culture.

He also revealed that he briefly considered turning down the papacy in the moments following his election last March, and identified the “most urgent problem” the church should address today as youth unemployment and the abandonment of elderly people.

The pope’s remarks appeared in a 4,500-word interview, published Oct. 1 in the Rome daily La Repubblica, with Eugenio Scalfari, a co-founder and former editor-in-chief of the newspaper.

(One observer believes an emerging furor over the pope’s comments may be attributed to inaccurate English translations of the interview conducted in Italian.)

Scalfari, an avowed atheist, publicly addressed the pope in a pair of articles on religious and philosophical topics over the summer, and Pope Francis replied in a letter that La Repubblica published Sept. 11. The journalist reported that the two met in person at the Vatican Sept. 24.

Their conversation touched on a range of topics, including economic justice, dialogue between Christians and nonbelievers, and reform of the Vatican bureaucracy.

“Heads of the church have often been narcissists, flattered and thrilled by their courtiers,” the pope said. “The court is the leprosy of the papacy.”

Pope Francis said that the Roman Curia, the church’s central administration at the Vatican, is not itself a court, though courtiers can be found there. 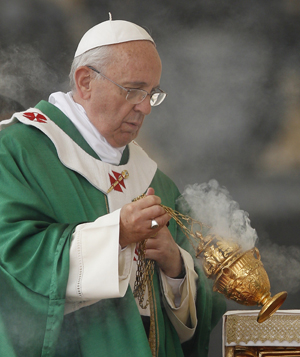 Pope Francis uses incense during a Mass for catechists in St. Peter’s Square at the Vatican Sept. 29. (CNS photo/Paul Haring)

The Curia “has one defect,” he said. “It is Vatican-centric. It sees and looks after the interests of the Vatican, which are still, for the most part, temporal interests. This Vatican-centric view neglects the world around us. I do not share this view and I’ll do everything I can to change it.”

“The most serious of the evils that afflict the world these days are youth unemployment and the loneliness of the old,” he said. “This, to me, is the most urgent problem that the church is facing.”

“The church is or should go back to being a community of God’s people,” he said. “Priests, pastors and bishops who have the care of souls are at the service of the people of God.”

In response to Scalfari’s opinion that “love for temporal power is still very strong within the Vatican walls and in the institutional structure of the whole church,” and that the “institution dominates the poor, missionary church that you would like,” Pope Francis agreed, saying: “In fact, that is the way it is, and in this area you cannot perform miracles.”

Yet the pope offered reason for hope in the eight-member Council of Cardinals advising him on church governance and reform of the Vatican bureaucracy, which he convened for three days of initial meetings that began Oct. 1.

“The first thing I decided was to appoint a group of eight cardinals to be my advisers, not courtiers but wise people who share my own feelings,” he said. “This is the beginning of a church that is not just top-down but also horizontal.”

Pope Francis called for greater commitment by the church to the alleviation of social problems, particularly those of the young and the elderly.

“The most serious of the evils that afflict the world these days are youth unemployment and the loneliness of the old,” he said. “This, to me, is the most urgent problem that the church is facing.”

While he acknowledged that addressing economic and political problems is largely the responsibility of governments and other secular institutions, he said that such problems “also concern the church, in fact, the church above all because this situation wounds not only bodies but also souls. The church must feel responsibility for both souls and bodies.”

The pope echoed his numerous earlier calls for greater restraint on market forces.

“Personally I think so-called savage liberalism only makes the strong stronger and the weak weaker and excludes the most excluded,” he said. “We need great freedom, no discrimination, no demagoguery and lots of love. We need rules of conduct and also, if necessary, direct intervention from the state to correct the more intolerable inequalities.”

The pope recalled the influence on his thinking of one of his early teachers, a “fervent communist” and “courageous and honest person,” whose “materialism had no hold over me” but who raised his awareness of an “aspect of the social, which I then found in the social doctrine of the church.”

Asked whether he agreed with the church’s disciplining of liberation theologians during the pontificate of Blessed John Paul II, Pope Francis said that liberation theology “certainly gave a political aspect to their theology, but many of them were believers and with a high concept of humanity.”

The pope said that the “church will not deal with politics,” and suggested that church leaders should not pressure Catholic office holders to take particular positions in matters of public policy.

“I believe that Catholics involved in politics carry the values of their religion within them, but have the mature awareness and expertise to implement them,” he said.

“The church will never go beyond its task of expressing and disseminating its values, at least as long as I’m here,” the pope said, agreeing that church leaders have “almost never” observed such limits.

“Everyone has his own idea of good and evil and must choose to follow the good and fight evil as he conceives them,” the pope said elsewhere in the interview. “That would be enough to make the world a better place.”

Pope Francis joked that he had been warned that his atheist interviewer might try to convert him, but the pope told Scalfari that he would not try to do likewise.

“Proselytism is solemn nonsense, it makes no sense,” he said. “We need to get to know each other, listen to each other and improve our knowledge of the world around us.”

The Second Vatican Council “decided to look to the future with a modern spirit and to be open to modern culture,” the pope said. “The council fathers knew that being open to modern culture meant religious ecumenism and dialogue with non-believers. But afterwards very little was done in that direction. I have the humility and ambition to want to do something.”

Pope Francis suggested that he and his interviewer shared a deep common ground of belief.

When Scalfari said that he believed in “being, that is, in the tissue from which forms, bodies arise,” the pope responded: “I believe in God, not in a Catholic God. There is no Catholic God, there is God, and I believe in Jesus Christ, his incarnation. Jesus is my teacher and my pastor, but God, the father, Abba, the light and the creator. This is my being. Do you think we are very far apart?”

The two also voiced similar views of clericalism. Pope Francis praised Scalfari for avoiding anti-clericalism although he is not a believer, but the journalist told the pope, “I become so when I meet a clericalist.”

Scalfari said the pope smiled and replied, “It also happens to me that when I meet a clericalist, I suddenly become anti-clerical. Clericalism should not have anything to do with Christianity.”

Pope Francis also recounted what he said was one of his rare mystical experiences, just after his election as pope, when he was “seized by a great anxiety” and even contemplated refusing the office.

“At a certain point I was filled with a great light,” he said. “It lasted a moment, but it seemed to me very long. Then the light faded, I got up suddenly and walked into the room where the cardinals were waiting and the table on which was the act of acceptance.”

The interview with Scalfari was the third long interview Pope Francis, who during his time as archbishop of Buenos Aires was known for refusing press interviews, has granted since becoming pope. The first was July 28, when he spoke to reporters on his plane flying back from Rio de Janeiro. On Sept. 19, Jesuit publications in several countries published an interview the pope had granted the previous month to Jesuit Father Antonio Spadaro.

NEXT: Children make up half the Syrian refugee population