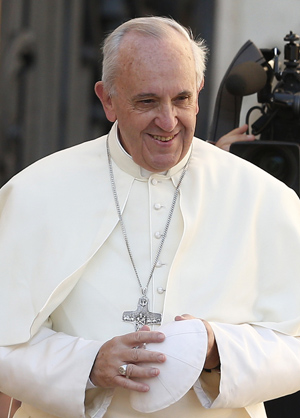 Pope Francis holds his zuchetto as he arrives to lead his general audience in St. Peter’s Square at the Vatican Oct. 2. (CNS photo/Paul Haring)

VATICAN CITY (CNS) — When Pope Benedict XVI answered a journalist’s 2010 question about condom use by offering a nuanced reflection on the ethical complexities of a hypothetical case, his words led to a worldwide media sensation, a clarification by the Vatican spokesman, and a statement from the Congregation for the Doctrine of the Faith that the pope had not changed church teaching on contraception.

Three years later, papal interviews are still making news. Pope Francis, who during his time as archbishop of Buenos Aires was known for avoiding the press, has given three wide-ranging interviews in two months, drawing headlines and heated discussion with frank statements on sexual and medical ethics, Christian dialogue with nonbelievers, and reform of the Vatican bureaucracy, among other topics.

This time, however, the Vatican is letting the pope’s words speak for themselves.

“This is a genre to which we were not accustomed,” Jesuit Father Federico Lombardi, Vatican spokesman, told reporters Oct. 2, the day after Italian journalist Eugenio Scalfari published his account of a conversation with the pope. “Let’s take it for what it is, seeking to interpret it correctly.”

Catholics have traditionally heard or read a pope’s words in certain authoritative forms: magisterial documents, such as encyclicals or apostolic exhortations, which carry the full weight of the papacy’s teaching authority; canonical decrees with the force of church law; and homilies delivered at major papal liturgies.

In all such cases, Vatican officials ordinarily review the texts prior to delivery and provide official translations in major languages to reduce the possibility of ambiguity or confusion.

Pope Francis’ addition to the magisterial, canonical and pastoral forms of papal communication, Father Lombardi said, is a genre that might be termed “conversational,” comprising not only the pope’s interviews with journalists but also his off-the-cuff homilies at daily morning Masses, of which the Vatican publishes only summaries with verbatim excerpts.

When the pope speaks spontaneously, his words should carry correspondingly less weight than in more traditional forms and contexts, Father Lombardi said. Yet lately the impact of the pope’s statements has been inversely proportional to their official status.

Encyclicals are considered the highest form of papal teaching, but Pope Francis’ first encyclical, “Lumen Fidei,” drew only a fraction of the attention his interviews have commanded; and no words from any of his homilies have been quoted nearly as often as his July 28 remark to reporters on the subject of gay people: “Who am I to judge?”

This points to one of the new genre’s clear advantages. When the pope speaks in an untraditional way, the world takes heed, and the novel charm of an informal papal voice opens up possibilities for engaging audiences ordinarily unreceptive to Vatican pronouncements. Conversation with journalists is thus a prime vehicle for what Pope Francis has called the “culture of dialogue.”

Yet, as the pope must know, this approach also poses serious risks. During informal conversation, a speaker is apt to think out loud, omit important qualifications to categorical statements, take premises for granted, and overlook how a particular formulation might lend itself to misinterpretation, innocent or otherwise.

When Pope Francis told Jesuit Father Antonio Spadaro that the “church’s pastoral ministry cannot be obsessed” with certain moral issues, including abortion, and that “it is not necessary to talk about these issues all the time,” he did not judge it necessary also to affirm the work of Catholics who promote and practice church teaching on the sacredness of unborn human life.

He did precisely that just one day after the interview’s publication, when he praised a group of Catholic gynecologists for “going against the tide, paying a personal price,” to oppose the injustice of abortion. By the Vatican’s standards, the pope’s pro-life speech carried more weight than the interview, but it reached a far smaller audience.

Pope Francis appears to recognize that distinctions between the magisterial and conversational are lost on most listeners and readers, who are unversed in theology and encounter his words in the fragmentary form of news reports. Hence the pope has laced his words to journalists with reminders that he is not making “ex cathedra” pronouncements but expressing personal opinions.

He qualified some of his most newsworthy statements to Scalfari in that way.

“I do not share this view and I’ll do everything I can to change it,” the pope said of what he called the Roman Curia’s “Vatican-centric” mentality.

“This, to me, is the most urgent problem that the church is facing,” he said of youth unemployment and abandonment of the elderly.

“Personally I think so-called savage liberalism only makes the strong stronger and the weak weaker and excludes the most excluded,” he said of the need for greater restraints on market forces.

“I believe that Catholics involved in politics carry the values of their religion within them, but have a mature conscience and the competence to implement them,” he said, explaining why the “church will never go beyond its task of expressing and disseminating its values, at least as long as I’m here.”

That last qualification — “at least as long as I’m here” — was at once a firm assertion of leadership and a frank admission that future popes might take another line. It thus epitomized the distinctive combination of traits — humility and ambition — that Pope Francis attributed to himself in the same interview.

For many Catholics, it will take time to get used to a pope speaking not only as priest, prophet and king, but also as a fellow member of the “people of God,” voicing personal priorities and views that do not have the status of church teaching.

As novel as this aspect of Pope Francis’ pontificate may be, it is also one of several, for the most part overlooked, threads of substantial continuity with his stylistically very different predecessor.

“This book is absolutely not a magisterial act,” Pope Benedict wrote in the foreword to the first volume of his “Jesus of Nazareth” trilogy, which he pointedly published under the name Joseph Ratzinger. “So everyone is free to disagree with me. I ask only that my readers begin with that attitude of good will without which there is no understanding.”