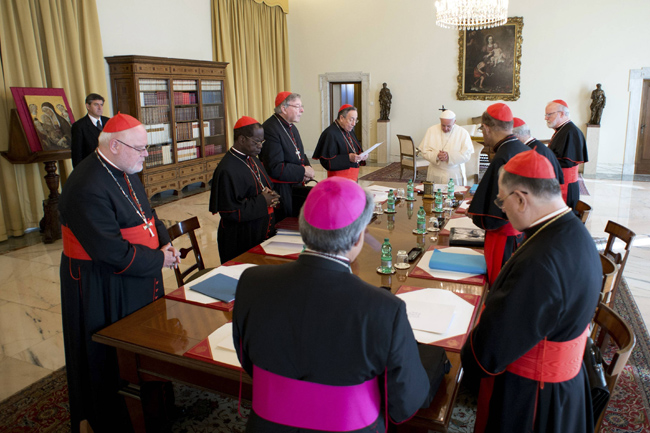 VATICAN CITY (CNS) — Pope Francis and his international Council of Cardinals are laying out plans to completely overhaul the Roman Curia, underlining its role of “service to the universal church and the local churches,” the Vatican spokesman said.

As the pope and the eight cardinals he named to advise him were about to begin the final session of their Oct. 1-3 meeting, Jesuit Father Federico Lombardi, the spokesman, said the role and responsibilities of the Vatican secretary of state, the revamping of the world Synod of Bishops, and the Vatican’s attention to the role and responsibility of laity also were major themes of discussion.

Father Lombardi said the group’s agenda was partially dictated by the pope’s own timetable. Pope Francis has named Archbishop Pietro Parolin to be his secretary of state and has given him an Oct. 15 start date, so it made sense to discuss how the pope and cardinals see his role in a renewed curia.

Under the terms of Blessed John Paul II’s constitution “Pastor Bonus,” a 1988 reform of the curia, the Secretariat of State includes two sections: One section deals with foreign relations and the other deals with internal church matters. “Pastor Bonus” said the secretariat was to “foster relations” with other Curia offices and “coordinate their work.”

Father Lombardi said the pope and the cardinals emphasized the role of the Secretariat of State as “the secretariat of the pope,” and said the discussions included “the hypothesis of a new figure — the ‘moderator of the curia'” to ensure greater communication and cooperation among the Curia offices.

The discussions, Father Lombardi said, are going clearly in the direction of an apostolic constitution to replace “Pastor Bonus,” and not simply “cosmetic retouches or marginal modifications” of the 1988 document.

Possible changes to the organization of the world Synod of Bishops, which has been a periodic gathering of bishops from around the world to discuss a specific theme of church life, were moved to the top of the meeting’s agenda because the synod council will meet at the Vatican Oct. 7-8, the spokesman said.

Father Lombardi said the pope is expected to decide the theme for the next synod “in the coming days.”

The eight cardinals — six of whom currently serve as diocesan bishops — brought to the meeting with the pope suggestions they received from church leaders around the world. One of the topics mentioned most often, Father Lombardi said, was concern for the role of the laity in the church and the world.

The pope and his cardinal advisers talked about “how to ensure that this dimension of the church’s reality is more adequately and effectively recognized and followed in the governance of the church,” Father Lombardi said.

The vast majority of the Catholic Church’s 1.2 billion members are laypeople, the spokesman said. Their activities and needs are followed by the Pontifical Council for the Laity, which is “very active,” he said, but does not have the profile or authority of a Vatican congregation, such as those for bishops, for priests and for religious.

The Council of Cardinals is expected to meet again in January or February, Father Lombardi said, and to continue corresponding with each other and with Pope Francis in the meantime.

NEXT: Pope: Are ‘justice’ and ‘solidarity’ just words in a dictionary?