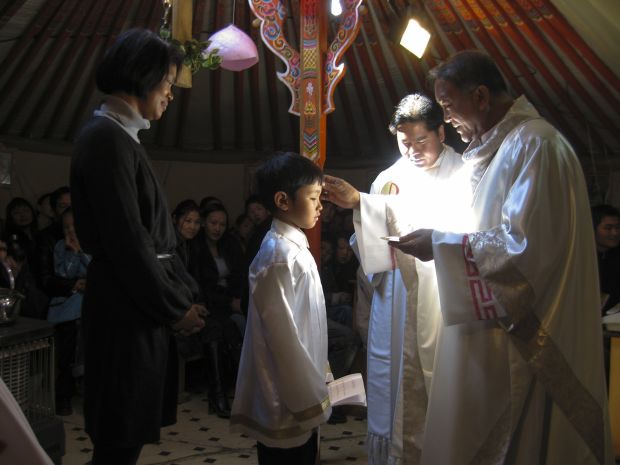 PERTH, Australia (CNS) — When Bishop Wenceslao Padilla arrived in Mongolia with two other missionary priests in 1992, there were no Catholics in the Central Asian country.

His mission was much like that of the early apostles: to take Catholicism to a land that had not yet encountered it.

Twenty-one years later, there are more than 900 Catholics in Mongolia, 71 religious priests and sisters from 12 congregations, four Catholic parishes and a 600-seat cathedral in the capital, Ulan Bator.

In a recent interview while visiting Perth, Bishop Padilla said he found the progress of the Catholic Church in the former communist nation astounding, but that challenges remained.

He told The Record, newspaper of the Archdiocese of Perth, that while he was pleased with the gradual spread of Catholicism, the Mongolian church remains very much in its infancy.

“When I see the people who have joined the Catholic faith, I am really very happy,” he said.

“But there is a pinch of sadness, too, because, of the 900 converted Mongolian brothers and sisters, around 19 or 20 percent are already leaving the church. The nomadic mentality is still very active in the Mongolian life.”

Reversing that trend is a major challenge, he said, noting that other important issues also require attention. Among them is the government’s recently adjusted quota system for foreign missionaries.

Previously, for every 40 foreign missionaries working for the church, 60 locals were required to be employed. But the quota has increased.

“Now, for every 25 foreign missionaries, you have to employ 75 Mongolian locals, but we cannot have any more local workers. We don’t have the money to pay salaries,” Bishop Padilla said.

The unexpected change caught the Mongolian church off guard.

“We are around 16 missionaries over the quota, so either we have to send the 16 away or to increase our workers by another 66, added to the 200 Mongolians we already have,” Bishop Padilla explained.

While negotiations with the government have given the church time to amend the imbalance, Bishop Padilla said Catholicism in Mongolia remains under constant threat.

Even so, the missionary team opened the first Catholic elementary school in September 2012 and has 85 children in its kindergarten class and another 60 on a waiting list. To the bishop, that is a hopeful sign.

Establishing Catholicism in Mongolia was the last thing the Philippines-born bishop expected to be doing in ministry. After his ordination for the Congregation of the Immaculate Heart of Mary in 1976, his first assignment was as a parish priest in Taiwan. After five years, he was named regional superior for the order there for another six years.

After the collapse of communism in 1989, Mongolia began to establish diplomatic relations with countries worldwide, including Vatican City.

That led Blessed John Paul II to ask the congregation to lead the missionary work in Mongolia. Bishop Padilla, then a priest, volunteered when the order appealed for priests to initiate the effort. The bishop said he was inspired largely by the example of his father, who died shortly before the mission in Mongolia began.

“He had been a religious educator and a catechist for 36 years,” Bishop Padilla recalled. “He was doing missionary work in the mountain provinces of the Philippines. I owe him a lot and also my mother, who is still alive. She is 97 years old.”

The three priests started with nothing. Mass was celebrated in parlors and living rooms in apartments they rented. As the number of Catholics grew, seven times they moved to larger venues. In 2003, the Cathedral of Sts. Peter and Paul was dedicated.

Mass also is celebrated in four parishes and five other locations in Ulan Bator.

The Mongolian capital has undergone a major transformation since the mission began. Today, the city has high-rise buildings and a growing market-based economy, he said.

While some foreigners still call Mongolia “the hardship country,” Bishop Padilla said living conditions are improving and the number of homeless children is declining.

“But we still have people who are very poor,” he added.

Remnants of the communist regime remain in the minds of some people, particularly government officials, Bishop Padilla said.

“They don’t like religions to operate. They think we are the opium of the people. But it’s getting less and less, because many of these government officials now are young people who have been educated in Europe or democratic countries,” he said.

About 80 percent of Mongolia’s population of 2.8 million practices Buddhism. In addition, some 200 Protestant denominations are reaching out to people who may never have encountered any organized religion before.

But Catholicism is making steady progress, and Bishop Padilla said he feels fulfilled with the work being done, especially through two centers for orphaned children. He expects the efforts will change the nation for the better.

“I would like to change the mentality of the people from nomadic to a sedentary form, which is civilization,” he said. “That means a lot of education has to be inculcated in the minds of the people, starting from the lowest levels of education to the highest levels.”

PREVIOUS: Theory of one hominid species is compatible with faith, experts say

NEXT: Young and old join pope to celebrate joy of family life