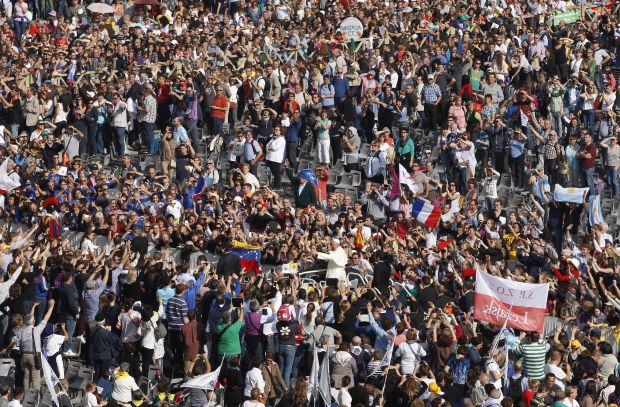 Pope Francis greets the crowd after celebrating a Mass for families in St. Peter's Square at the Vatican Oct. 27. (CNS photo/Paul Haring)

VATICAN CITY (CNS) — A Catholic wedding is not simply a beautiful ceremony; through the sacrament of marriage a couple receives from God the grace they will need to fulfill their mission in the world, Pope Francis said.

Addressing an estimated 100,000 people who came St. Peter’s Square Oct. 26 for a Year of Faith celebration of family life, Pope Francis said Catholic spouses are not naive; they know difficult moments will come.

But vowing to love one another in sickness and health, joy and sorrow all the days of their lives, Catholic couples put their lives in the hands of God and rely on him for strength.

“They do not run away; they do not hide; they do not shirk the mission of forming a family and bringing children into the world,” the pope said.

For hours before the pope arrived, singers and storytellers took the stage in St. Peter’s Square, recounting the greatness of love and family life and the importance of forgiveness.

Volunteers went through the crowd handing out red, green, orange, yellow, blue and violet balloons. Despite the master of ceremonies’ plea to hang on to the helium-filled balloons until everyone was told to release them, throughout the evening balloons dotted the skies over St. Peter’s Square.

Pope Francis, who was given a balloon in the atrium of St. Peter’s Basilica, entertained the little ones who were to escort him to the stage by letting his go, too.

The evening’s formal program began with a little girl identified only as Federica showing the pope a drawing she made of her mother teaching her to cook cutlets. She said it is her favorite food and “I could eat them for breakfast, lunch, dinner and snack time.”

Federica said her mom also taught her to make the sign of the cross, and Pope Francis asked all the children, if they knew how, to join him in beginning their encounter “in the name of the Father, Son and Holy Spirit.” 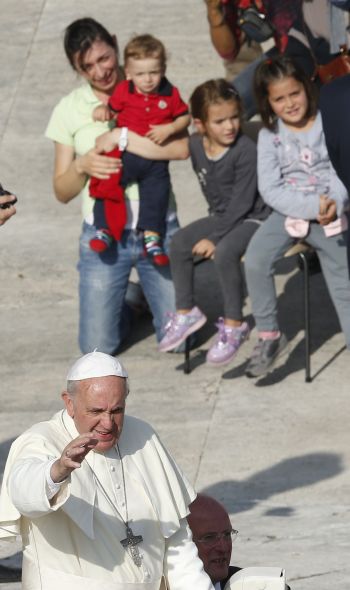 Pope Francis waves as he leaves after celebrating a Mass for families in St. Peter’s Square at the Vatican Oct. 27. (CNS photo/Paul Haring)

Dozens of people — from children to grandparents — were invited to speak to the pope and the crowd, sharing the story of their family lives.

Wassim and Karol Maqdissi, a couple from Syria, talked about fleeing their home and finding refuge in Jordan. The people gathered in the square offered special prayers for peace in Syria and offered money to help Caritas care for the victims of the war.

Other stories came from residents of Lampedusa, the island off Italy’s southern coast, and from two African migrants who made dangerous sea crossings to get to the island.

In his talk at the gathering, Pope Francis said that at the heart of everyone’s vocation is the call to love and be loved.

“Life is often wearisome. Work is tiring. Looking for work is exhausting,” he said. “But what is most burdensome in life is a lack of love.”

Pope Francis said he knows many families are struggling financially and emotionally, others are threatened by war or split apart by migration, and many young people would like to marry but they don’t see how they can without a home and good job.

“The Lord knows our struggles and the burdens we have in our lives,” he said. “But he also knows our great desire to find joy and rest.”

Pope Francis urged Catholic couples to go against the cultural trend of seeing everything, including relationships, as fleeting. Marriage is a life-long journey, he said, “a long journey, not little pieces.”

Family life is filled with beautiful moments like shared meals, walks in the park and visits to the grandparents, Pope Francis said. “But if love is missing, joy is missing; nothing is fun.”

For families, as for all Christians, he said, Jesus is the source of endless love. Couples, he said, must pray together “because they need to for the long journey they are making together.”

Pope Francis also told the crowd that three phrases are essential for a peaceful family life: “‘May I?’ to make sure you aren’t being intrusive, ‘Thank you’ and ‘I’m sorry.'”

The next morning, Pope Francis was back in St. Peter’s Square celebrating Mass with the families. And, again, he spoke of the importance of praying as a family.

He said he knew many of them were thinking that it sounds like a nice thing to do, but they can’t imagine finding the time.

“We need simplicity to pray as a family,” he said. “Praying the Our Father together around the table is not something extraordinary; it’s easy. Praying the rosary together, as a family, is very beautiful and a source of great strength.”

Through family prayer, going to church together and even the simple task of teaching children to make the sign of the cross, he said, the family also is the place where the Christian faith is kept alive and passed on.

The faith, he said, is not “a personal treasure like a bank account” or something to be kept “in a strong box,” he said. A faith that is not shared with others might as well be “embalmed,” he added.