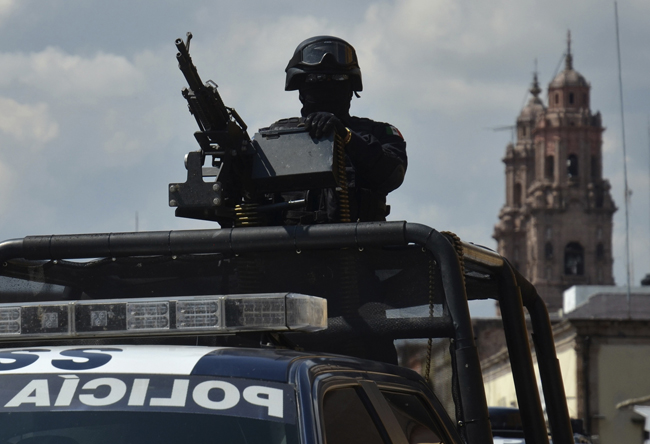 A federal police officer mans a weapon atop a vehicle in the Mexican state of Michoacan Oct. 28. Some at St. James the Apostle Parish in a rural pocket of Michoacan formed self-defense groups earlier this year to protect themselves from extortion attempts and attacks by organized criminal groups. (CNS photo/Alan Ortega, Reuters)

MEXICO CITY (CNS) — Some at St. James the Apostle Parish formed self-defense groups earlier this year to protect themselves from extortion attempts and attacks by organized criminal groups in a rural pocket of Mexico’s western Michoacan state. Others from the region known as Tierra Caliente fled to the United States, said Father Andres Larios, pastor at St. James in Coalcoman.

Many more, however, feel trapped, including Father Larios, who has not left Coalcoman in months.

“It’s almost as if we’re in a sort of civil war,” he said of the state of affairs in Michoacan.

In an open letter in mid-October, his superior, Bishop Miguel Patino Velazquez of Apatzingan, called Michoacan “a failed state,” and said “criminal groups contest it … as if it were a jackpot.”

Violence once again flared in Michoacan as criminal groups attacked 18 substations and installations operated by the Federal Electricity Commission Oct. 27, leaving more than 400,000 customers in the dark.

“Where there are self-defense groups, crime has stopped,” said the pastor of a Catholic parish in Mexico’s western Michoacan state.

The violence plunged the state deeper into crisis as multiple drug cartels — most notorious among them, the Knights Templar — battle for control of criminal proceeds in a state appearing increasingly ungovernable. Their alleged crimes range from making methamphetamines to extorting avocado growers to taxing each ton of iron ore mined in the state and shipped overseas.

The situation has created concern for Catholic officials, who have called on the state and federal governments to take action and promised to continue tending to the needs of those impacted by crime.

“In (our) communities we hear real dramas daily from persons and families who live in fear and desperation,” wrote Archbishop Alberto Suarez Inda of Morelia, capital of Michoacan, in an Oct. 27 open letter to state Gov. Fausto Vallejo Figueroa.

“We commit ourselves to continue collaborating in (providing) pastoral attention to victims of violence and in the reconstruction of the social fabric, favoring a culture of respect for the rule of law and peace,” the Mexican bishops’ conference said in an Oct. 27 statement signed by the conference president, Cardinal Francisco Robles Ortega of Guadalajara, and vice president, Auxiliary Bishop Eugenio Lira Rugarcia of Puebla.

Michoacan was where former President Felipe Calderon first sent soldiers in December 2006 as part of an organized crime crackdown that has claimed more than 70,000 lives. Calderon left office last December, but the new administration of President Enrique Pena Nieto also has had to focus on security in Michoacan.

Bishop Patino painted a bleak picture in his open letter.

“Forced abductions, kidnaps, killings, extortions … have increased, and entire families have had to emigrate,” he wrote.

“Municipal governments and the police are subordinate and in collusion with criminals, and the rumor increasingly grows that the state government is at the service of organized crime,” the bishop said.

Self-defense groups have subsequently surged, leading to government allegations of organized criminal groups being behind them. Father Larios disagreed.

“Where there are self-defense groups,” he said, “crime has stopped.”