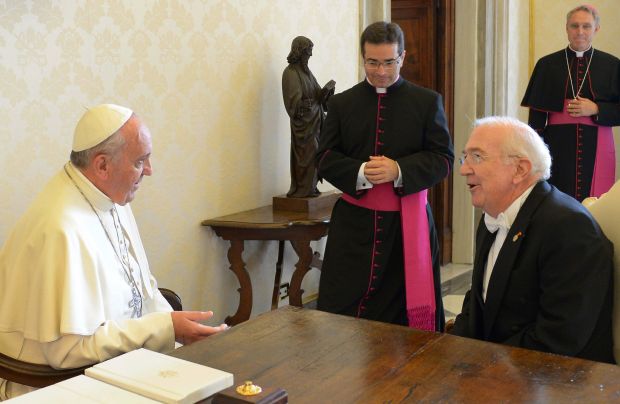 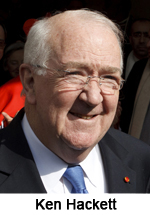 VATICAN CITY (CNS) — Presenting his credentials to Pope Francis, Kenneth F. Hackett officially took over as U.S. ambassador to the Holy See Oct. 21, filling a role that had been vacant for nearly a year.

“The United States and the Holy See have converging interests that span a broad range of issues” including “human rights and social justice,” Hackett wrote the same day, in the first post on his official ambassador’s blog.

“We both work to make a difference on a range of important global issues such as trafficking in persons, interreligious dialogue, conflict resolution, food access and security, HIV/AIDS and care for the environment,” wrote Hackett, a former president of Catholic Relief Services, the U.S. bishops’ overseas relief and development agency.

The United States has not had an ambassador at the Vatican since November 2012, when Miguel H. Diaz resigned and left Rome to become a professor of faith and culture at the University of Dayton in Ohio.

During Diaz’s tenure, relations between Washington and the Vatican were marked by tension, particularly over the Obama administration’s plan to require that all heath insurance plans, including those offered by most Catholic institutions, cover sterilizations and contraceptives, which are forbidden by Catholic moral teaching. The plan prompted Pope Benedict XVI and the papal nuncio to the U.S. to issue public warnings of a threat to Americans’ religious freedom.

“There will be times where the position of the (Obama) administration differs, obviously, from the Holy See,” Hackett told the Catholic Review, Baltimore’s archdiocesan newspaper, last August. “But I am going to look for — as many of my predecessors did — those opportunities where we can come together and find strength in collaboration, coincidence of interests.”

Hackett is a former president of CRS, the U.S. bishops’ overseas relief and development agency, which he first joined in 1972 after a post-college stint with the Peace Corps in Ghana. He retired as president of CRS in December 2011.

The new ambassador is also a former North American president of Caritas Internationalis, the confederation of humanitarian agencies of the Catholic Church, and a former member of the board of the Pontifical Council Cor Unum.

He told the Catholic Review in August that he was looking forward to reconnecting in Rome with the sort of people he had befriended during his years in relief work: “holy people who are trying their best.”

“I missed that in the last year I’ve been retired. You don’t see those kind of people anymore, that bishop from Congo who has so many stories to tell at supper, of so much hardship,” he said. “I want to re-establish those relationships and use them to, basically, improve U.S. policies.”

NEXT: Pope meets German bishop at center of spending controversy