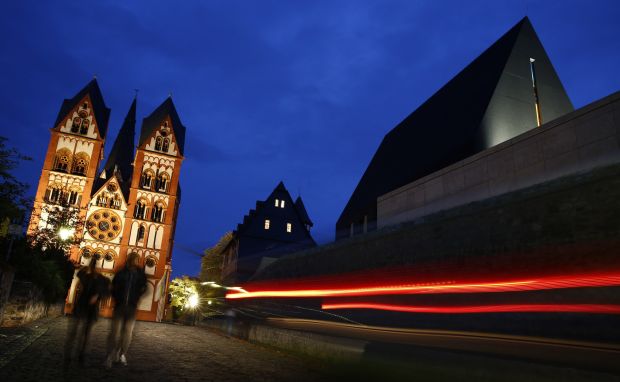 A car drives past the residence of Bishop Franz-Peter Tebartz-van Elst and the Catholic cathedral in Limburg, Germany, Oct. 14. (CNS photo/Kai Pfaffenbach, Reuters)

VATICAN CITY (CNS) — After giving a morning Mass homily on the virtue of poverty, Pope Francis held a private meeting Oct. 21 with a German bishop under fire for a massive building project that critics have denounced as extravagant.

The Vatican press office announced the pope’s meeting with Bishop Franz-Peter Tebartz-van Elst of Limburg, but would not comment on details of their discussion.

Pope Francis made no mention of the bishop at Mass that morning, but he focused his homily on how money can destroy families and relationships. Material goods must be used to benefit others or they risk becoming idols and the object of conflict, he said.

The German program of Vatican Radio said it was unlikely Pope Francis would order any changes in the diocese before the completion of an audit commissioned by the German bishops’ conference, unless Bishop Tebartz-van Elst “offers his resignation.”

Archbishop Robert Zollitsch, the bishops’ conference president and recently retired archbishop of Freiburg, met with Pope Francis Oct. 17 and later told reporters he had discussed the Limburg situation with the pope.

The archbishop said he left the meeting feeling “strengthened and encouraged,” but he refused to give more details because he said the meeting was confidential.

“All sides are interested in a good and speedy solution in order to bring tranquility back to the Diocese of Limburg and to find a way out of this difficult situation,” the archbishop said.

Bishop Tebartz-van Elst, who arrived in Rome Oct. 13, has been a target of protests for allegedly spending close to $40 million in renovations and new construction on his residence and diocesan offices, and for allegedly making false statements in court.

Archbishop Zollitsch told reporters Oct. 14 that he expected the bishop to do some serious “self-examination.”

In early September, Cardinal Marc Ouellet, prefect of the Congregation for Bishops, sent retired Cardinal Giovanni Lajolo to visit the diocese to promote peace between the bishop and some of the diocese’s priests. In the end, the bishop agreed to publish figures about the construction project and to cooperate with the bishops’ conference commission.