Pope, in Assisi, calls on church to renounce ‘spirit of the world’ 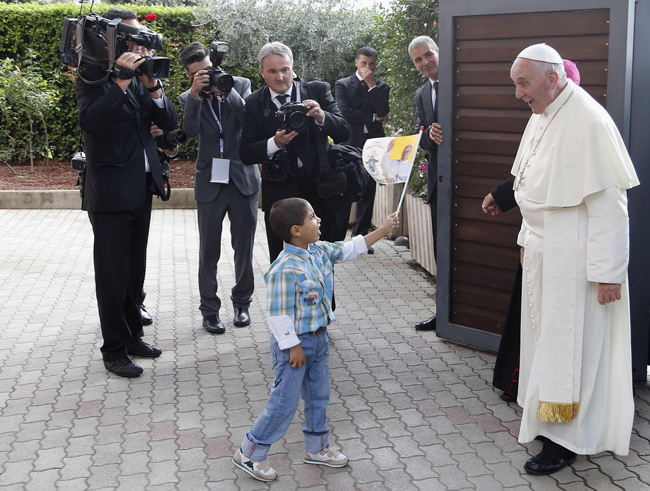 A child waves a flag as Pope Francis arrives at the Caritas residence in the Italian pilgrimage town of Assisi Oct. 4. The pontiff was making his first pilgrimage as pope to the birthplace of his papal namesake. (CNS photo/Stefano Rellandini, Reuters) 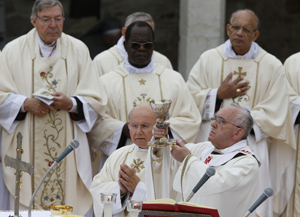 Pope Francis celebrates Mass in the piazza outside the Basilica of St. Francis in Assisi, Italy, Oct. 4. (CNS photo/Paul Haring)

ASSISI, Italy (CNS) — Making his first pilgrimage as pope to the birthplace of his papal namesake, Pope Francis called on the whole church to imitate St. Francis of Assisi, embracing poverty and stripping itself of the “spirit of world.”

“A Christian cannot coexist with the spirit of the world,” he said. Worldliness “leads us to vanity, arrogance, pride. And this is an idol, it is not of God.”

The pope spoke Oct. 4, the feast of St. Francis, in the “stripping room” of the Assisi archbishop’s residence, where the saint shed himself of his rich clothes and embraced a life of poverty.

“This is a good occasion for inviting the church to strip itself,” the pope said, adding that he directed his invitation not merely to the hierarchy but all the church’s members, and that he sought renunciation of spiritual complacency as well as material riches.

“It is so sad to find a worldly Christian, who thinks he enjoys the security of the faith and of the world. One can’t have it both ways.”

The pope was accompanied to Assisi by the eight-member Council of Cardinals he has appointed to advise him on governance of the universal church and reform of the Vatican bureaucracy, and with whom he concluded an initial series of meetings Oct. 3 at the Vatican.

Pope Francis’ talk in the archbishop’s residence, one of six addresses he was scheduled to deliver during his daylong visit to Assisi, was to a group of poor people receiving assistance from local Catholic charities, whom he later joined for lunch.

“Many of you have been stripped by this savage world, which doesn’t provide work, which doesn’t help, to which it makes no difference that children die of hunger,” he said.

The pope mourned the African immigrants killed in the previous day’s sinking of a boat near the southern Mediterranean island of Lampedusa, where in July he made his first trip as pope outside Rome.

“It doesn’t matter (to the world) that people must flee slavery and hunger in search of liberty. With how much pain, so often, we see that they find death,” he said. “This is a day of weeping. The spirit of the world does these things.”

As he often does, the pope set aside his prepared remarks and spoke entirely off the cuff.

He did the same thing earlier in the morning, when he addressed a group of disabled children and young people and their caregivers at a church-run rehabilitation center, the first of a dozen stops on his tightly packed schedule.

Pope Francis spent about 45 minutes prior to his talk personally greeting the young patients, many of whom were confined to wheelchairs. Throughout his visit, the room resounded with their cries and moans.

The pope noted that Jesus’ body after the resurrection was unblemished except for the five wounds he had received during his crucifixion.

“He wanted to preserve only the wounds, and he took them with him into heaven,” the pope said. “We treat the wounds of Jesus here and he, in heaven, shows us his wounds and tells all of us, all of us: ‘I am waiting for you.'”

In the pope’s undelivered remarks at the rehabilitation center he called for more “works of the culture of welcome, works animated above all by profound Christian love, love for Christ crucified, for the flesh of Christ.”

The pope’s morning in Assisi culminated in a Mass he celebrated in the square outside the Basilica of St. Francis.

In his homily, the pope disputed what he characterized as popular misconceptions of St. Francis and his legacy.

“Many people, when they think of St. Francis, think of peace,” he said. “Very few people, however, go deeper.

“What is the peace which Francis received, experienced and lived, and which he passes on to us?” the pope asked. “It is the peace of Christ, which is born of the greatest love of all, the love of the cross.”

He later added: “Franciscan peace is not something saccharine. Hardly. That is not the real St. Francis. Nor is it a kind of pantheistic harmony with the forces of the cosmos. That is not Franciscan either; it is a notion some people have invented.”

Celebrating St. Francis’ love for all creation, the pope said that the saint “bears witness that man is called to safeguard man, that man is at the center of creation, where God the creator wanted him.”

Pope Francis also paid tribute to his namesake as a “man of harmony and peace” and drew attention to those “who are suffering and who are dying because of violence, terrorism or war, in the Holy Land, so dear to St. Francis, in Syria, throughout the Middle East and everywhere in the world.”

The pope’s day in Assisi included visits to various sites associated with St. Francis, including his tomb in the Basilica of St. Francis; the Church of San Damiano, where the saint had a vision of Jesus; the hermitage where he went to pray in isolation; the small “Porziuncola” church, now contained inside the Basilica of Santa Maria degli Angeli, where he founded the Franciscan order; the tomb of his friend St. Clare; and the cathedral where St. Francis and St. Clare were baptized.

In a short impromptu talk to cloistered nuns at the Basilica of St. Clare, the pope voiced sympathy over the challenges of community life and urged them to strive for harmony.

“The devil takes every opportunity to divide. He says, ‘I don’t wish to speak ill but …’ And the division begins,” the pope said. “Foster friendship among yourselves, family life, love, that your monastery not be a purgatory but a family.”

Later in the afternoon, addressing diocesan clergy, religious and laity in the cathedral, Pope Francis charmed the crowd like a folksy parish priest, drawing frequent laughter and applause.

“Enough with these interminable, boring homilies of which nothing can be understood,” said the pope, who favors short sermons typically based on three key words.

Encouraging pastors to be close to their flocks, the pope recalled one who had told him that he knew the names of all the families — and the dogs — in his parish. “What could be more beautiful?” he asked.

“I always advise newlyweds: ‘Argue as much as you want,'” he said. “‘If the plates fly, let them. But never let the day end without making peace, never.'” 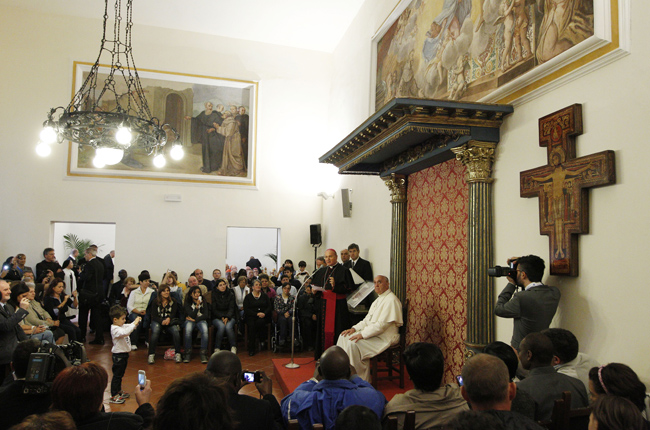 Pope Francis leads a meeting with the poor in the archbishop’s residence in Assisi, Italy, Oct. 4. The meeting was in the famous “stripping room,” where St. Francis stripped off his rich clothes, gave them to his father and began a life of poverty dedicated to Christ. (CNS photo/Paul Haring)

PREVIOUS: Pope: Are ‘justice’ and ‘solidarity’ just words in a dictionary?

NEXT: Pope calls synod to discuss families, divorce and remarriage