Pope: Are ‘justice’ and ‘solidarity’ just words in a dictionary? 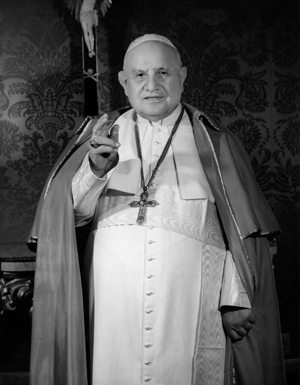 Pope John XXIII is pictured in a portrait circa 1958. (CNS photo)

VATICAN CITY (CNS) — The Cold War has ended and the Berlin Wall has fallen, but war and the threat of war continue and migrants are still dying as they travel in search of safety and a better life, Pope Francis said.

Addressing a conference marking the 50th anniversary of Blessed John XXIII’s encyclical “Pacem in Terris” (“Peace on Earth”), Pope Francis asked whether “‘justice’ and ‘solidarity’ are just words in our dictionary or do we all work to make them a reality?”

The world still has far to go, he said Oct. 3, as he offered prayers for an estimated 500 migrants whose boat from Africa sank off the Italian coast. As the pope was speaking, Italian authorities were searching for survivors; they said close to 150 migrants already had been rescued and 82 dead bodies had been recovered.

The tragedy, which the pope described as “a disgrace,” took place off the island of Lampedusa, which Pope Francis had visited July 8 after similar tragedies. He had tossed a wreath of white and yellow flowers into the Mediterranean Sea in memory of the estimated 20,000 African immigrants who have died in the past 25 years trying to build a new life in Europe.

Addressing the participants in the “Pacem in Terris” conference, organized by the Pontifical Council for Justice and Peace, Pope Francis tied the migrants’ tragedy to the “inhuman global economic crisis, a serious symptom of a lack of respect for the human person.”

“Pacem in Terris,” published in 1963, was Blessed John XXIII’s last encyclical. Addressed to all people of good will, and not just Catholics, the letter tried to address people’s hopes and fears at the height of the Cold War and in the wake of the Cuban missile crisis. Blessed John called for international and interreligious cooperation in the promotion of world peace, emphasizing the importance of human rights and dignity.

The Oct. 2-4 commemorative conference in Rome focused on educating a new generation of Catholics for political involvement and leadership, on challenges facing the United Nations and the international community, and on modern challenges to establishing a culture of peace.

The 76-year-old Pope Francis began his talk to the group by recalling the Cuban missile crisis, when “humanity found itself facing a global atomic conflict.” He reminded his audience of Blessed John’s radio appeal to world leaders, “May they hear the anguished cry which rises to heaven from every corner of the earth, from innocent children to old men, from persons and communities: Peace, peace!”

“The seeds of peace sown by Blessed John XXIII bore fruit,” the pope said, citing the end of the Cold War. “But despite the fact that walls and barriers have fallen, the world continues to need peace and the appeals of ‘Pacem in Terris’ remain strongly relevant.”

Today, like 50 years ago, he said, the foundation of peace is the recognition of the divine origin of the human person, which must be evident in how individuals and communities promote, respect and safeguard the dignity of every human being.

Respect for the person means not only guaranteeing their political and civil rights, the pope said, but also “offering each person the possibility of having effective access to the essential means of sustenance: food, water, shelter, health care, education and the possibility of forming and supporting a family.”

Pope Francis said it is not the task of the Catholic Church to dictate specific political, economic and social policies to reach those aims, but it does insist on the need for “dialogue, listening, patience, respect for others, sincerity and also a willingness to reconsider one’s personal opinions.”

“There cannot be true peace and harmony if we do not work for a society that is more just and marked by solidarity, if we don’t overcome selfishness, individualism and special interests at every level,” he said.

NEXT: Pope, in Assisi, calls on church to renounce ‘spirit of the world’