New forms of Catholic life, a new seminary, and ‘The Way’

Over the centuries, the Church has needed new life many times.  And God has always called up new men and women to do the work.  From the early Benedictines in the sixth century; to the Dominicans and Franciscans in the Middle Ages; to the Jesuits at the time of the Reformation, God has used new forms of zeal and community to advance Catholic life.

The 20th century saw an explosion of new Catholic forms of life, both before and after Vatican II: Opus Dei, Focolare, Communion and Liberation, the Christian Life Movement and many others.  Each has a distinct identity.  Each has a unique mission.  But led faithfully, all serve the Church by re-energizing Catholics who’ve grown cold in a culture that feeds the senses and starves the spirit.  In my 25 years as a bishop. I’ve been struck again and again by the joy these new forms of service and community bring to Catholic life.  They’re a treasure for the Church.  We need to encourage them here in Philadelphia.

One of the most dynamic of the new forms of life and service is the Neo-Catechumenal Way – or simply “The Way” as members know it.  The Way began in Spain in the years after Vatican II, focused on service to the poor.  As time passed, The Way developed into a complete way of life; a profound and on-going formation in Christian living based on the catechumenate – the period of basic instruction in the Christian faith — of the Early Church.  The Way sees itself very specifically as a tool for bishops and parish pastors to advance the new evangelization.  Today The Way has hundreds of communities across the globe, including scores of Redemptoris Mater (“Mother of the Redeemer”) missionary seminaries.  Families in The Way often go on mission themselves.  They engage in extraordinary Christian generosity. 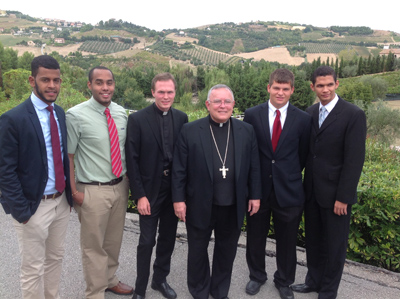 Archbishop Chaput poses with several of the seminarians coming to the Archdiocese of Philadelphia for the Neo-Catechumenal Way.

Bill Beckman, a friend and former staff member of mine from years past, has been active in The Way, along with his wife and children, for a long time.  One of Bill’s sons recently chose to pursue the priesthood at one of The Way’s new missionary seminaries, and Bill offered his thoughts as a father in an email:

“A missionary seminary is built upon a missionary charism.  It’s a necessity.  The seminarians, who have discerned a call from God, acknowledge that call by placing themselves at God’s disposal with a willingness to go wherever they are sent.  At the recent [gathering] of more than 350 aspiring seminarians in Porto San Giorgio, Italy, [young men of the Neo-Catechumenal Way were] sent to more than 90 seminaries scattered over six continents.  Young men from the United States were sent to seminaries in Ukraine, India, America, South Africa and Guam.  They let go of attachment to home and family relationships for the sake of doing the will of God in service to his Church.  This may sound very unusual to some of us, but in Jewish and Christian history it’s not.

“Abraham left his father’s native place and started walking to an unknown place where God would fulfill his promises.  God called Moses to lead the Israelites out of the bondage of Egypt.  The prophets all received calls to speak the word of God under difficult circumstances in the places God willed.  The Virgin Mary responded in faith to the message of the angel without knowing that it would lead to the foot of the Cross.  Joseph obeyed the message of an angel he heard in a dream and took the Child and his mother into Egypt to escape Herod’s murderous intention.  Jesus, faithful to his mission, made the ascent to Jerusalem and trod the path to Calvary.  The apostles and their companions carried the Gospel to the nations, and this same dynamic movement of the Spirit has driven our missionary Church throughout the centuries.

“American history is full of stories of missionary dynamism, and this time of great change for the Church is no different.  Pope Francis constantly speaks of ‘going out,’ accompanying those who are far away, on the periphery, or who are little regarded.  The Church needs a new evangelization, one not rooted in comfortable and familiar ways, but in the renunciation of self, wealth, place and relationships.  The service of The Way and the initiatives of other new movements and charisms are wonderful examples of the ‘freshness and fragrance of the Gospel’ in the words of Pope Francis. We are the recipients of this outpouring of blessings from God who is never outdone in generosity.  May our hearts be filled with gratitude!”

Nicholas Beckman, Martha and Bill Beckman’s son and one of six wonderful young men assigned to our local Church from The Way, is among the seminarians coming to the new Redemptoris Mater missionary seminary being founded this year in Philadelphia at my request.

Redemptoris Mater missionary seminary – similar to a “house of formation” as Americans usually understand the term – will not replace or compete with St. Charles Borromeo Seminary.  Redemptoris Mater will have its own identity and rector.  But St. Charles will continue to provide the academic formation for all our seminarians.  And all our seminarians – both those who enter St. Charles under the traditional protocols, and those who are educated by St. Charles through Redemptoris Mater missionary seminary – will be equally “our” seminarians.  Men of The Way ordained for Philadelphia will be fully and permanently Philadelphia priests, with the one footnote that a certain number will be released, as circumstances allow, for missionary service for a limited time in The Way, overseas or here in North America.

In the weeks ahead, I’ll provide more details on the new Redemptoris Mater missionary seminary, and very positive developments at St. Charles Borromeo Seminary itself.  In the meanwhile, as we seek to renew the tremendous legacy of Catholic life in Philadelphia, I ask you to pray for the six young men who have come from afar and committed their lives to serving the Church here in the Philadelphia region.

PREVIOUS: Pope Francis and ‘The Interview’

NEXT: Living the Gospel of Life