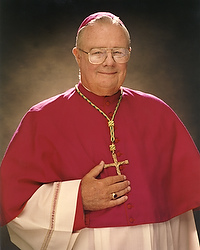 His funeral Mass was to be celebrated at the Cathedral of St. John the Baptist in Charleston Dec. 4, followed by the rite of committal.

A memorial service was planned for Dec. 18 at 6:30 p.m. in Christ Our King Church in Mount Pleasant, where the late bishop ministered in retirement.

Charleston Bishop Robert E. Guglielmone recalled him with warmth, saying he was grateful for the genuine welcome and support Bishop Thompson offered him when he first took the helm of the diocese five years ago.

“We in the Diocese of Charleston have lost a good friend, a holy priest and faithful bishop,” he said. “Bishop David Thompson was an inspiration, not only in his active life as priest and bishop, but also in his 16 years of retirement.”

After he retired at age 76, Bishop Thompson remained an avid golfer and continued to serve the diocese as called upon. He celebrated confirmations, served in weekend ministry at Christ Our King Church, served as a judge on the diocesan Office of Tribunal, offered days of recollection, hosted retreats, and gave talks to religious groups.

“I will miss him as a brother bishop and a friend. May he rest in peace,” Bishop Guglielmone said.

During his nine years as shepherd of the statewide diocese, Bishop Thompson traveled thousands of miles to visit every parish and mission. He was known for his stance against the Confederate flag over the Statehouse and gambling, and strongly upholding Catholic teaching against abortion and the death penalty.

His 1992 pastoral letter, “Our Heritage — Our Hope,” convoked a synod, the first in the Charleston Diocese since 1956. Work on the official gathering of laity and clergy began in 1990, and the process culminated with a third session and celebratory closing in January 1995.

The bishop was awarded the Tree of Life Award, which is the Jewish National Fund’s highest honor, for his efforts on behalf of interfaith harmony. He also received the Order of the Palmetto award, considered the highest civilian honor in South Carolina.

David Bernard Thompson was born May 29, 1923, in Philadelphia. After graduating from West Catholic High School in 1941, he went on to earn a bachelor’s degree and a master’s in history at St. Charles Borromeo Seminary in Wynnewood, Pa.

He was ordained a priest of the Philadelphia Archdiocese May 27, 1950. He began postgraduate studies in September of that year at The Catholic University of America in Washington, where he earned a licentiate in canon law.

In September 1952, then-Father Thompson began a five-year stint as a teacher at St. Thomas More High School in Philadelphia. He also served as a guidance counselor. During that time, he took courses at Villanova University and served as an advocate on the Archdiocesan Tribunal.

Responding to students’ requests for a social outlet similar to “American Bandstand,” the priest started Notre Dame “Bandstand” in 1957. He hired Gene Kaye, a disc jockey at an Allentown, Pa., radio station, who helped propel the record hop to national prominence and dubbed the priest “Father Bandstand.”

On Jan. 28, 1961, Blessed John XXIII created the Diocese of Allentown, and founding Bishop Joseph McShea named Father Thompson the diocese’s first chancellor, then its first secretary to the diocesan consultors and first assistant judicial vicar to the tribunal. In early 1965, he became the first chairman of the diocesan Committee on Ecumenism.

In October 1966, Bishop McShea appointed the priest, named a monsignor in 1963, his vicar general. He was reappointed in 1983 by Bishop Thomas J. Welsh and served a total of 22 years as vicar general.

In February 1967, he became pastor of Immaculate Conception Church. Two months later, he was named promoter of a diocesan synod convoked by Bishop McShea. From 1975-1989, he was pastor of the Cathedral of St. Catharine of Siena in Allentown.

He is survived by a twin brother, Msgr. Edward J. Thompson, who served in what was then the Diocese of Reno-Las Vegas and is now retired in Florida; and a sister, Elizabeth Jane, married to John H. Hutton of Drexel Hill, Pa., and their four grown children.

NEXT: Pope expected to proclaim sainthood of Jesuit companion of St. Ignatius