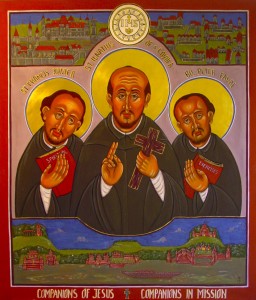 St. Francis Xavier, St. Ignatius of Loyola and Blessed Peter Faber are shown in an icon. Pope Francis is expected to issue a decree declaring one of his favorite Jesuits, Blessed Peter Faber, a saint. (CNS photo/courtesy of Jesuit General Curia)

VATICAN CITY (CNS) — Pope Francis is expected to issue a decree declaring one of his favorite Jesuits, Blessed Peter Faber, a saint.

The decree is likely to take the form of what the Vatican terms an “equivalent canonization,” in which the pope inserts the name of the new saint in the universal calendar of saints without verifying a miracle performed through his intercession and without holding a formal canonization ceremony.

Jesuit Father Marc Lindeijer, vice postulator or promoter of Jesuit sainthood causes, told Catholic News Service Nov. 27 that “more or less right after his election” in March, Pope Francis asked that the process be started for the canonization of Blessed Faber, who with St. Ignatius of Loyola and St. Francis Xavier, was a founding member of the Society of Jesus.

While according to church law Pope Francis could have signed a decree immediately, Father Lindeijer said the pope asked that the cause “be studied and evaluated on its merits.”

The “equivalent canonizations” — used most recently for St. Angela of Foligno and St. Hildegard of Bingen — recognize the candidates’ widespread fame of holiness and veneration by Catholic faithful sustained over centuries.

Cardinal members of the Congregation for Saints’ Causes are scheduled to meet in mid-December to vote on whether or not to recommend the pope declares him a saint by decree.

Father Lindeijer said a panel of historians and a group of theologians convoked by the congregation already voted unanimously in favor of the canonization, and he said he would be surprised if the cardinals did not follow suit.

For modern Jesuits, he said, the canonization would be another step forward in recognizing that the Society of Jesus was founded by a group of companions and not only by St. Ignatius.

“Many feel there has been too much focus on one man, one founder, as if Ignatius embodied the whole charism” of the Jesuits, Father Lindeijer said.

Faber, who was born in 1506 in what is now France, shared lodgings with Ignatius and Francis Xavier at the College of St. Barbara at the University of Paris. Faber actually was the first of the Jesuits to be ordained a priest and he celebrated the Mass in 1534 during which St. Ignatius and the others took their vows of poverty, chastity and obedience.

Jesuit Father Antonio Spadaro, editor of La Civilta Cattolica, who conducted the interview with Pope Francis published in Jesuit periodicals in September, had asked Pope Francis about his favorite Jesuits.

Pope Francis began “by mentioning Ignatius Loyola and Francis Xavier, but then focuses on a figure that other Jesuits certainly know, but who is of course not as well known to the general public: Peter Faber (1506-46),” Father Spadaro wrote.

Asked what he admired about Faber, the pope replied, his “dialogue with all, even the most remote and even with his opponents; his simple piety, a certain naivet, perhaps, his being available straightaway, his careful interior discernment, the fact that he was a man capable of great and strong decisions but also capable of being so gentle and loving.”

NEXT: Black Catholics’ history, heritage given special notice each November