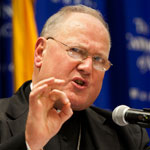 Keeping undocumented immigrants “as a permanent underclass of workers who are unable to assert their rights or enjoy the fruits of their labor is a stain on the soul of the nation,” said the cardinal, who is president of the U.S. Conference of Catholic Bishops.

“As pastors, we witness each day the human consequences of a broken immigration system,” he said. “Families are separated through deportation, migrant workers are exploited in the workplace, and migrants die in the desert.

“In their attempts to respond to these human tragedies, our priests, religious, and social service providers in many cases are unable to help these persons without changes to the law,” the cardinal added.

In early October, immigration advocates gathered in Washington for a rally and march. Faith leaders from 18 traditions prayed for comprehensive reform, which they called “a God issue.” About 200 participants, including at least eight members of Congress, were arrested in an act of civil disobedience to draw Boehner’s attention to the issue and pressure him to put a comprehensive reform bill to a vote in the House.

“As a moral matter … our nation cannot continue to receive the benefits of the work and contributions of undocumented immigrants without extending to them the protection of the law,” said New York Cardinal Timothy Dolan, president of the U.S. Conference of Catholic Bishops.

The Senate passed such a bill in June, but Boehner has resisted calls to bring it to a vote. An effort by a bipartisan group of House members to draft a bill for that body fell apart and a comprehensive bill similar to the Senate version has been introduced by a group of House Democrats but no votes have been scheduled.

In his letter, Cardinal Dolan reiterated what the Catholic bishops have long called for in a reform measure, including creating “a fair and achievable path” to citizenship for the country’s 11 million undocumented immigrants; permitting future migrant workers to enter the U.S. safely, legally “and with appropriate protections”; restoring basic due process protections to immigrants; and enhancing protections for refugees and asylum-seekers.

He called for expediting the reunification of families, but emphasized the policy must be “based on marriage as the union of one man and one woman.” Some lawmakers want any immigration reform bill measure to allow citizens to sponsor foreign same-sex spouses for permanent residency in the U.S., just as citizens with opposite-sex foreign spouses can now.

Cardinal Dolan said any reform bill should address the root causes of migration, such “as poverty and persecution.”

Catholic teaching supports “the right of sovereign nations to protect their borders,” he added.

“Immigration reform would protect that right and restore the rule of law while upholding the human rights and dignity of the person,” he continued. “As a moral matter, however, our nation cannot continue to receive the benefits of the work and contributions of undocumented immigrants without extending to them the protection of the law.”

President Barack Obama has made immigration reform one of his top priorities for the rest of the year. On Nov. 5, he discussed the issue with business leaders, many of whom have joined with labor, faith, high-tech and agriculture leaders is pressing for reform.