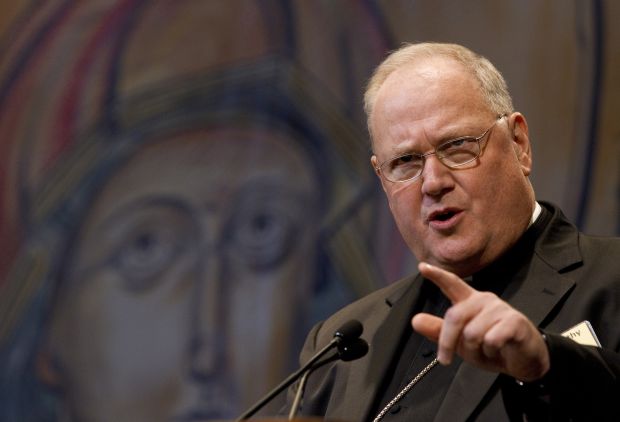 BALTIMORE (CNS) — New York Cardinal Timothy M. Dolan called upon his brother bishops to champion the cause of people around the world being persecuted because of their faith even as the bishops continue to prevent what he described as infringements upon religious practice in the United States.

In his final address as president of the U.S. Conference of Catholic Bishops at the opening of their fall general assembly Nov. 11 in Baltimore, Cardinal Dolan outlined a series of steps the bishops can take to protect religious freedom around the world.

Calling actions to protect religious freedom “a central social and political concern of our time,” Cardinal Dolan urged the bishops to make the protection of religious liberty around the world a priority in their work.

“We as bishops, as shepherds of one of the most richly blessed communities of faith on the planet, as pastors who have spoken with enthusiastic unity in defense of our own religious freedom, must become advocates and champions for these Christians whose lives literally hang in the balance, as we dare not allow our laudable battles over religious freedom at home to obscure the actual violence being inflicted on Christians elsewhere,” the cardinal said.

Citing recent incidents of attacks on Christians during Syria’s civil war and in Egypt, India, Nigeria and the semiautonomous island of Zanzibar off the coast of Tanzania, the USCCB leader encouraged intercessions for persecuted people, comparing the action to “prayers for the conversion of Russia” in the mid-20th century.

Muslims, Jews and Buddhists in some part of the world also are facing persecution, but not on the same scale as Christians, he added.

“We are living in what must be recognized as, in the words of Blessed John Paul II, ‘as a new age or martyrs,'” Cardinal Dolan said, noting that as many as 1 million Christians have been killed in the first 13 years of the 21st century because of their faith.

The cardinal suggested that bishops can create awareness of the “great suffering of our brothers and sisters with all the means at our disposal” including columns in diocesan newspaper, blogs, speeches and pastoral letters. He said bishops can ask parish priests to preach on religious persecution and “to stimulate study sessions or activist groups in their parishes” and encourage diocesan newspaper to report on “today’s new martyrs.”

Just as importantly, the cardinal explained as the bishops began applauding, is contacting political leaders to urge them to make the protection of “at-risk Christians a foreign policy priority.”

“Our good experience defending religious freedom here at home shows that, when we turn our minds to an issue, we can put it on the map,” Cardinal Dolan said. “It’s time to harness that energy for our fellow members of the household of faith hounded for their beliefs around the world.”

Cardinal Dolan cited the words of Pope Francis, who in a Sept. 25 general audience invited the world to an examination of conscience to the plight of Christians around the world. The pope at the time asked people to ask themselves if they were indifferent to the suffering of Christians and if prayers were offered for them.

“I am convinced that we have to answer those questions from Pope Francis not merely as individual believers, but collectively as a body of bishop,” Cardinal Dolan said.

NEXT: Catholics described as eager to give input as church prepares for synod