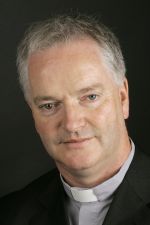 Irish Msgr. Paul Tighe is secretary of the Pontifical Council for Social Communications. He is pictured in a 2008 file photo. (CNS photo/Bob Roller)

BRAINTREE, Mass. (CNS) — The Internet will host the parish community of the future, according to Msgr. Paul Tighe, secretary of the Pontifical Council for Social Communications.

“Social media is redefining how we understand local community,” he said. “The digital parish will be where people cluster around shared interests and shared ideas.”

Msgr. Tighe made the comments in a keynote address at the sixth annual Catholic New Media Conference held at the Archdiocese of Boston’s Pastoral Center in Braintree. He stressed the importance of Catholics bringing their faith to the digital arena, a place where people are spending a greater portion of their lives.

According to data compiled by eMarketer in August, the average American adult spends more than five hours online every day, and a 2011 survey of Brits found that one in four spend more time on the Internet than they do asleep.

Msgr. Tighe said that people are going online to connect with others.

“I am extremely hopeful because look what people are doing in social media — relationships and friendships, searching for information, sharing ideas, following. They are all fundamental human realities,” he said in his Oct. 19 address.

The Catholic Church has a duty to evangelize people who can be found on the digital continent. As the church sent missionaries to Africa and the Americas, she must also engage people on the Internet. The church needs to make space for the soul online, he said.

Even the pope tweets. Pope Benedict XVI began using Twitter to send out 140-character messages of faith, and Pope Francis has continued that practice. Pope Francis used social media as the main means for inviting people all over the world to pray for peace in Syria.

Msgr. Tighe said that Catholics should keep a positive tone online. He urged that correcting others online must always be done for the sake of the other, rather than the desire to win an argument. The church should never let negative commenters define her message. “Don’t go chasing after every criticism,” he said.

After Msgr. Tighe’s address, conference participants could choose to attend various breakout sessions throughout the day.

Pope Francis emphasizes the “big picture” — that Christ came to save us. When people truly understand this, conversion will follow, he added.

Father Landry said that Pope Francis has had an “enormous impact” on his own ministry, providing hope to Catholics in his diocese, with many of the feeling a renewed pride in being Catholic.

Another breakout session featured Angela Sealana, who works for a Catholic evangelization apostolate and has a blog, Inspired Angela, at http://inspiredangela.wordpress.com. Like Msgr. Tighe, she encouraged Catholics to be positive influences online.

To be effective new media missionaries, they need to be joyful, humble and merciful. The strength of their prayer life will affect their online projects, she added.

“It may not seem to have a direct correlation to how many Facebook ‘likes’ you have, but it does,” she said.

Participants seemed energized by the conference. Many of them spent a good portion of the day on their mobile devices. Some were updating their social media accounts with news of the conference.

Stephanie Kelliker, a youth minister and communications coordinator from Lexington, told The Anchor, Fall River’s diocese newspaper, that she was there because her parish collaborative is looking for ways to engage parishioners who are registered but not actively participating in parish activities.

She said that at the conference she learned new media provides “endless possibilities.”

Williams is a correspondent for The Anchor, newspaper of the Diocese of Fall River, Mass.