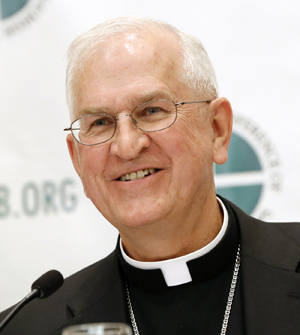 BALTIMORE (CNS) — The newly elected president of the U.S. Conference of Catholic Bishops has been a bishop for nearly 14 years, but it’s as priest, family member and social worker that he describes himself.

By way of introduction to American Catholics, Archbishop Joseph E. Kurtz of Louisville, Ky., talked about his upbringing in the coal regions of northeastern Pennsylvania, of spending most of his priesthood as a social worker, and of caring for his older brother, George, who had Down syndrome, for 12 years after their mother died. George Kurtz died in 2002.

The archbishop is also a graduate of St. Charles Borromeo Seminary in Wynnewood and was ordained a priest of the Allentown Diocese in 1972.

He takes obvious pride in his identity as both a coal-town native and a transplanted southerner, after serving as bishop of Knoxville, Tenn., from 1999 to 2007, when he became archbishop of Louisville.

Archbishop Kurtz, 67, was elected by his fellow bishops to serve a three-year term as president of the conference, succeeding New York Cardinal Timothy M. Dolan in the post. He has been vice president of the USCCB for the past three years and was elected amid a slate of 10 bishops with a 125-vote win on the first ballot Nov. 12.

In an interview with Catholic News Service shortly after his election, Archbishop Kurtz spoke of seeing the example of Pope Francis as a model for outreach, listening and collegiality. “He’s asking us to go beyond what we’ve been doing,” he said. “If it was a car, I guess we’re moving in to high gear.”

But he suggested there might be a thread to consider in his intervention in October 2012 at the world Synod of Bishops on the new evangelization.

There, he used his allotted five minutes to focus on parish observances, particularly the Rite for the Blessing of a Child in the Womb.

(Watch a video on Archbishop Kurtz below.)

He told CNS Nov. 12 that he sees the rite as a way of “reaching out to people on the margins, especially a woman who is pregnant, especially if they’re distant from Christ, distant from the church.”

Picking up on themes of Pope Francis, Archbishop Kurtz said “we need to reach out, not, as the Holy Father said so well, (first) with rules and regulations — which are appropriate if you’re going to present a child for baptism — but it should not be the first step. We should be reaching out as the first step.”

That rite of blessing has resonated with people in the Archdiocese of Louisville, he said, as became apparent in recent listening sessions held there. He said the rite tangibly helps affirm the central role of children in society, “not as property, not as a possession, but as a true gift of creation.”

He’d like to see that approach used more broadly, he said, perhaps with other segments of society that are marginalized.

While his term as vice president has helped him become familiar with the job he’ll now add to his archdiocesan role, Archbishop Kurtz said that in some ways it’s impossible to be prepared for what God calls one to do.

“Do we ever get the gist of what it means to serve Christ?” he observed.

Being an officer of the USCCB is a ministry of service and unity, he said — service to the U.S. bishops and the people of God, and unity with those groups, with the pope and with episcopal conferences around the world.

Archbishop Kurtz isn’t likely a familiar name or face to U.S. Catholics outside the dioceses where he’s served, although during his term as USCCB vice president he has had a busy agenda away from his archdiocese.

He also serves on the boards of St. Charles Borromeo Seminary, Leadership Louisville, and on the advisory board for the sainthood cause for Archbishop Fulton Sheen.

Born Aug. 18, 1946, in Mahanoy City, Pa., he was one of four children of the late George and Stella Kurtz. He earned bachelor’s and master’s of divinity degrees from St. Charles Borromeo Seminary in Philadelphia and a master’s degree in social work from Marywood School of Social Work in Scranton, Pa. He was ordained for the Diocese of Allentown, Pa., March 18, 1972.

His 27 years in the Allentown Diocese included positions as associate director and director of the diocesan social services agencies and coordinator of health affairs; as pastor of two parishes, totaling 12 years; and as an instructor at Mary Immaculate and St. Pius X seminaries.

He also was on the boards of the Pennsylvania Catholic Conference and the Catholic Social Agency while in Allentown. In Knoxville, he was a member of the Association of Christian Denominational Leaders and Leadership Knoxville.

Archbishop Kurtz still identifies strongly with his roots. “I grew up in a coal town. Family was very important to me. Neighbors were very important. I think we took an interest in our neighbors. That means a lot. I don’t care how big the city is, I still say hello to the person I pass on the street.”

That approach has served him well in making a new home in Tennessee and later Kentucky, he said.

“I think no matter what culture a person comes from, we can learn (about them) from their sense of family, their sense of devotion,” the archbishop said. Citing Pope Francis’s comments about focusing on love and mercy, seeing the dignity of an individual, and accompanying people in their struggles, he said, “I think those words suit me well.”