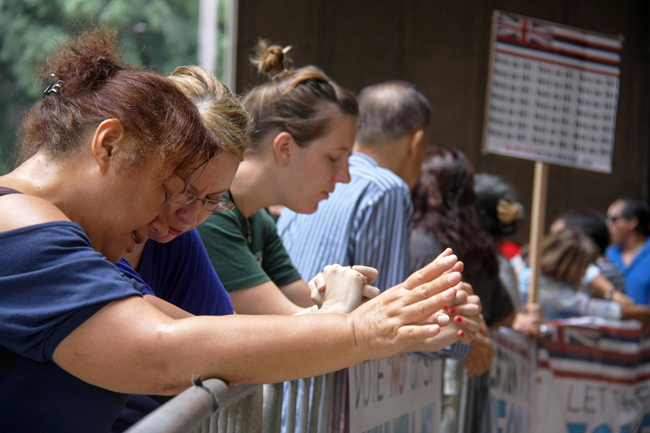 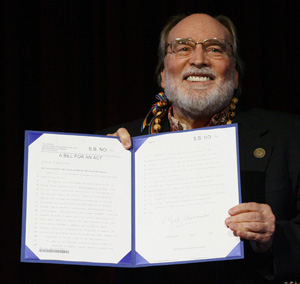 HONOLULU (CNS) — Following a special session of the Hawaii Legislature that for two weeks turned the state Capitol into high-spirited exhibition of populous democracy, Gov. Neil Abercrombie Nov. 13 signed the bill causing all the commotion and made Hawaii the 15th state to legalize same-sex marriage.

Honolulu Bishop Larry Silva, who had vigorously opposed the legislation, called same-sex marriage a “manufactured civil right” that is “symptomatic of a profound misunderstanding of the purpose of human sexuality.”

“It is very sad that many of our state legislators and our governor have confused a manufactured civil right with a true civil right based on the centuries-old respect for marriage as a stable union between one man and one woman established and publicly recognized primarily for the welfare of children,” the bishop said in a Nov. 13 statement.

The bill, S.B. 1, gives married same-sex couples the same benefits and responsibilities as opposite-sex married couples in Hawaii while protecting, to a degree, clergy and religious organizations that oppose same-sex marriage from having to provide services or facilities for same-sex ceremonies.

Couples will be able to get married starting Dec. 2.

In a statement released in Washington, San Francisco Archbishop Salvatore J. Cordileone, chairman of the U.S. bishops’ Subcommittee on the Promotion and Defense of Marriage, called Hawaii’s decision to change “the meaning of marriage” disappointing and said it showed “the need for rebuilding a culture of the family in our country.”

“When referring to the family,” the archbishop said, “Pope Francis put it this way: ‘I think first and foremost of the stable union of man and woman in marriage.’ The very point of marriage having the unique status in the law that it has is to promote the right of children to have a mother and a father.

“Only a married man and woman can provide that. The question we need to ask ourselves is this: How can we honestly justify a law that in principle denies children this right?”

Illinois was poised to become the 15th state to legalize same sex-marriage, as lawmakers passed a final measure there Nov. 5, but Illinois Gov. Pat Quinn has not yet signed it into law.

In Hawaii, in his remarks at the bill’s signing before a gathering of same-sex marriage supporters, Abercrombie acknowledged the religious component of the debate and asserted the bill balanced personal and religious freedoms.

Quoting the state and U.S. constitutions, plus a couple of the Founding Fathers and others, he called the same-sex bill “the epitome of the First Amendment in action.”

He praised lawmakers who, he said, put aside personal beliefs for the public interest.

The state Legislature passed S.B. 1 Nov. 12 with a 19-4 vote of the state Senate. The bill had cleared the Senate Oct. 29 and was amended and passed 30-19 by the state House of Representatives Nov. 8.

Bishop Silva ended his statement on a hopeful note: “We pray that we will be able to restore marriage and family to their true place in God’s plan for humanity.”

He also thanked those who fought unsuccessfully to defeat the bill and called for harmony between opposing factions.

“We pray for all the people of our state, especially for those who supported this bill,” he said. “Though we disagree profoundly, may we live in peace with one another.”

Abercrombie’s call for a special session to legalize same-sex marriage galvanized thousands of people who came to the Capitol to testify and demonstrate, most in opposition to the bill.

Thousands assembled at the Capitol Oct. 28, the opening date of the session, to protest the legislation. More than 5,000 submitted written testimonies, the large majority in opposition to the bill.

More than 1,000 came to the Capitol to deliver their opinions in person, resulting in 55 hours of hearings over five days. The state House spent two days in deliberation before passing the bill.

Those opposing the bill came primarily from evangelical, Mormon and Catholic congregations. Their main message, repeatedly chanted at every gathering, was “Let the people decide.” It was a call to vote to amend the state constitution to define marriage as the union of one man and one woman.

The argument, which the Legislature rejected, was that the same-sex marriage issue was decided 15 years ago by a referendum. In 1998, 69 percent of Hawaii voters passed a constitutional amendment which gave the state Legislature the power “to reserve marriage to opposite-sex couples.”

That referendum came in response to a 1993 Hawaii Supreme Court ruling that stated that the constitutional right to equal protection prevented the state from denying marriage licenses to same-sex couples.

The Hawaii court decision also prompted Congress to pass the Defense of Marriage Act, which for federal purposes limited marriage to a man and a woman. When the U.S. Supreme Court struck down DOMA in June as unconstitutional, Abercrombie pushed for the special session.

The primary voice of the Catholic Church in the public debate belonged to Bishop Silva who, in letters and talks, urged everyone to look at the “big picture.”

He warned of same-sex marriage’s “long-term and profound societal implications” that would influence everything from school textbooks and school dances to child rearing and adolescent sexual development.

Religious freedom would also be “seriously threatened, no matter what safeguards may be built into the bill,” he said. And the rights of parents will be “seriously undermined.”

Bishop Silva said that the “greatest casualties” of same-sex marriage will be children who will be “deprived of being raised in a loving home by a mother and a father who loves them and whose love cooperated with God’s plan in creating them.”

In each of his letters, Bishop Silva emphasized that one can respect the equality of human beings while acknowledging the difference between sexes and the distinctions between same-sex and opposite-sex relationships.

The campaign against same-sex marriage was also waged in full-page newspaper ads, through the mail and over the Internet.

Church coalitions in various forums argued that “the Legislature is going up against the will of the people.”