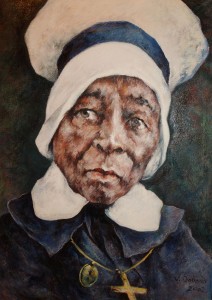 WASHINGTON (CNS) — Black Catholics have made their mark on the Catholic Church in its more than 2,000-year history and the U.S. church’s observance of Black Catholic History Month each November calls to mind those contributions, an official of the U.S. Conference of Catholic Bishops said as the special observance for 2013 was coming to a close.

The month celebrates the lives and contributions of black saints through the centuries and the ministry of leading African-American laypeople and religious, some of whom are candidates for sainthood.

It is important for black Catholics to remember that “many well-known people came before us,” said Donna Toliver Grimes, assistant director of African American affairs for the USCCB’s Secretariat of Cultural Diversity in the Church.

“We have made our mark and have been part of the church and have also enhanced it,” she told Catholic News Service Nov. 22.

The month was chosen, distinct from the U.S. civil observance Black History Month in February, and because two important dates fall in November: St. Augustine of Hippo’s birthday, Nov. 13, and St. Martin de Porres’ feast day, Nov. 3. In the church’s calendar, over course the month also begins with a time of prayer for all saints and souls.

— Toussaint (1766-1853) was a freed Haitian slave who became the city’s most popular hairdresser. He helped finance New York City’s first cathedral, St. Patrick’s Old Cathedral, and he is the only layperson to be buried in the crypt at the “new” St. Patrick’s Cathedral. He was declared venerable in 1997.

— Mother Lange (1784-1882) was a Caribbean-born foundress of Oblate Sisters of Providence in Baltimore in 1929, the oldest U.S. order of women religious of African descent and dedicated to educating and evangelizing African-Americans for the most part. Her sainthood cause was opened in 1991.

— Father Tolton (1854-1897) was a former slave and the first U.S.-born African-American priest and founder of the first black Catholic church in Chicago. His sainthood cause was opened in 2010.

Grimes stressed that these men and women are not just examples of faith for people today but they also “all have interesting stories.”