Victims of powerful Illinois tornado lose everything but faith, charity 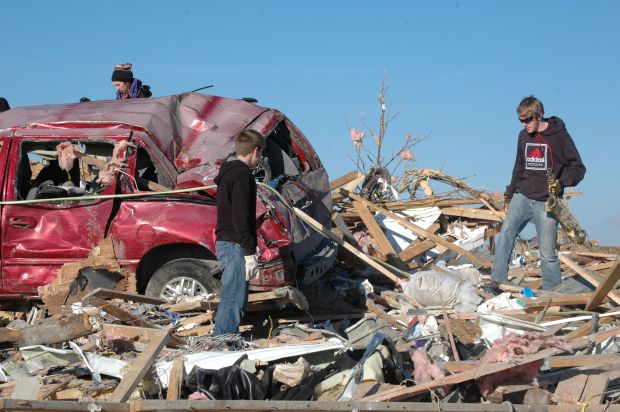 A young man carries a saxophone he found Nov. 18 amid the rubble of one of hundreds of homes destroyed in Washington, Ill., as he and other young people search for belongings after a powerful tornado swept through the community the previous day. (CNS photo/Tom Dermody, The Catholic Post) 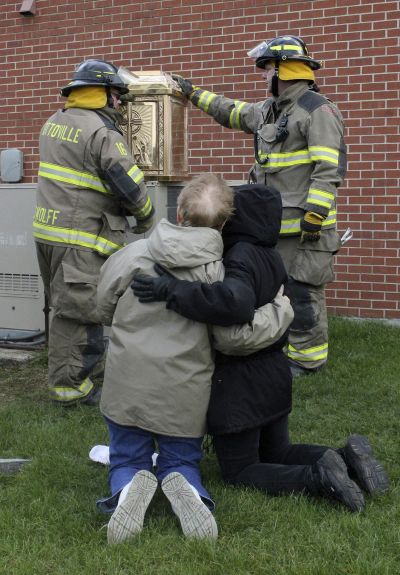 Parishioners kneel before the tabernacle containing the Blessed Sacrament after firefighters pulled it Nov. 18 from the rubble of what was St. Barbara Church in Cloverdale, Ohio. The church and rectory were destroyed Nov. 17 when a powerful tornado swept through the rural community. (CNS photo/Angela Kessler, Catholic Chronicle)

Updated — WASHINGTON, Ill. (CNS) — As Father Stephen Willard was preparing to celebrate the 11 a.m. Sunday Mass at a filled St. Patrick Church in Washington Nov. 17, the most powerful tornado to hit Illinois in November since 1885 was taking aim at neighborhoods on the western edge of this community of 15,000.

With sirens blaring, worshippers were instructed to go to the middle of the church. Father Willard went outside to hurry inside people who were just arriving.

“At one point I looked up and saw the funnel cloud and tornado to the west of us,” said Father Willard.

It was one of many tornadoes that swept through several Midwest states that day, spawned by a strong late-season storm system. At least eight people were killed; six of them lived in Illinois.

The power went out, the storm passed, and Father Willard offered a “quick Mass” that included prayers for anyone who might be affected.

Text messages received by parishioners throughout the church were the first indication that homes had been damaged, but the scope of the tragedy was realized only when Massgoers began trying to make their way home.

Hundreds of homes in Washington were obliterated by the EF4 twister, while a second tornado the same morning caused extensive damage in nearby Pekin, making 75 homes uninhabitable. One person was killed in Washington, and hospitals in the region including OSF St. Francis Medical Center in Peoria treated more than 100 injury victims.

The tornado that hit Washington was reportedly a half-mile wide. It started about two and a half miles southeast of East Peoria, and stayed on the ground for 46.2 miles, according to the National Weather Service, striking East Peoria, Sunnyland and Washington before moving into Woodford County, west of Roanoke toward Minonk. It finally dissipated two miles east of Long Point, in Livingston County.

“It’s amazing how many families, young and older families, have lost everything,” said Father Willard, noting the home of the school’s principal, Doreen Shipman, was among those severely damaged. In all, the homes of 50 St. Patrick parishioners were badly damaged or destroyed as of preliminary reports.

Father Willard and Father Johnathan Steffen, parochial vicar, spoke to The Catholic Post, the newspaper of the Peoria Diocese, the day after the storm from a makeshift relief station established at the parish school. Meals were served and persons in the community were donating clothing and food supplies.

“In spite of all the things people have lost, it’s very clear the people in our parishes haven’t lost their faith, hope and love,” said Father Steffen, who was celebrating Mass at St. Monica Church in East Peoria when the storms hit, knocking out power there as well. “They’ve really poured out their support.”

People throughout the region shared photos and needs via social media. A Facebook page, “Washington IL Tornado Recovery,” was being followed by 171,000 people two days after the storm.

The Washington parish established an account to assist families in need: St. Patrick Church Tornado Relief Fund, which was accepting checks made payable to the fund and sent to: South Side Bank, Attn: Brad Mahony, P.O. Box 328, Washington, IL 61571.

Area Knights of Columbus councils were purchasing gift cards for distribution to needy families, and offers to assist were coming from schools and parishes around the Diocese of Peoria and nation, according to Sharon Weiss, diocesan superintendent of schools and former principal of St. Patrick School, Washington.

“The community camaraderie has been amazing,” said Karolyn Aydt, a St. Patrick parishioner whose husband coaches at the school. The day after the storm, she was distributing food, and tearful hugs, to those coming to the school for relief.

“First they feel shock, then they’re just thankful to be alive,” Aydt said of affected families with whom she has spoken. With block after block reduced to unrecognizable rubble, “you see this in Oklahoma or Joplin (Missouri), but never ever would I think to see it in my hometown,” she said.

The parish priests have heard the same stories.

“People say, ‘It’s just stuff. Thank God we still have our families,'” said Father Willard. “We’re blessed to say our church is still here, as well as our school and rectory.” As of Monday, only minimal property damage to church-owned properties in the Diocese of Peoria had been reported. 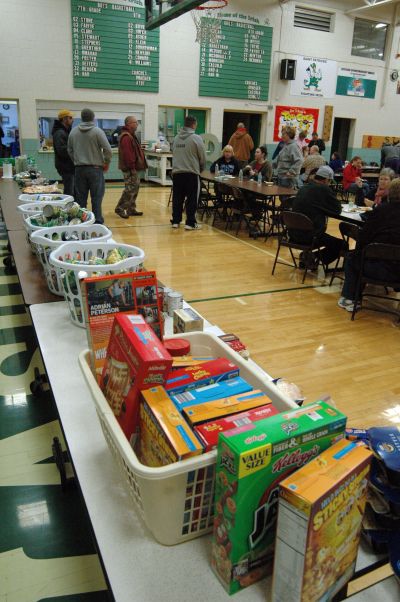 Donated food and clothing items line tables in the gym of St. Patrick School in Washington, Ill., Nov. 18. The parish established the school as a relief site for the hundreds of families affected by tornadoes that struck Washington and surrounding communities Nov. 17. Parish properties did not sustain damage. (CNS photo/Tom Dermody, The Catholic Post)

In Ohio, another tornado associated with the same weather system that hit Illinois destroyed St. Barbara Church in the farming hamlet of Cloverdale, 68 miles southwest of Toledo.

Father Jerry Schetter, pastor, was helping with the cleanup Nov. 19. He had been in the rectory at Immaculate Conception Church in nearby Ottoville, where he also is pastor, when the storm hit.

“I’m just wondering what to do next,” he told Catholic News Service.

The storm swept into the village from the southwest, twisting the roof off the 55-year-old A-frame structure and destroying the adjacent rectory, but leaving the parish hall unscathed, Father Schetter said.

The priest was thankful that no one was in the church when the storm struck. He said people from the strongly Catholic community often visit the church throughout the day to pray.

“Nobody got injured or hurt. The mayor was pro-active and got a lot the people into the town hall. This is a very rural, very poor, low-income community,” Father Schetter said.

After working first to retrieve the tabernacle and Blessed Sacrament from under a brick wall Nov. 18, members of St. Barbara and the surrounding communities began digging and picking through the rubble to find what was salvageable and what was lost.

“Jesus is back home,” Father Schetter told the Catholic Chronicle, newspaper of the Toledo Diocese.

When the tabernacle was retrieved in one piece, the priest transported it to Ottoville’s Immaculate Conception, St. Barbara’s twin parish. The body of Christ was transferred, and the recovered tabernacle — only scratched in the ordeal — was put in a secured storage facility, he said.

“Devastating doesn’t even describe it,” said volunteer Kari Johnson about the status of her former parish church and its rectory. She grew up in St. Barbara Parish and now belongs to a nearby parish.

What she and others saw was a church building that seemed as if it imploded. Roof beams, concrete blocks and bricks lay across pews, stained-glass windows were smashed and bent, the roof and nearly the entire side of the rectory were strewn about. But missals still sat neatly in the pew pockets where they were left after morning Mass Nov. 17.

“What goes through your mind is every event there: first Communion, baptism, I was married there. … My son used to carry baby Jesus up to the Nativity scene,” Johnson said.

While Saturday evening Masses have been discontinued for now and the decision about whether to rebuild the church is long off, Father Schetter was determined to celebrate Sunday Mass, Nov. 24, in St. Barbara’s parish hall.

“It’s part of the healing process,” he said. “And it can only begin with the liturgy.”

NEXT: Vincentian pastor recalled for administering last rites to Kennedy