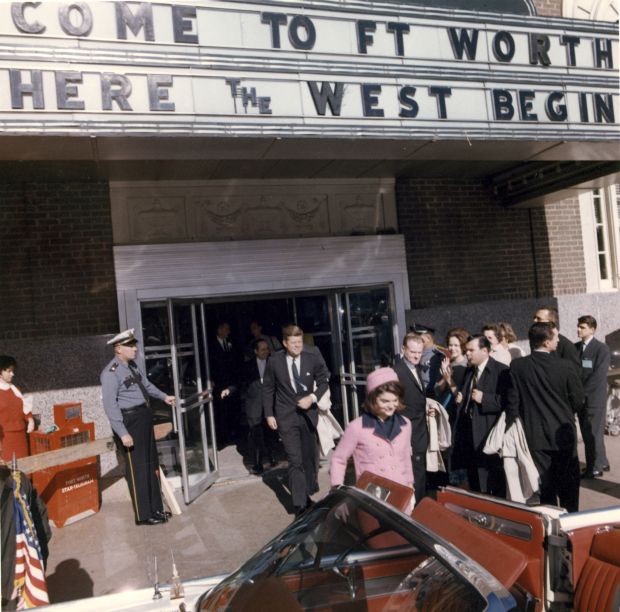 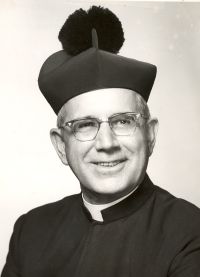 Vincentian Father Oscar Huber, pictured in an undated photo, was the pastor of Holy Trinity Church in Dallas when U.S. President John F. Kennedy was fatally shot Nov. 22, 1963, as his motorcade made its way through downtown Dallas. He administered last rites to Kennedy at Parkland Hospital. (CNS photo/The Texas Catholic)

JEFFERSON CITY, Mo. — The late Vincentian Father Oscar Huber, a native of Perryville in the St. Louis Archdiocese, was a hard-working, dedicated pastor who made many friends throughout his years of faithful ministry.

The priest, who died in 1975, is still remembered for all that. And for one other thing.

A Dallas pastor at the time, he administered last rites to President John F. Kennedy, after an assassin’s bullet Nov. 22, 1963, brought down the nation’s 35th president and he lay mortally wounded at Parkland Hospital.

(Watch a video about the assassination and Father Huber.)

Father Huber also prayed with and comforted first lady Jacqueline Kennedy, but the priest never said much about that time in the years that followed, according to his nephew Father Oscar Lukefahr, also a Vincentian, who was inspired by his uncle’s priesthood to join the same order.

“He was not the kind of person who enjoyed being in the limelight,” Father Lukefahr once told The Catholic Missourian, newspaper of the Jefferson City Diocese.

“If people asked questions about it, he answered cautiously. He didn’t go around saying, ‘I was the one who anointed the president.’ He was simply a priest who did his job, and that was that,” said Father Lukefahr.

He made those comments in an interview with the Catholic paper in 2008, the 45th anniversary of Kennedy’s death. Father Lukefahr was then and still is a regular columnist for The Catholic Missourian.

As the nation marks the 50th anniversary of the Kennedy assassination, Father Huber’s name may not be as familiar as many others who have become part of the public memory of those dark days, but a January 2007 issue of the Southwestern Historical Quarterly recounted how Father Huber, then pastor of Holy Trinity Parish, walked several blocks from his church to see the president’s motorcade.

Believing that the nation’s first Catholic president, who was traveling in an open-topped limousine, had spotted his Roman collar and waved to him, Father Huber returned to his rectory to tell his friends what had happened.

“It was a thrilling moment for me,” he was quoted as saying.

A while later, Vincentian Father James N. Thompson, associate pastor, told Father Huber that the president had been shot. Both immediately left for the hospital, which was three miles away and located with the parish boundaries.

According to an article in the Dec. 1, 1963, issue of The Catholic Missourian, Father Huber was admitted to the emergency room to administer last rites to the president.

Father Huber was quoted by the National Catholic Welfare Conference News Service, predecessor of Catholic News Service, as saying he administered the rites of absolution and extreme unction (now known as anointing of the sick) conditionally, “except Communion, which the president could not receive.”

The priest said the rites were “conditional” because he didn’t know for sure whether the president was alive at the time, but that he did not appear to be breathing.

News stories from 1963 said others in the emergency room, including Mrs. Kennedy, joined the priest as he prayed the Our Father and the Hail Mary.

“She graciously thanked me and asked me to pray for the president. She appeared shocked,” Father Huber told the news service.

Father Lukefahr told The Catholic Missourian that his uncle later told him how impressed he was with the first lady’s strength and courage.

A seminarian in 1963, Father Lukehfahr said that “whenever it came up in conversation — and I respected his desire for privacy by never interrogating him about it — he mostly talked about how he prayed with Jackie, and what a wonderful person she was — very dignified and strong.”

Growing up in Perryville, young Oscar Huber stayed out of school to manage the family farm while his elder brother went away to dental school.

At the age of 28, Oscar entered the Vincentian minor seminary in Perryville. He completed the high school curriculum in two years, moving on to the Vincentian novitiate and college seminary, completing those studies in three years instead of the typical four.

After being ordained in 1931, Father Huber went on to serve at parishes in Missouri, including Kansas City, and San Antonio before moving to the Dallas parish. He was pastor there from 1959 to 1968.

“He was the kind of pastor who could do those kinds of things and do them well,” Father Lukefahr told The Catholic Missourian. “He was a good administrator, and he cared a lot about people. I never heard anyone complain about him.”

After Dallas, Father Huber moved to a parish near St. Louis and spent his last two years back in his hometown, at the Vincentian retirement home in Perryville.

He died in 1975, leaving to his nephew the chalice he had taken to Parkland Hospital.

Nies is editor of The Catholic Missourian, newspaper of the Diocese of Jefferson City, Mo.