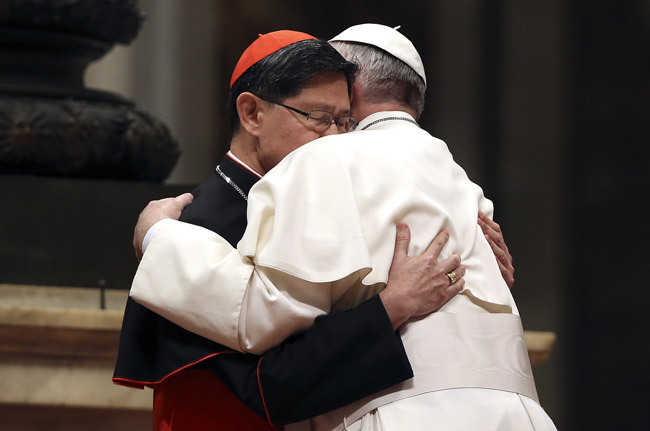 Pope Francis embraces Cardinal Luis Antonio Tagle of Manila before blessing a mosaic of St. Pedro Calungsod during a meeting with the Philippine community at St. Peter's Basilica at the Vatican Nov. 21. (CNS photo/Alessandro Bianchi, Reuters) 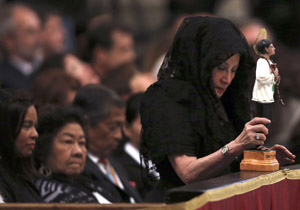 VATICAN CITY (CNS) — In the midst of a disaster, it is natural and perfectly healthy to ask God why, Pope Francis told members of Rome’s Philippine community.

Referring to the death and destruction Super Typhoon Haiyan caused in the central Philippines in early November, Pope Francis said, “Why do these things happen? It can’t be explained. There are many things that we cannot understand.”

The Philippine community had gathered in St. Peter’s Basilica Nov. 21 to formally place a mosaic of St. Pedro Calungsod in the grotto under the church. The ceremony, planned months ago, turned into a prayer service for the deceased and the survivors of the typhoon.

Cardinal Luis Tagle of Manila led the prayers, speaking not only of the sorrow and suffering the mega-storm caused, but also of the faith, love and solidarity evident in its aftermath.

Joining the pilgrims, Pope Francis thanked the cardinal for his “words full of faith, full of pain, full of hope.”

The pope, who asked that a collection for the victims be taken up at his Nov. 24 Mass closing the Year of Faith, said he has followed the situation in the Philippines closely.

The question of why there are natural disasters is something he said he also asks.

But, then, the pope said, he thinks of children who are just starting to understand that there are things they don’t understand. They start asking their parents, “Why? Why? Why?”

Often enough, he said, “the child does not wait for an answer from his father or mother,” but just adds more questions.

In effect, the child is seeking attention from his mother or father more than answers, the pope said. “He needs his parents’ eyes, their hearts, to be focused on him.”

In times of trouble, the pope told the Philippine community, “never tire of asking ‘why’ like a child. That way, you will turn the gaze of our father to your people; you will attract the tenderness of our heavenly father.”