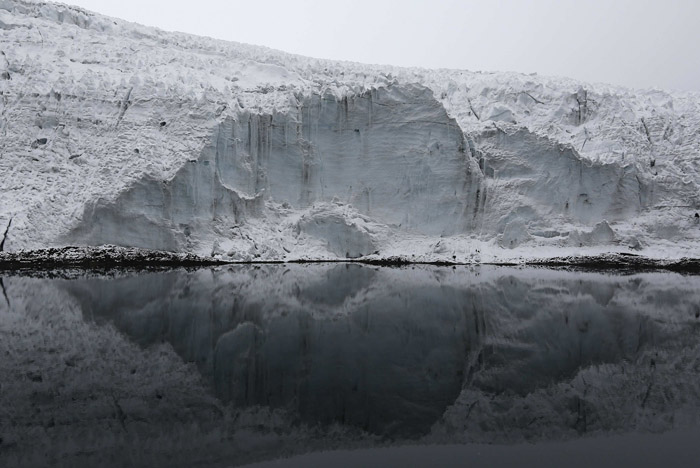 Pictured is the lake formed by melting water from the Pastoruri glacier, as seen from atop the glacier in Huaraz in in late September. In Peru, rising sea levels, advancing diseases and extremes of rain and drought are forecast to bring a six percent drop in gross domestic product by 2030. (CNS photo/Mariana Bazo, Reuters)

WARSAW, Poland (CNS) — When representatives of Catholic development organizations arrived in Warsaw to lobby for action at an intergovernmental conference on climate change, many also urged greater involvement by their own church.

But Christians worldwide are already at the forefront in combating climate-change damage, which is being felt by many local church communities.

In India, widely considered one of the world’s most vulnerable countries, the church’s Caritas charity runs projects promoting agricultural and maritime regeneration, as well as new livelihoods in the face of rising sea levels, temperature changes and extreme weather.

Caritas is active in poor states such as Orissa and Madhya Pradesh, where tribal Catholic communities are affected, and has persuaded 3,600 farmers nationwide to sign up for initiatives to improve soil productivity and crop nutrients.

“Although there’s plenty of land here, it’s often dried up because of declining water irrigation, forcing people to migrate,” Father Frederick D’Souza, Caritas India’s executive director, explained during the Nov. 11-22 Conference of Parties of the U.N Framework Convention on Climate Change in the Polish capital.

“As the climate pollution increases, people will die,” said Orthodox Archbishop Seraphim of Zimbabwe and Angola. “We need our congregations and communities to show spiritual solidarity with victims of climate change, by promoting a sense of the common good over narrow national interests.”

“In the past, certain industries created a false myth that chemical fertilizers always produced bumper crops, whereas we now know they also inflict harm. Catholic parishes and agencies like ours are creating hope by finding possibilities of adjustment and adaptation,” he said.

In French-speaking Niger, whose 17 million mostly Muslim inhabitants are spread over a vast area of 490,000 square miles, climate change has taken its toll through erosion, desertification and the degradation of eco-systems, especially in the eastern regions of Diffa and Zinder.

There, too, church groups are promoting regeneration and a move away from carbon-based resources.

An Islamist revolt in neighboring Mali has risked ecological damage in some parts of Niger, but the minority Catholic Church has been doing its best to help, said Dissarama Sabine Attama, a climate justice adviser to the Symposium of Episcopal Conferences of Africa and Madagascar.

“Virtually all beneficiaries of our work are Muslims — it’s through development actions rather than sermons that our church gets its message across,” Attama told Catholic News Service Nov. 20.

“We hope the voice of small communities like ours will be heard. But we also need the whole universal church to speak out about problems we all now face.”

Orthodox Archbishop Seraphim of Zimbabwe and Angola said his own church, present in Africa since the first century, feels a “deep responsibility” for current climate-related problems.

“As the climate pollution increases, people will die,” he told Catholic News Service Nov. 21. “We need our congregations and communities to show spiritual solidarity with victims of climate change, by promoting a sense of the common good over narrow national interests.”

In Peru, rising sea levels, advancing diseases and extremes of rain and drought are forecast to cause a 6 percent drop in gross domestic product by 2030.

With terrain ranging from rain forest to high-mountain plains to coastal desert, Peru is one of the world’s most biologically diverse countries. Although it hosts 71 percent of all tropical glaciers, these are disappearing quickly, a development that will disrupt water supplies to Lima, a city of 9 million.

In Peru, Catholic groups have promoted mitigation and adaptation strategies, as well as education and awareness on climate change. However, church leaders have faced problems from powerful mining, oil and forestry companies, which have government and police links.

Fabian Simeon, an investigator with Forum Solidaridad Peru and prominent member of the country’s Civic Front movement on climate change, thinks the Catholic Church should do more to offer protection to those with the courage and determination to take a stand.

“We’re running out of time,” said Simeon, whose country will host the U.N. Conference of Parties in 2014. “Although some priests and bishops are helping struggle for climate justice, their work faces strong resistance and often places them in danger.”

All four campaigners attended the Warsaw conference, where delegations from more than 190 governments sought to lay the groundwork for a new deal on global emissions by 2015.

Outlining his hopes, Father D’Souza said he believed championing “climate justice” should be viewed as a new expression of the Catholic Church’s option for the poor and gain new impetus from the pope’s advocacy of “modest lifestyles.”

“Churches must present a compassionate face to the world, showing how the poor are being further marginalized by climate change,” the Caritas India director said. “The Bible tells us we’re stewards of the resources God has given us and must not allow them to be expropriated and misused.”