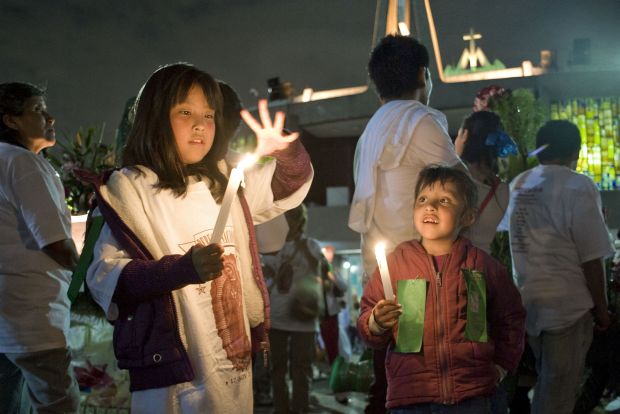 Two children, who are part of a pilgrimage of merchants from Mexico City, play with candles before entering the Basilica of Our Lady of Guadalupe in Mexico City Nov.17. Bishops and church leaders from the Americas gathered Nov. 16-19 at the basilica to discuss the new evangelization in the Americas. (CNS photo/David Maung) 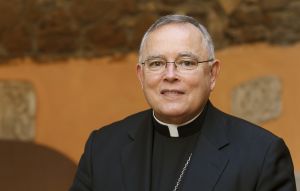 “We need to see and respond to the world as it really is,” Archbishop Charles J. Chaput of Philadelphia said in address titled, “The New Evangelization: Responsibilities and Challenges for the American Continent.”
“We harm our people and deceive ourselves if we let ourselves become complacent, if we misread the shape of the world now emerging around us,” he said.

MEXICO CITY (CNS) — Archbishop Terrence Prendergast of Ottawa, Ontario, recalled once having a parish that needed a new furnace and was considering hiring a youth pastor. The parishioners raised $90,000 in three weeks for the furnace, but failed to find funds for the youth pastor, figuring there were few young people to serve.

Archbishop Prendergast cited the story as an example of “the maintenance model of the church versus a missionary model of the church.” It’s a model that has been deployed by too many dioceses in the United States and Canada and one that some senior clergy recognize as outdated and doing nothing to put people in church pews or contribute to parish life — much less increasing the kingdom of God.

Pope Francis wants that to change and has called on Catholics to adopt a more audacious, missionary mindset.

But several U.S. and Canadian church leaders at a Mexico City conference on the new evangelization said that means a new mindset in countries where people are becoming cultural Catholics or “consumers of religion” and fail to make mission a priority.

“Our job in parishes and dioceses is not just to take care of the people we’ve got, but to welcome back those who have left and to invite new ones,” New York Cardinal Timothy M. Dolan told Catholic News Service.

“If you want to see a model where the faith is nurtured, where people are fed, American parishes get an A+,” Cardinal Dolan said. “If you want to look at a parish, going out, getting new people, bringing them in, reviving the faith of people whose faith is lethargic, then we probably get a C.”

The cardinal’s observations reflect those of Pope Francis, who previously told his priests to get out of their parishes and take the Gospel to the most marginalized members of their communities. The pope also admonished them to reject a “functional” approach, saying it would leave “no room for mystery” and reduce the church to little more than a nongovernmental organization.

“We need, and Pope Francis has reminded us of this … to look at our institutions (such as parishes and dioceses) not as businesses, but as homes,” Cardinal Dolan said. “They’re missionary endeavors, and they provide a spiritual home.”

The U.S and Canadian church leaders said carrying out mission work closer to home is nothing new. Archbishop Joseph E. Kurtz of Louisville, Ky., president of the U.S. Conference of Catholic Bishops, recalled reaching out to those whose faith was tepid or had fallen away from the church.

The Second Vatican Council called for mission, and it was addressed in Blessed John Paul’s 1999 apostolic exhortation, “Ecclesia in America.” But missions sometimes lacked any sort of urgency and, often, a plan of action.

“The church has never tired of reaching out, to call people to conversion. But I’m not sure that we’ve ever done it in such a systematic way,” he said. “We’re beginning with the call for our own personal conversion so, in that sense, maybe there’s perhaps a new aspect in announcing the good news.”

The conference on the “new evangelization,” held Nov. 16-19 at the Basilica of Our Lady of Guadalupe in Mexico City, attempted to identify both the challenges and church actions, which often requires an uncomfortable recognition of reality.

“We need to see and respond to the world as it really is,” Archbishop Charles J. Chaput of Philadelphia said in address titled, “The New Evangelization: Responsibilities and Challenges for the American Continent.”

“We harm our people and deceive ourselves if we let ourselves become complacent, if we misread the shape of the world now emerging around us,” he said.

The shape emerging in Canada has been discouraging at times for Archbishop Prendergast, who said he sees too many people attending church services in times of need, but not embracing church life.

“People are conflicted: They don’t want to go to church, but they want it to be open, in case they need it. In effect, they’re consumers of religion,” said Archbishop Prendergast, a Jesuit, like Pope Francis.

Another reality the archbishop recognizes is that the concept of bearing witness is foreign to many Catholics and seen as something exclusive to evangelicals.

“We Catholics need to learn from that, but we need to put it in our own way,” the archbishop added. “We need to have this idea that was in the ‘Ecclesia in America’ document: an encounter with Christ, communion and solidarity.”

Some say the new evangelization requires a change of style, not church principles.

“The church wins members, not through proselytism, but through attraction. The personality of Jesus is what attracts,” said Archbishop Thomas G. Wenski of Miami.

“It starts with a relationship … then comes the cross,” he added. “Sometimes we put the cross first. Someone comes to the church and we say, ‘Can I see your envelopes?’ … We put demands on people first. The demands can be placed … but only in the context of that first relationship.”

The bishops acknowledge Pope Francis is helping with the new evangelization, causing people to take another look at Catholic Church.

“He really has captured the imagination of people,” said Archbishop Kurtz, who says he is often approached in airports with questions about Pope Francis and has heard six confessions while waiting for planes.

“Obviously he’s spoken about seeing the person first, accompanying the person, warming hearts, healing wounds; these are things that strike a chord in all of us,” he said.