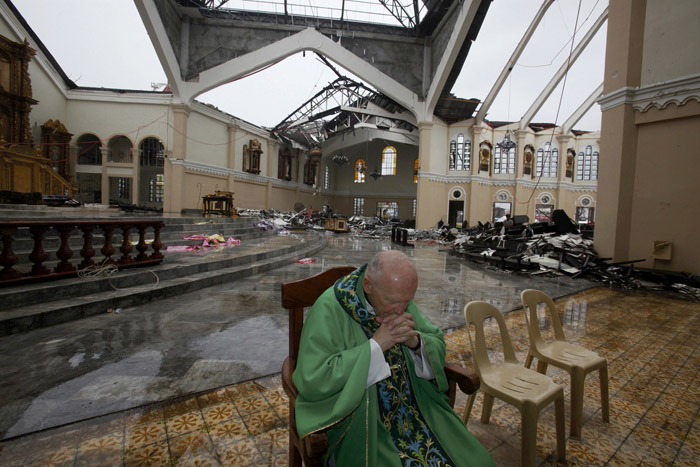 Cardinal Theodore E. McCarrick, retired archbishop of Washington, prays during a Mass inside the partially destroyed Cathedral of the Transfiguration of Our Lord in Palo, Philippines, Nov. 17. Cardinal McCarrick celebrated Mass at the heavily damaged cathedral for victims of Typhoon Haiyan, which came ashore Nov. 8 in the Philippines. (CNS photo/Bobby Yip, Reuters)

MANILA, Philippines (CNS) — The grandstand of Villamor Air Base was buzzing with teams of workers trying to help people displaced by the super typhoon that struck the central Philippines 10 days earlier.

Evacuees, fresh off the military planes that took them here, could make free phone calls, register for transportation to meet loved ones in Metro Manila, get help to start their lives over and receive some much needed stress-debriefing. That was where some local nuns stepped in.

“She said she would contact our family here,” said Pateros, who is from the town of Palo, just south of Tacloban. “She helped us, she has a cell phone. I don’t have a cell phone now. It got washed out and filled with salt water.”

Pateros was holding her 1-year-old daughter in her arms, giving her juice from a small box. The 29-year-old, her husband, their daughter and 3-year-old son, and her father all survived the typhoon’s howling winds and fast-rising water brought by a massive storm surge that smacked Leyte province.

She said her husband “was drifting in the water. And we clung to the branch of a tree. It was hard with two small children. I was so traumatized. That tidal wave, oh, the water was so strong!”

Pateros, a Catholic, said she also prayed hard that no flying debris like loose corrugated metal roofs would hit her head as she huddled to protect her children.

“When the storm slapped my back, it really hurt,” she said. “I just kept praying that my head would be fine.”

The family was able to stay in a house that was still standing and they had plenty of water, but there was little food. They were able to get some rice from a storehouse but it was wet, so they dried it in the sun.

“It was already starting to smell sour. But we cooked it and ate it instead of dying of hunger,” said Pateros. “We just withstood it as best we could, but the children developed diarrhea.”

The family survived the storm and the hunger, but Pateros said hungry inmates who broke through a wall in the prison started to loot the remaining houses, and they went after the family’s neighbors.

“So we left. We ran away and we just came here,” she said.

Sister Pesongco, president of Assumption College in Makati, said the sisters from various orders are debriefing the survivors like the Pateros family to find out how traumatized they are, what they need and to facilitate finding their relatives in Manila.

She said counselors are particularly concerned for the children, “so that they find a home in the midst of all this because the kids need a certain sense of security … that they know people can welcome them and offer them, not just food, but a home. All these are simple things, but they’re very important.”

“We pray for them, all these people that we don’t even know their names, and reassure them that there is a God,” said Sister Pesongco. “In all the disasters that we go through, it’s the strengthening of their faith that will make them go on, that will make them find meaning in their pains and their sorrows and a hope that really, beyond all this, God is greater. God continues to be a loving God.”

NEXT: Bishops: To respond to pope’s call for mission, parishes need new model