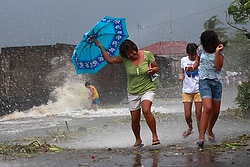 Residents in a town south of Manila flinch from wind and rain brought on by Typhoon Haiyan Nov. 8. The storm, possibly the most powerful ever to hit land, battered the central Philippines, forcing millions of people to flee to safer ground, cutting power lines and blowing apart houses. (CNS photo/Charlie Saceda, Reuters)

The Category 5 strength typhoon hit a part of the country made up of dozens of small islands, which made things very difficult for Catholic aid and other workers who lost touch with their local counterparts Nov. 8.

Joe Curry, Philippines country director of the U.S. bishops’ Catholic Relief Services, was in the central province of Bohol, coordinating efforts related to an Oct. 15 earthquake.

Curry said Bohol itself was not “really hard hit,” but the islands of Leyte and Samar on the easternmost edge of the country were pummeled by Haiyan bearing 195-mph winds.

“We just don’t know much information,” he added.

Curry said it was not just communications that were a challenge; aid workers would have to go island hopping to get to those most in need.

“With Mindanao last year we could drive, this year we can’t,” he said, referring to Typhoon Bopha. With Haiyan, CRS was contending with closed airports and grounded flights as well as a central-Philippines-wide suspension of all transportation by air, sea and land.

He told CNS it was a “very trying time for CRS and the church, I think, just to cope with all these crises, not to mention all the people who are in the middle of it and being affected themselves.”

Ignacio told Catholic News Service Nov. 8 that, for days, in preparation of the storm that was being called the worst to hit the Pacific this season, if not in history, her office was in touch with nine local dioceses in Leyte and other nearby provinces “until we were cut off by the typhoon.”

“Only the Diocese of Maasin showed some signs of life,” she said, referring to an area on the southernmost tip of Leyte. It suffered strong wind damage, but Ignacio said families taking shelter in a local church were reportedly safe and able to return home by the end of the day.

She said she had just seen news footage of a father caught in the storm holding on to his 6-year-old, who had just died.

During a briefing with the National Disaster Risk Reduction and Management Council, a representative of power cooperatives in the multiple-island Visayas said Leyte and Samar, as well as several other provinces, were completely in the dark. Others had partial power, and restoring electricity would be a challenge with major roads blocked by fallen trees.

National Telecommunications Commission Director Edgardo Cabarios told the council three of the country’s major cell service providers were dealing with poor to nonexistent reception and cell towers that were not communicating with each other properly.

Cabarios said even regional government officials were having a hard time getting in touch with their national counterparts in Manila.

“They are coordinating with private civic radio groups in order to communicate with us here about Typhoon Yolanda (the local name of the storm),” said Cabarios.

As early as Nov. 5, the government started a major push to get people out of their homes and into reinforced shelters. Emergency workers prepositioned relief goods in remote areas and had farmers harvest crops and secure livestock, while also ordering hospitals and other offices to reinforce rooftops. The effort culminated with President Benigno Aquino’s national address imploring citizens to follow the order.

More than a million people heeded the call.

“I have seen how it was in the Bopha typhoon,” Ignacio said. “I just don’t want to speculate anything now because it might be quite depressing.”

But she was looking to “one good thing about (Haiyan), if I could consider that”: It was traveling across the country at four times the speed of a typical typhoon, which meant it would be exiting more quickly. It was expected to leave the Philippines Nov. 9 and head toward Vietnam.

NEXT: At Manila air base, distraught family members hope for plane to Leyte