At Manila air base, distraught family members hope for plane to Leyte 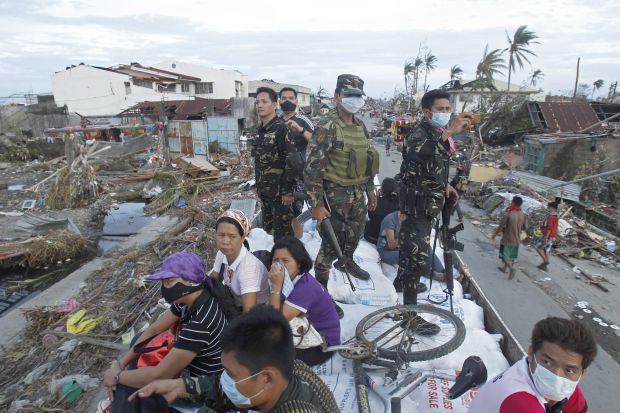 Soldiers and residents look at the devastation of the town from a military aid supplies distribution truck after the Super Typhoon Haiyan battered Tacloban, Philippines. (CNS photo/Edgar Su, Reuters)

MANILA, Philippines (CNS) — The back entry to the grandstand at the Villamor Air Base was teeming with people as the noon sun peaked. It was Nov. 11, three days after Super Typhoon Haiyan pounded the central Philippine islands, leaving a path of overwhelming destruction that emergency and relief workers were hard-pressed to penetrate.

Everyone in this group was hoping for a chance to get on one of the C-130 military planes on the airfield that would be heading to Tacloban, in Leyte province, where Haiyan whipped up a 15-foot-high storm surge that scattered bodies in its wake.

Maria Grace Estorico sat on a curb pressing a handkerchief to her eyes.

“I don’t know if my family is still alive or if they’re all dead,” she told Catholic News Service in between sobs. “I’ll be the only one left.”

Estorico lives in Tacloban, with her family, rice farmers. She came to the capital in September so she could apply for better paying work abroad as a domestic helper. She left behind her husband, a teenage daughter, an adult daughter and son-in-law, her grandchildren and her parents.

The last time Estorico spoke with someone from her family was Nov. 5, and she has not been able to reach anyone in her neighborhood to try to get some news.

“Since Saturday I was wondering how I could get there,” said Estorico. “I don’t have any money and I found out about this free flight, so I got here at dawn.” 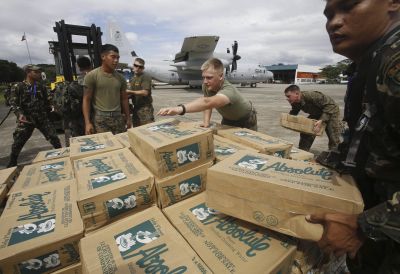 Others, such as Tito Lucinareo, came to the base from a nearby province even before dawn. Since the typhoon struck Nov. 8 he said he had not slept very well. Lucinareo’s 13-year-old daughter and 6-year-old son live with his aunt and other family members in a town 15 miles outside Tacloban.

One of Lucinareo’s nephews was able to get on a C-130 Nov. 10, and he saw that the children survived the storm.

Lucinareo told CNS he was relieved to know they were alive but finding out they were hungry pained him “because even if there’s money to send, it all comes to nothing. There’s nothing to buy there,” said Lucinareo. “Money is meaningless now. It hurts. It hurts.”

Lucinareo, a brother, a cousin and other relatives packed bags filled with food that they planned to take to their hometown on foot because the roads were covered with the debris of ruined houses entangled in downed power lines and splintered trees.

There were reports of looting as people tore through grocery stores and malls in search of food and clean water. The government said it brought in additional military and police personnel to try to manage the situation.

The C-130 planes loaded with relief goods had been making runs between Manila and Tacloban, but the challenges came once they hit the ground in Leyte.

On Nov. 11, the President’s Cabinet Secretary Rene Almendras told reporters the federal government really needed the inside knowledge that local governments had about what villages to go to, how big the populations were in these villages and whether certain routes would be safe for the military and national first responders to pass.

Nelida Palconite was also among those waiting at Villamor Air Base, but she said she thought maybe she would not be able to get on the flight. Barring a spot on the C-130, she made this plea to the international media: “We need food. We need … everything that you could give us. Medicines, water!” 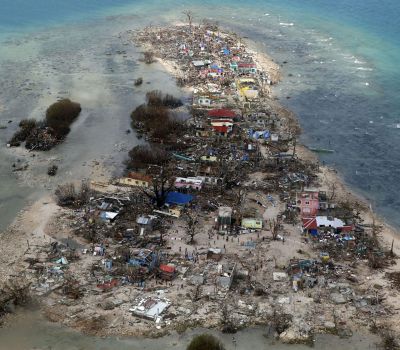 The government and humanitarian agencies, including the U.S. bishops’ Catholic Relief Services and Caritas Philippines, were trying to cope with more than 600,000 displaced people, and calls for aid have been widespread.

Joe Curry, country representative to CRS in the Philippines, said when his staffers reached Leyte by boat, what they described was complete and utter devastation.

He said the shore in Palo is “gone, total devastation.” Palo is the city where U.S. Gen. Douglas McArthur uttered his famous “I shall return” quote in World War II.

Some of those conducting the initial assessments for CRS had also worked after Typhoon Bopha last December. Curry said they noted that while Bopha’s damage was a strip, Haiyan had damaged the entire island.

Curry said he was communicating with his staff intermittently by satellite phone, often by text because they could only charge cell phone batteries with their car.

He also noted that Tacloban has an airport and so had been able to receive aid, but many people outside Tacloban also needed help — aid agencies had not yet reached them.

In the days following Haiyan, Manila Cardinal Luis Antonio Tagle scheduled a second collection for its victims. In a letter, he told priests to reach out not just to parishioners but also to parochial schools, parents groups and lay ministry associations among others.

Cardinal Tagle closed with this reminder, “Through our prayers and effective solidarity, the faith will rise stronger in the midst of ruins. Our Blessed Mother is watching over us. The God who is love is near us.”

The Catholic Bishops’ Conference of the Philippines declared a nationwide nine-day prayer and charity drive from Nov. 11-19 for the victims of Typhoon Yolanda, as it was known in the Philippines, and the Oct. 15 magnitude 7.2 earthquake that hit central Philippines Oct. 15.

Archbishop Jose Palma of Cebu, president of the bishops’ conference, sent a message to all Filipinos, telling them, “No typhoon or flood can diminish the strength of the Filipino soul.”

NEXT: Pope leads prayers, calls for aid for people hit by deadly typhoon