In Philippines, signs of faith among ruins of typhoon 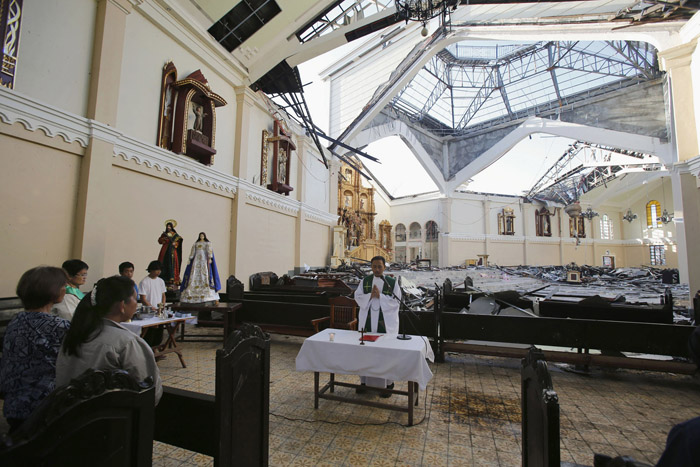 A priest celebrates an early morning Mass Nov. 15 in an undamaged portion of the Metropolitan Cathedral in Palo, Philippines, in the aftermath of Super Typhoon Haiyan. The cathedral is one of many Catholic churches, schools and convents damaged or destroyed in the powerful storm. (CNS photo/Wolfgang Rattay, Reuters)

MANILA, Philippines (CNS) — In the week after Super Typhoon Haiyan cut a path of devastation across the central Philippines, faith remained strong among the hardest hit.

At Villamor Air Base in Manila, Roel Gonzales, 42, of Leyte province smiled while aid workers sang “Happy Birthday” to him Nov. 15.

It was a sweltering late morning with the sun approaching its peak, but everyone was shaded under a covered court. They sat in circles on plastic chairs, eating noodles with the speed of those who had not eaten for days.

In fact, they had not. They were among the hundreds of thousands left homeless by the brutal storm that tore through homes and damaged the infrastructure of a number of island provinces.

A storm surge that Haiyan churned up brought 15-foot waves to Tacloban, the obliterated city on Leyte’s east coast that took the worst hit from the typhoon.

“All of a sudden all the houses were gone,” including his, said Gonzales, who lived right outside Tacloban. “You can’t find any trace of it, not one piece.”

The storm surge left countless corpses in its wake.

Gonzales counted himself lucky. His wife and their three children were together with him.

His 14-year old daughter sat with a guitar in a soft case tucked between her lower legs.

“Even that survived,” he said.

His eyes started to water when he described how, on the day before Haiyan slammed the country, he picked a high place on the wall to hang the guitar. Gonzales said he wanted to save it because it was from his daughter.

It floated away when the house washed away, but after the storm passed he saw it floating by a wall.

Gonzales said the family left for Manila because, like the many people the storm displaced, they were starting to go hungry, and he worried his children might get sick with no medicine available.

In Tacloban, aid was very slow to arrive to places beyond the city limits. Debris, dwindling fuel and poor communication lines made it hard for relief goods to move to the people who needed it.

“And the smell became too much to bear,” he said, referring to the odor of bodies decomposing in the tropical sun.

Gonzales said he never once lost faith in God.

“You have to trust in the Lord first of all,” he said. “If you don’t have faith, it’s very hard. And I really believe, this was really meant to be. He saved us. He let us live. … He’s given us more time on this earth to honor him.”

Eoghan Rice, communications for the Irish Catholic aid agency Trocaire, said he could smell the decay even in a closed vehicle. He traveled to Tacloban Nov. 14 with an assessment team from Caritas Internationalis.

“The streets of Tacloban are sort of a tangled web of destroyed houses, overturned cars and dead bodies,” he told CNS by phone from Ormoc, a badly hit town on the western side of Leyte. “It’s like somebody picked up the city and just threw it in the air and let the pieces fall randomly.”

He said after seeing the damage wrought by Haiyan, a person’s faith gets even stronger.

“I think it’s heartening to see people all over the world, America, Europe and Asia, responding to this … to show solidarity and support to people who are just going through something horrific,” Rice said. “Most of us could never imagine having to live through this sort of experience.”

NEXT: Pope reiterates call for Catholics to adopt missionary mindset