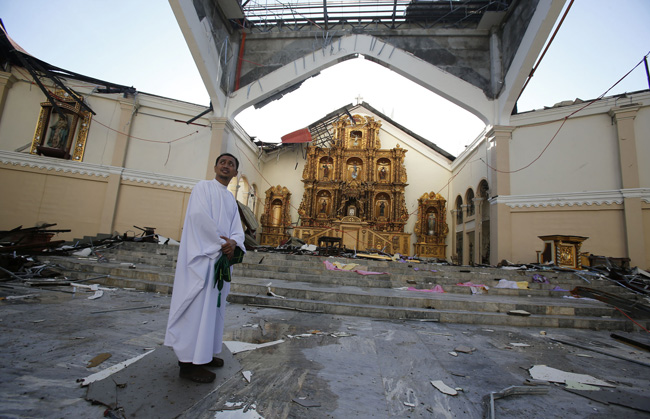 A priest stands in the partially destroyed Metropolitan Cathedral in Palo, Philippines, Nov. 15 in the aftermath of Super Typhoon Haiyan. The cathedral is one of many Catholic churches, schools and convents damaged or destroyed in the powerful storm. (CNS photo/Wolfgang Rattay, Reuters 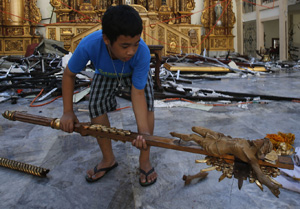 An altar server lifts up a broken crucifix as he and others clear debris from the altar area of the partially destroyed Metropolitan Cathedral in Palo, Phillippines, Nov. 15 in the aftermath of Super Typhoon Haiyan. (CNS photo/Wolfgang Rattay, Reuters)

If the Filipino-American community of Southern California has anything to say about it, the upcoming holiday season in Southeast Asia will not be completely obscured by the effects of Super Typhoon Haiyan.

“If we work hand in hand, then Christmas can continue,” said Father Albert Avenido, who heads up the Filipino ministry for the Los Angeles Archdiocese and who was busy working on what his community describes as a multifaceted local response to one of the most powerful storms in recorded history.

With church, business and civic partners, the Los Angeles Filipinos are planning a local telethon for November to help support development of a short-term tent city in some of the hardest-hit areas in the Philippines. They are also spearheading a collection for food, clothing, medicines and toiletries which they hoped would be ready to ship in the coming days.

“If we ship goods from Los Angeles to Cebu’s port, it will take up to 45 days; it can still arrive during Christmas,” Father Avenido said, adding that the local Knights of Columbus have gotten behind the drive.

Nationally, the U.S. bishops have expressed their solidarity with the people of the Philippines after the devastating effects of Haiyan in a letter to the president of the Catholic Bishops Conference of the Philippines. The bishops called for a special collection to be taken in parishes across the U.S., and proceeds from the collection will go to both immediate humanitarian needs and the cost of long-term reconstruction.

Catholic Relief Services, the U.S. bishops’ overseas relief and development agency, has already begun a major emergency response to Haiyan and has committed $20 million for those efforts.

Father Chris Kintanar, a Filipino and pastor of Queen of Angels in Alpine, in the Diocese of San Diego, said his parish quickly set its second collection for Masses the weekend of Nov. 16 and 17, after the diocese urged parishes to schedule the appeal as soon as possible.

“I am sure many other parishes are doing the same thing,” Father Kintanar said, adding that nearby St. Michael Parish in Paradise Hills has become major hub for collecting food stuffs and other supplies for the Philippines.

“The problem there is how to get it there,” the priest told Catholic News Service. “Our collection is for CRS — to let them do their job. The outpouring has been widespread and lots of people are asking me about the situation over there.”

Father Kintanar said he has seen how traumatized people can bounce back from tragedy with outside help, “but I don’t think they can take of themselves right now. Long term, that typhoon will really affect their economy trying to build from scratch again.”

In Minnesota’s Twin Cities, the Cultural Society of Filipino Americans and Guardian Angels Catholic Church in Oakdale, Minn., planned to host a memorial service and fundraising benefit for Haiyan victims at the church Nov. 24, and a variety of Filipino associations there met Nov. 12 to start planning joint fund raising efforts.

Minnesota Filipino leaders say they hope to raise anywhere from $200,0000 to $1 million for Haiyan victims, according to community organizer and volunteer Jocelyn Ancheta in Minneapolis.

“For us locally it would be a wonderful goal to also achieve putting together a (local) infrastructure for disaster response because I think with global warming more of these storms are going to be happening,” said Ancheta.

She is a board member of the Philippine Center of Minnesota and treasurer of the Minnesota chapter of the Filipino American Women’s Network.

“It seems a bit overwhelming at this point,” she said, noting that community leaders are receiving 300 emails a day in response to the tragedy.

The Filipino leadership there is pulling together a list of channels for giving.

“The outpouring of assistance has been great and in the Twin Cities people do want to help, although we want to dissuade a lot of people from donating clothes because it is expensive to ship,” she told CNS.

In any disaster donors wonder if their contributions will make it to those in need, Ancheta said, adding “that is why we are steering people to the more seasoned NGOs (nongovernmental organizations) and a lot of churches which have been doing these relief efforts.”

There may be some comparisons between the catastrophic aftermath of the 2010 Haiti earthquake and Typhoon Haiyan regarding severe challenges of getting aid and personnel to hardest hit areas, according to Hannah Gregory, a staff person for the U.S. development arm of the Salesians.

“Anything we learned from Haiti we will apply here because the Philippines are remote islands that have been hit pretty hard, and it is hard to get into those areas,” Gregory said, noting that the Salesians have had a missionary presence in the Philippines since 1950 but that some of the Salesian staff there have not been accounted for since the storm passed.

The organization is channeling U.S. donations to their missions and church partners in the region. “What we are looking for now is financial support to help the missionaries purchase things domestically,” she said.

Greg Darr, a Midwest representative for Maryknoll Mission Education in Chicago, was visiting parishes in Ohio this week to raise public awareness and advocacy for typhoon victims in the Philippines and to raise awareness of the effects of the storm overall.

“The devastation we are seeing is a result of choices that were made that kept the region impoverished,” said Darr, whose wife is Filipino. “You have there not only the effects of a storm but decades of poverty that led people to live in subsistence housing that they just could not survive this storm.” 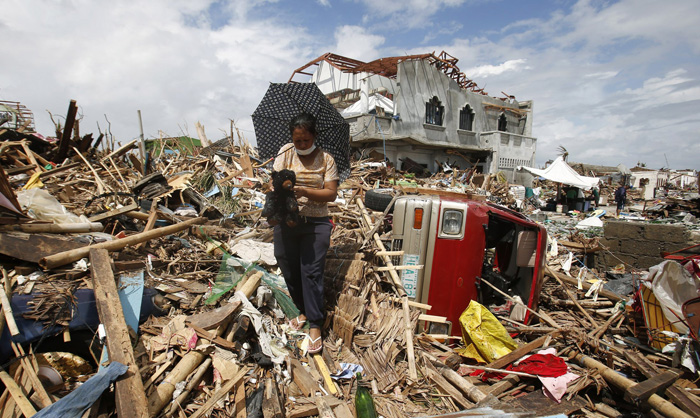 A woman retrieves a teddy bear from a pile of debris in the aftermath Typhoon Haiyan in Tanauan, Philippines, Nov. 14. The powerful storm killed an estimated 2,500 people and left hundreds of thousands displaced in the central Philippines. (CNS photo/Erik De Castro, Reuters)

PREVIOUS: Italian prosecutor says mafia would like to hurt the pope

NEXT: In Philippines, signs of faith among ruins of typhoon