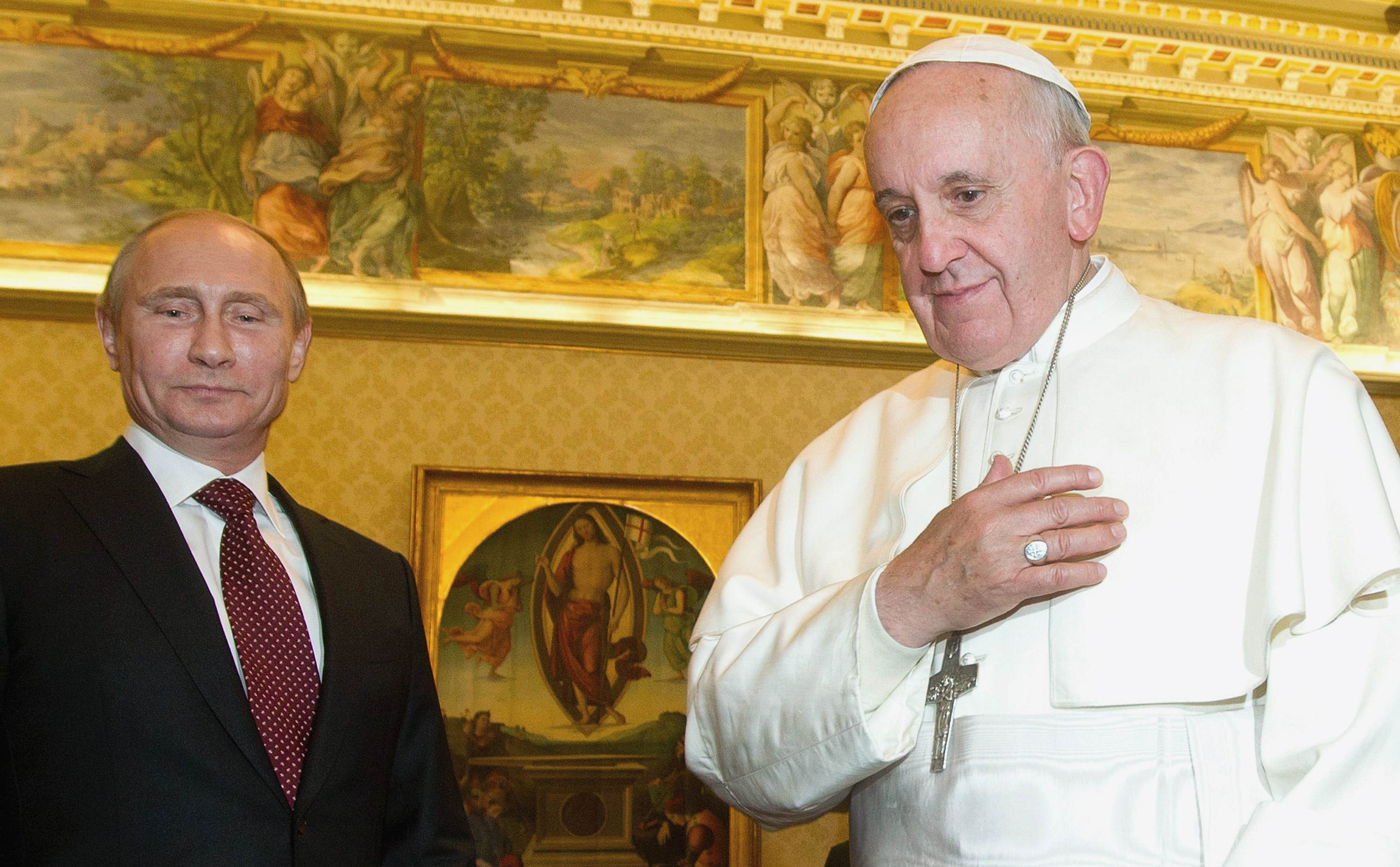 The Russian president “conveyed the greetings of (Russian Orthodox) Patriarch Kirill, but there was not a discussion of ecumenical relations,” said Jesuit Father Federico Lombardi, Vatican spokesman.

A formal statement issued after the meeting said “special attention was given to the pursuit of peace in the Middle East and to the serious situation in Syria.”

The Vatican said Putin thanked the pope for a letter the pope had written him in September when the Russian president was hosting a summit of the G-20 leaders of the world’s largest economies. The pope asked the leaders to “lay aside the futile pursuit of a military solution” to the Syria crisis and promote dialogue and negotiation.

Putin’s government has supported Syrian President Bashar Assad and has blocked U.N. Security Council resolutions to authorize the use of force to oust the Syrian president.

Putin’s government has supported Syrian President Bashar Assad and has blocked U.N. Security Council resolutions to authorize the use of force to oust the Syrian president.

Pope Francis led a prayer vigil for peace in Syria in September and had asked other Christians around the world to observe a day of fasting and prayer for peace in the Middle Eastern country. The war has claimed more than 100,000 lives in fighting since March 2011 and some 9 million have been displaced or forced to seek refuge in neighboring countries.

The Vatican statement said that during the pope’s meeting with Putin, “the urgency of stopping the violence and bringing the necessary humanitarian assistance to the (Syrian) population was underlined,” as well as the need to promote negotiations and “involve the various ethnic and religious components, recognizing their essential role in society.”

Father Lombardi said the two also spoke about “the life of the Catholic community in Russia” and its contributions to the life of society, the oppression of Christians in some parts of the world, the defense and promotion of human dignity and the safeguarding of human life and the family.

Putin’s plane arrived late in Rome and he was more than 45 minutes late for his meeting with the pope. The two spoke privately, aided by interpreters, for 35 minutes before Putin introduced the members of his entourage, including Foreign Minister Sergei Lavrov and Defense Minister Sergei Shoigu.

Pope Francis gave Putin a mosaic with a view of the Vatican gardens and Putin gave Pope Francis an icon of Our Lady of Vladimir, one of the most venerated images in the Russian Orthodox Church.

As the pope was moving away from the gift table, Putin was overheard asking him, “Do you like the icon?” When the pope said yes, Putin made the sign of the cross, bowed and kissed the icon and the pope did likewise.

Earlier in the day, Pope Francis met with several thousand Ukrainian Catholic pilgrims, many of them concerned about the demonstrations that had been going on in Kiev to protest Putin’s alleged efforts to discourage Ukraine’s government from forging closer economic ties with the European Union.

At the end of his Sunday Angelus address Nov. 24, Pope Francis also mentioned the Ukrainians’ prayerful remembrance of the 80th anniversary of the “Holodomor” or “Terror-Famine of Ukraine.”

The pope described the Holodomor as “the great famine provoked by the Soviet regime that caused millions of victims.” Largely blamed on Joseph Stalin’s radical economic policies, and perhaps augmented by his desire to crush the Ukrainian resistance, some 1.8 million to 3.5 million Ukrainians died of starvation in 1932 and 1933.

Critics have accused Putin of promoting a revisionist and overly favorable image of Stalin’s regime and particularly of his prowess in turning the Soviet Union into a superpower.