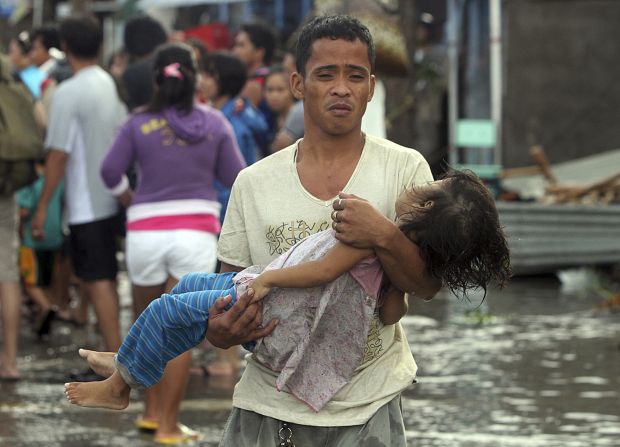 A father carries the lifeless body of his daughter Nov. 10 on the way to the morgue after Super Typhoon Haiyan hit Tacloban, Philippines. (CNS photo/Nino Jesus Orbeta, Philippine Daily Inquirer via Reuters)

VATICAN CITY (CNS) — Pope Francis led prayers for people hit by a deadly typhoon in the Philippines and surrounding region, and asked that concrete aid be sent soon.

During the Angelus with pilgrims in St. Peter’s Square Nov. 10, the pope expressed his concern and prayers for the estimated tens of thousands of people dead and others affected by Super Typhoon Haiyan, which devastated parts of the central Philippines Nov. 8.

“I wish to express my closeness to the people of the Philippines and that region that has been hit by a terrible typhoon. Unfortunately the victims are many and the damage is enormous,” he said.

He asked the tens of thousands of people gathered in the square to join him in a moment of silent prayer “for these brothers and sisters and let’s try also to make our concrete help reach them.”

In response to the tragedy, Pope Francis made an initial donation of $150,000 for the relief efforts through the Pontifical Council Cor Unum.

The money, sent through the local churches hardest hit by the storm, was earmarked to support “assistance for the displaced and those impacted by the flooding,” the Vatican said in a written statement.

The pope also sent a telegram to Philippine President Benigno Aquino saying he was “deeply pained by the destruction and loss of human lives.”

In the message, he also encouraged civil authorities and rescue workers in their efforts and prayed that God would offer “the nation strength and consolation.” 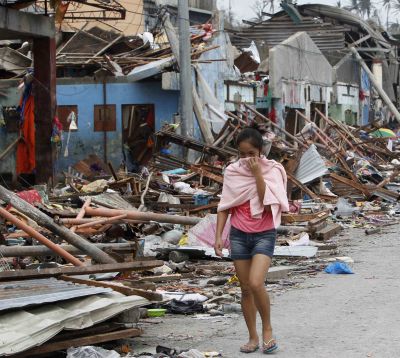 Caritas Internationalis, the Vatican-based confederation of humanitarian agencies of the Catholic Church, reported Nov. 11 that more than 9.5 million people are in need of aid and 600,000 people have been forced from their homes.

Father Edwin Gariguez, executive secretary of Caritas Philippines, said, “Despite the precautions, this was beyond all expectations. We couldn’t image a storm of this size hitting the Philippines.”

Father Gariguez said: “The casualties are increasing day by day. There are dead bodies everywhere. People are traumatized. The most urgent needs are for food and water.”

Caritas Philippines said it was also concerned about the situation on the islands that had not yet been able to reach.

Caritas and CRS said the most urgent priorities were emergency shelter, water and sanitation, household items like blankets, kitchen and cookware, potable water and toilets.

“We really need all the help we can get,” Father Gariguez said. “This is a catastrophe.”

PREVIOUS: At Manila air base, distraught family members hope for plane to Leyte

NEXT: Pope asks parishes to be inclusive of the sick, value their gifts