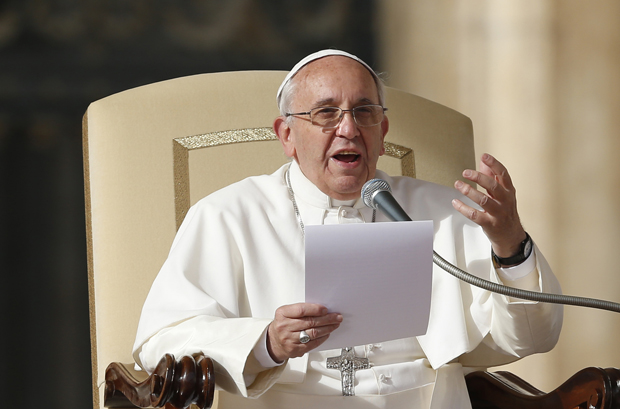 Writing in “Evangelii Gaudium” (“The Joy of the Gospel”), Pope Francis said the church’s opposition to abortion is not a “conservative” political position, but is a key part of its claim that God created and loves each person and that believers have an absolute obligation to defend those whose basic right to life is under attack.

“Precisely because this involves the internal consistency of our message about the value of the human person, the church cannot be expected to change her position on this question,” Pope Francis wrote in the document, which was released Nov. 26 at the Vatican.

“I want to be completely honest in this regard,” he said. Acknowledging confusion in the general public between the reforms of church structures he has called for and expectations that he could change some church teaching, he said the church’s opposition to abortion “is not something subject to alleged reforms or ‘modernizations.'”

“A human being is always sacred and inviolable, in any situation and at every stage of development,” he wrote. “Once this conviction disappears, so do solid and lasting foundations for the defense of human rights, which would always be subject to the passing whims of the powers that be.”

The “defense of unborn life is closely linked to the defense of each and every other human right,” he said.

While some people ridicule the church’s opposition to abortion or present it “as ideological, obscurantist and conservative,” he said, “it is not ‘progressive’ to try to resolve problems by eliminating a human life.”

Pope Francis said unfortunately it is true that, as a whole, the church has “done little to adequately accompany women in very difficult situations, where abortion appears as a quick solution to their profound anguish, especially when the life developing within them is the result of rape or a situation of extreme poverty.”

Still, he said, the church is called to show particular care for the vulnerable and today the unborn are “the most defenseless and innocent among us.”

“Reason alone is sufficient to recognize the inviolable value of each single human life,” the pope wrote, “but if we also look at the issue from the standpoint of faith, ‘every violation of the personal dignity of the human being cries out in vengeance to God and is an offense against the creator of the individual.'”

NEXT: Pope frames vision for church outreach at every level