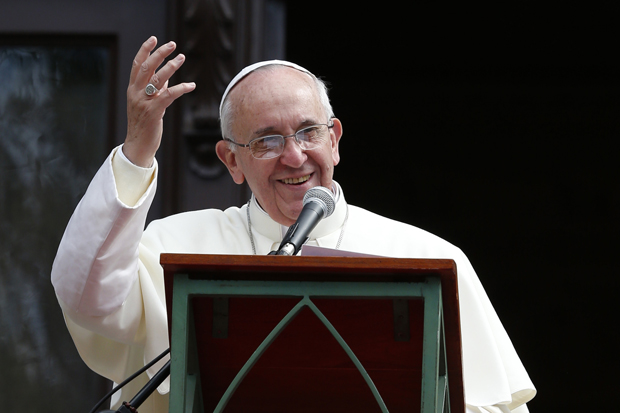 VATICAN CITY (CNS) — Pope Francis’ apostolic exhortation on sharing the joy of the Gospel is a call to faith-filled optimism, recognizing challenges but knowing that God’s love and lordship will prevail, said Archbishop Rino Fisichella, introducing the text to the media.

The archbishop, president of the Pontifical Council for Promoting New Evangelization, told reporters Nov. 26 that “Evangelii Gaudium” (“The Joy of the Gospel”), is “an invitation to recover a prophetic and positive vision of reality without ignoring the current challenges.”

When the pope writes about the reform of church structures to be always missionary or the need to improve homilies or the obligation to reach out to the poor first of all or his insistence that the church always will defend the life of the unborn, Archbishop Fisichella said, “the cement which binds all these themes together is concentrated in the merciful love of God.”

At the Vatican news conference to present the papal document, Jesuit Father Federico Lombardi, Vatican spokesman, said Pope Francis wrote it himself in Spanish, mostly during his August vacation.

Archbishop Claudio Celli, president of Pontifical Council for Social Communications, said the exhortation “has an almost conversational feel to it which reflects a unique and profound pastoral sensitivity.”

In calling for the reform of church structures at every level and a change of attitude on the part of all Catholics in order to give priority to sharing the Gospel of God’s love and mercy with all, he said, the pope uses “the simple, familiar and direct language that has been the hallmark” of his style since becoming pope in March.

Archbishop Lorenzo Baldisseri, general secretary of the Synod of Bishops, said Pope Francis took the suggestions made by the 2012 Synod of Bishops on new evangelization, “made them his own, re-elaborating them in a personal way” and coming up with “a programmatic, exhortative document” on mission in the fullest sense.

“Evangelii Gaudium” is not a post-synodal apostolic exhortation, he said, “because its scope goes well beyond the discussions of the synod.”

Archbishop Fisichella called the document “a map and guide” for the church’s pastoral mission and work in the world.

Pope Francis does not simply prescribe changes for parishes and dioceses, Archbishop Baldisseri explained, he also recognizes a need to give “special attention to the exercise of primacy” by the pope.

In the document, Pope Francis wrote, “Since I am called to put into practice what I ask of others, I too must think about a conversion of the papacy. It is my duty, as the bishop of Rome, to be open to suggestions which can help make the exercise of my ministry more faithful to the meaning which Jesus Christ wished to give it and to the present needs of evangelization.”

Pope Francis noted how in the 1995 encyclical “Ut Unum Sint” (“That All May be One”), Blessed John Paul II “asked for help in finding ‘a way of exercising the primacy which, while in no way renouncing what is essential to its mission, is nonetheless open to a new situation.’ We have made little progress in this regard,” Pope Francis said.

Both Archbishops Fisichella and Baldisseri noted how Pope Francis in the apostolic exhortation expresses a need for the church to return to the Second Vatican Council and find concrete ways to ensure the world’s bishops, united with the pope, exercise collegiality or shared responsibility for the mission of the church.

He also, Archbishop Fisichella said, sees a need for the church to move “from a bureaucratic, static and administrative vision of pastoral ministry to a perspective which is not only missionary, but is in a permanent state of evangelization.”

Several of the questions at the news conference involved Pope Francis’ affirmation in the document that in its teaching and preaching, the church must “concentrate on what is essential.”

Archbishop Fisichella said Pope Francis wants to avoid “the danger of presenting the faith only in the light of some moral questions as if these could stand apart from the centrality of love.”

It is love for every human person, particularly the weakest and poorest, that must motivate the action of the church and all its members, the pope wrote. Archbishop Fisichella said that applies not only to what individuals do in their homes or the church does in its institutions, but requires the church and its members to claim their voice in public and lobby for laws that respect human life and give justice to the poor.

Archbishop Fisichella said people cannot read the document as if the pope were saying the church’s pastoral work can go in one direction and its doctrinal teaching can go in another. “Doctrine is how the church understands the faith, which must be lived out. Pastoral work helps Catholics to live it.”

PREVIOUS: In document, pope lays out his vision for an evangelical church