Pope says only men can be priests, but women must have voice in church 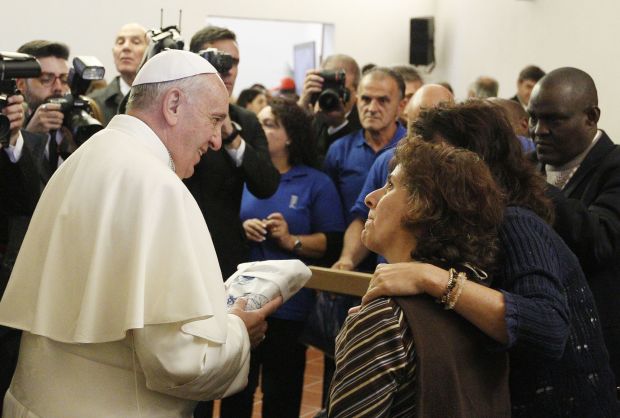 Pope Francis leads a meeting with the poor in early October at the archbishop's residence in Assisi, Italy. In his first extensive piece of writing as pope, Pope Francis lays out a vision of the Catholic Church dedicated to evangelization, with a focus on society's poorest and most vulnerable, including the aged and unborn. (CNS photo/Paul Haring)

VATICAN CITY (CNS) — The Catholic Church is not going to change its position on the inadmissibility of women priests, Pope Francis said, but it does have to stop linking all decision making to ordination and allow women to have a voice in deliberations.

In his apostolic exhortation, “Evangelii Gaudium” (“The Joy of the Gospel”), Pope Francis wrote that the involvement of all Catholics is needed — both as missionaries and in revising structures and pastoral programs to ensure they are focused on mission.

“I readily acknowledge that many women share pastoral responsibilities with priests, helping to guide people, families and groups and offering new contributions to theological reflection,” the pope wrote.

At the same time, he said, “demands that the legitimate rights of women be respected, based on the firm conviction that men and women are equal in dignity, present the church with profound and challenging questions which cannot be lightly evaded.”

“The reservation of the priesthood to males, as a sign of Christ the spouse who gives himself in the Eucharist, is not a question open to discussion,” the pope said, “but it can prove especially divisive if sacramental power is too closely identified with power in general.”

The idea that ordination equals power not only robs the church of valuable contributions from women, he said, it presents a misguided view of the priesthood and the sacraments.

“The configuration of the priest to Christ the head — namely, as the principal source of grace — does not imply an exaltation which would set him above others,” Pope Francis wrote. “In the church, functions ‘do not favor the superiority of some vis-a-vis the others.'”

Even when considering the priest’s role within the hierarchical structure of the church, he said, “it must be remembered that ‘it is totally ordered to the holiness of Christ’s members.’ Its key and axis is not power understood as domination, but the power to administer the sacrament of the Eucharist; this is the origin of its authority, which is always a service to God’s people.”

Pope Francis said the church and society need women and always have benefited from their contributions, including “the sensitivity, intuition and other distinctive skill sets which they, more than men, tend to possess.”

“I think, for example, of the special concern which women show to others, which finds a particular, even if not exclusive, expression in motherhood,” he wrote. “But we need to create still broader opportunities for a more incisive female presence in the church,” including “the possible role of women in decision-making in different areas of the church’s life.”

PREVIOUS: Pope frames vision for church outreach at every level

NEXT: To better evangelize, Pope Francis turns church’s gaze within