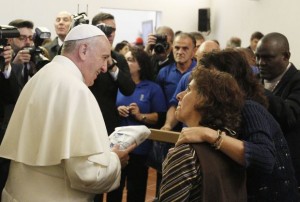 Pope Francis leads a meeting with the poor in early October at the archbishop’s residence in Assisi, Italy. In his first extensive piece of writing as pope, Pope Francis lays out a vision of the Catholic Church dedicated to evangelization, with a focus on society’s poorest and most vulnerable, including the aged and unborn. (CNS photo/Paul Haring)

VATICAN CITY (CNS) — When the Synod of Bishops on the new evangelization met at the Vatican in October 2012, among the top items on the agenda was the threat of militant secularism in a post-Christian West.

“It is as if a tsunami of secular influence has swept across the cultural landscape, taking with it such societal markers as marriage, family, the concept of the common good and objective right and wrong,” and posing new impediments to spreading the Gospel, Cardinal Donald W. Wuerl of Washington, the synod’s relator, told the gathering at its first working session.

The same topic arose repeatedly in addresses by synod fathers, especially those from Europe and North America, and in the final propositions they gave the pope as the basis for his post-synodal apostolic exhortation. But Pope Benedict XVI resigned before he could write such a document, leaving the task to his successor, who finally responded with “Evangelii Gaudium” (“The Joy of the Gospel”), published Nov. 26.

In writing the apostolic exhortation, Pope Francis departed from usual practice and declined to use the draft provided by synod officials. The result is a text in the pope’s distinctive voice and focused on his particular concerns. Among the features that distinguish “Evangelii Gaudium” from the synod that gave rise to it, none is more striking than how little attention it pays to the problem of secularism.

The pope criticizes contemporary society and culture, especially in the world’s richer nations, for their “idolatry of money” and an “economy of exclusion and inequality.” But he makes only a few broad references to the “crude and superficial” intolerance of unbelievers and the danger a distorted pluralism poses to religious freedom.

By contrast, Pope Francis devotes much of his exhortation to the shortcomings of the church itself. He laments its “excessive centralization” in the Vatican, which he finds a hindrance to the church’s “missionary outreach.” He complains about members of religious orders who show an “inordinate concern for their personal freedom and relaxation,” and about priests “obsessed with protecting their free time.”

The pope criticizes those who show an “ostentatious preoccupation with the liturgy, doctrine and the church’s prestige, but without any concern that the Gospel have a real impact on God’s faithful people and the concrete needs of the present time.” He upbraids Catholics with a “business mentality, caught up with management, statistics, plans and evaluations, whose principal beneficiary is not God’s people but the church as an institution.” And he regrets that women do not yet have a sufficient role in decision-making within the church.

Pope Francis also deplores divisiveness within the ranks, writing: “It always pains me greatly to discover how some Christian communities, and even consecrated persons, can tolerate different forms of enmity, division, calumny, defamation, vendetta, jealousy and the desire to impose certain ideas at all costs, and even persecutions which appear as veritable witch hunts. Whom are we going to evangelize if this is the way we act?”

Most remarkably, the pope devotes nearly a tenth of the entire document to suggestions for improving priests’ homilies, which in his telling are all too often moralistic, unlearned, disorganized and verbose.

These problems matter, the pope makes clear, insofar as they impede efforts to make the church’s structures “more mission-oriented, to make ordinary pastoral activity on every level more inclusive and open, and to inspire in pastoral workers a constant desire to go forth and in this way to elicit a positive response from all those whom Jesus summons to friendship with him.”

It is thus surprising that, with the possible exception of a reference to the “pain and the shame we feel at the sins of some members of our church,” Pope Francis does not even allude to what most people inside and outside the church would regard as its greatest scandal of recent years: the sexual abuse of minors by priests. This scandal is not, strictly speaking, a question of evangelization. But as Pope Benedict wrote to the Catholics of Ireland in March 2010, church leaders’ failures to prevent and punish clerical sex abuse “have obscured the light of the Gospel to a degree that not even centuries of persecution succeeded in doing.”

Over the last decade, bishops’ conferences in a number of countries, including the United States and Canada, have taken systematic action to protect children from this threat, and the Vatican has instructed the rest of the world’s bishops to do likewise. Yet by all accounts the process is still far from complete. Carrying it out will presumably be a priority for Pope Francis, as part of his campaign to reform and purify the church at every level for the sake of its essential evangelical mission.

PREVIOUS: Pope says only men can be priests, but women must have voice in church

NEXT: Priest says ministry in L.A. prepared him for strife-ridden Egypt