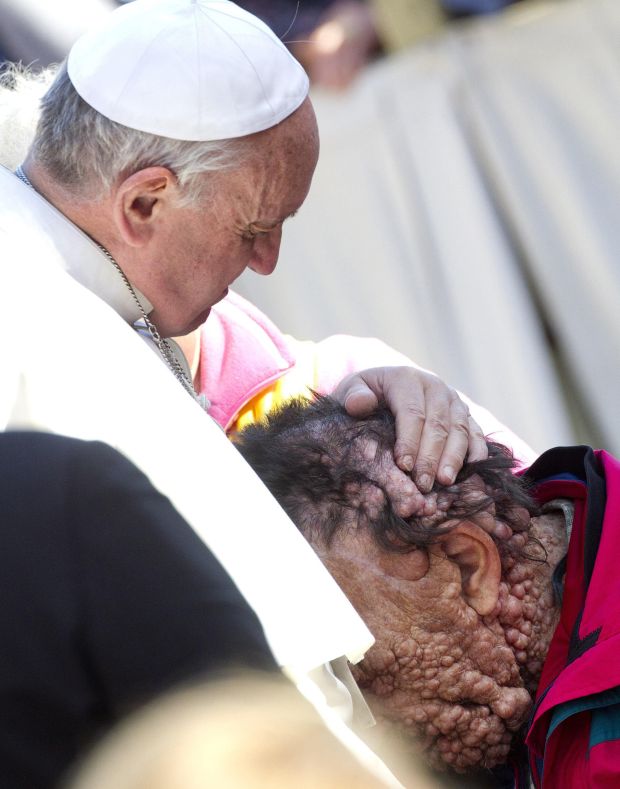 Pope Francis embraces Vinicio Riva, 53, during his general audience in St. Peter's Square at the Vatican Nov. 6. Riva, who is afflicted with neurofibromatosis, said receiving the pope's embrace was like being in paradise. Riva is from a small village near Vicenza in northern Italy. (CNS photo/Claudio Peri, EPA)

VATICAN CITY (CNS) — For someone who has frequently been shunned and humiliated because of a disease that has severely disfigured his entire body, receiving the pope’s loving embrace was like being in paradise.

Vinicio Riva, who is afflicted with neurofibromatosis, said his brief encounter with Pope Francis Nov. 6 at a general audience in St. Peter’s Square “seemed like forever.”

Images of the pope kissing and embracing the Italian man made headlines, but his identity and background weren’t known until two Italian news outlets found and interviewed him.

“My heart was bursting,” he told the Italian daily Corriere della Sera Nov. 18. When the pope hugged him tight, “I felt like I was in paradise.”

Riva, 53, lives in a small village near Vicenza in northern Italy with his younger sister Morena Riva, who has the same genetic disorder, and their aunt, Caterina Lotto, who cares for them. The siblings’ late mother also suffered from the disease, which is typically hereditary.

Riva told the Italian magazine Panorama Nov. 18 that the thing that struck him most was that the pope didn’t hesitate at all.

“I’m not contagious, but (the pope) didn’t know that. But he did it, period: He caressed my whole face and while he was doing it, I felt only love,” he said.

“First, I kissed his hand, while he caressed my head and wounds with his other hand,” Riva explained.

“Then he pulled me toward him, hugging me tight and kissing my face. My head was against his chest and his arms were wrapped around me. He held me so tightly, cuddling me, and he didn’t let go. I tried to speak, to say something, but I wasn’t able to: I was too choked up. It lasted just a little more than a minute, but, for me, it seemed like forever,” he told Panorama.

“The pope’s hands are so soft. Soft and beautiful. And his smile (is) bright and wide.”

Neurofibromatosis results in numerous, often painful benign tumors. Riva said they constantly itch and he often wakes in the morning with his shirt soaked with blood from scratching.

He frequently has been shunned by people who didn’t know him, he said.

The worst episode, he said, occurred one day as he sat in the front of a bus and a passenger told him to go sit in the back, saying, “‘You horrify me and I don’t want to look at you.’ No one, not even the driver, came to my defense. In fact, many passengers agreed with the man. That really hurt,” he said.

Lotto, his aunt, told Panorama that when she and Riva would be sitting in hospital waiting rooms when he was young, she would hold him close and hug him tight whenever people cringed or moved away in fear.

She embraced him “to make them both (Riva and the others) understand” there was nothing repulsive or scary about him, she said.

Riva works as a volunteer in a retirement home, where his father lives. However, when they see each other, their father can’t bring himself to hug his son, said Morena Riva, the sister. Their father “is embarrassed by his disease. He only says, ‘Do you want a coffee?'”

But Riva disagreed with his sister and said their father has his own way of showing his love.

He told Panorama that he has lots of friends and is loved by almost everyone in his village. He goes out with friends for pizza and to watch soccer matches.

He also flirts with the nurses, the magazine said, and, although he only earns a small allowance volunteering, he spends a good chunk of that money on them.

NEXT: Catholics must learn to make mission a priority, says Boston cardinal