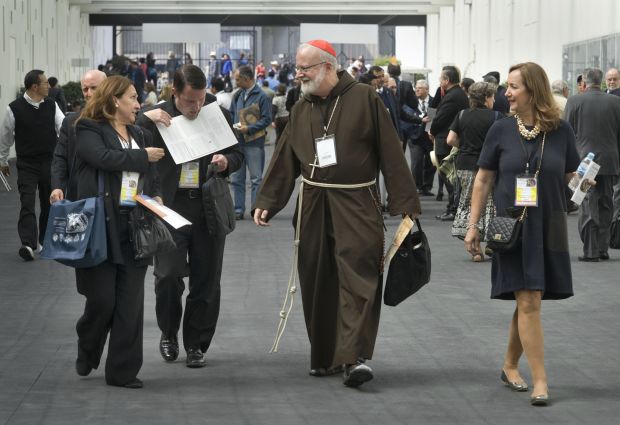 Cardinal Sean P. O'Malley of Boston arrives for a meeting at the Basilica of Our Lady of Guadalupe in Mexico City Nov. 17. Bishops and church leaders from the Americas gathered Nov. 16-19 at the basilica to discuss the new evangelization in the Americas. (CNS photo/David Maung)

MEXICO CITY (CNS) — The United States is experiencing a “transition from a strong cultural Catholicism to an intentional Catholicism,” and that requires “a new evangelization (that) responds to the questions of today,” said Boston Cardinal Sean P. O’Malley.

“Doing things as they were always done doesn’t work,” he told participants at a conference held at the Basilica of Our Lady of Guadalupe on the new evangelization of the Americas.

His Nov. 18 remarks were part of a panel titled, “Culture and Society on the American Continent: Mission and Contribution of the Church.” Cardinals Oscar Rodriguez Maradiaga of Tegucigalpa, Honduras, and Francisco Robles Ortega of Guadalajara, Mexico, were the other panelists.

The new evangelization reflects an attempt by the church to renew Catholicism in the Americas, where the church has a long history and deep cultural traditions, but has become less relevant for an increasingly large part of the population.

Mission has not always been a priority associated with Catholics, unlike evangelicals, Cardinal O’Malley said.

“This is something that we have to change,” he said.

In his speech, Cardinal O’Malley outlined three areas of focus for the U.S. Catholic church’s missionary work: the protection of children, the promotion of marriage and the incorporation of immigrants.

“The security and protection of children has to be a priority,” he said, explaining that the church had learned tough lessons for the sexual abuse scandals of clergy. “The church is now attempting to regain the trust of our community.”

Easy divorce, the commonness of cohabitation, children born out of wedlock and attempts at redefining marriage also concerned Cardinal O’Malley, who said, “I consider this one of the biggest challenges we confront.”

But he also saw challenges to the institution of marriage as an opportunity to redefine relations with non-Catholics.

“This presents a tremendous ecumenical opportunity to resist the secular cultural forces that are always hostile to many of the evangelicals’ values,” Cardinal O’Malley said.

“We have many more ecumenical opportunities in the society of today. We need to make new friends.”

Immigration is another challenge — and opportunity — for the faithful, Cardinal O’Malley said.

“The majority of Catholics in the United States will soon be Hispanics. This simply underscores the importance of our relations with churches of Latin America,” he said. “Increasingly we have priests and religious from Latin America, who can serve in our communities.”

The situation is somewhat different in Latin America itself, as the church confronts social ills such as violence, but similar in the sense that many are falling away from the faith or switching to non-Catholic congregations.

Cardinal Rodriguez Maradiaga said the Catholic Church and Spanish language have been among the few unifying forces, but old problems such as poverty and insecurity “have infiltrated across our shared Latin American cultural space … and generate violence.”

He called on the church in Latin America to embrace Pope Francis’ calls for mission and to “promote a culture of life.”

“The great continental mission assures the role of the church as a mediator, servant, educator, liberator and sanctifier of the continental reality of America,” he said.

A challenge for the church to confront in Latin America is that evangelical congregations have gained ground, especially in Brazil and some Central American countries. In Mexico, however, some 83 percent of the population still professes Catholicism, according to census data.

Still, Mexican church officials express concern, especially with the way the faith is practiced. Some think priests and parents are not properly passing along the faith to young people.

“Our methods of evangelization require a profound reconsideration that permits us to communicate the Christian experience with simplicity, audacity, warmth and transparency,” Cardinal Robles said.

Many people practice their faith in a superficial way in Mexico, often showing a great religiosity and even venerating pseudo-saints, such as the folkloric Santa Muerte (St. Death). Cardinal Robles said this was problematic for church officials.

He attributed the problems in Mexico to a postmodern distrust of institutions and rules, an absence of proper Catholic formation and people picking at the parts of religion they like and discarding the rest — or abandoning the faith all together.

“The transmission of the faith has encountered difficulties in our region due a new sensibility that is exploring the different religious alternatives as if they were part of the options offered to us by the market,” the cardinal said. “The lack of a personal encounter with God, of an authentic religious experience, is at the bottom of this a la carte religion.”