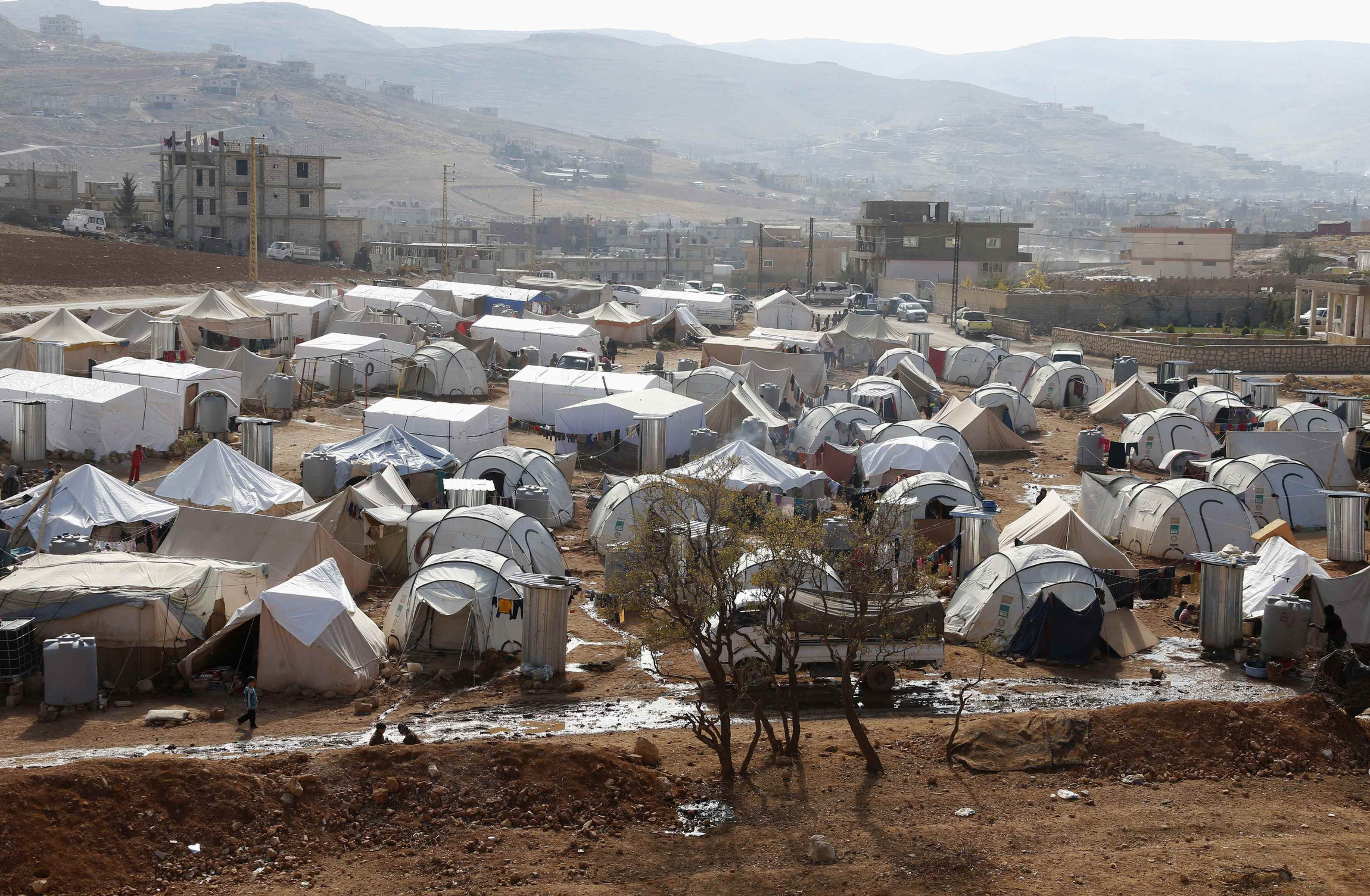 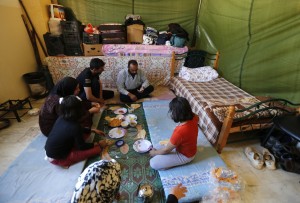 Syrian refugees sit on the floor as they eat in a makeshift room inside a mosque in late October in Shebaa, Lebanon. The staff of the U.N. High Commissioner for Refugees says there is a great need for emergency development assistance to help nearby nations cope with the influx of Syrian refugees, who are taxing public services and housing. (CNS photo/Jamal Saidi, Reuters)

WASHINGTON (CNS) — With an estimated 6.5 million Syrians — one-third of the country’s population — displaced from their homes, aid agencies are scrambling to meet needs that go beyond traditional emergency assistance.

T. Alexander Aleinikoff, the deputy high commissioner for the U.N. High Commissioner for Refugees, told a Washington audience Nov. 22 that the influx of Syrians to adjoining countries — Jordan, Turkey, Lebanon, Iraq and Egypt — is creating pressure on municipalities that are requiring the agency to do development work in addition to providing emergency aid.

Although there are some refugee camps located near the Syrian borders with those countries, Aleinikoff explained that many more people are crowding into established cities and towns, taxing services like electricity, water and sewage systems, and overcrowding schools.

In response, the UNHCR and other assistance organizations that typically do not do development work are having to bolster the capacity of utilities, for example, Aleinikoff said at a program sponsored by the Migration Policy Institute, where he previously served as a fellow and board member.

“Because 80 percent of the refugees are not in camps, the impact on host countries is dramatic,” Aleinikoff said.

With extended families crowding into homes and apartments, rents in some places have tripled, schools are overloaded and wages have fallen. Although refugees are not typically allowed to legally work in host countries, those who are living outside formal camps often have no choice but to find jobs to pay for living expenses, and they’ll often work for lower wages than the people who were there first.

About 4.5 million Syrians are displaced within their own country, with another 2.1 million living in other nations, the UNHCR estimates. The effects on the neighboring countries are dramatic.

Lebanon has had 60,000 Syrian refugees a month register during 2013, estimated to total about 1 million people by the end of 2013, or approximately 24 percent of the Lebanese population before the current crisis. With few refugee camps in Lebanon, the UNHCR reports they are scattered across 1,500 locations in the country.

The estimated 600,000 Syrian refugees in Jordan account for 10 percent of the kingdom’s population. About one-fifth of those Syrian refugees are primary school age, but only about half of them are registered in school.

Within Syria, UNHCR is working to find safe places for people whose homes and entire neighborhoods may have been destroyed by shelling during the civil war, Aleinikoff said. In a country where 120,000 people have died in the civil war, those who are internally displaced are still at great risk, he said.

The UNHCR has had a few staff members killed, not targeted individually, but because they were working in dangerous areas, he said. Still the UN is able to work inside the country, to keep its warehouses of food and relief supplies stocked and reach some of the people in need.

“It’s not (going to) as many as we would like,” Aleinikoff said, “but we are getting aid in.”

As to the next steps for Syrians, Aleinikoff said groundwork has been laid for permanent resettlement for some refugees in other countries, including the United States.

During 2014, the UNHCR, which manages the initial screening and referral of refugees to host countries, hopes to find new homes for 30,000 Syrians. That 30,000 would be in formal, permanent resettlement, such as to the United States. Additional people would be relocated temporarily outside the Middle East, he said. Germany, for example has offered to take in thousands of Syrians temporarily.

“Of 2 million, that’s not a huge number,” Aleinikoff admitted. “But it’s part of the way for other countries to share the hosting burden.”

Anastasia Brown, the director of resettlement services for the U.S. Conference of Catholic Bishops’ Migration and Refugee Services, told CNS the UNHCR met in October with representatives of agencies that resettle refugees to begin planning for processing Syrians.

More than a year ago, MRS began assessing where it might place Syrian refugees in the U.S., she said. MRS typically handles about 26 percent of all refugees brought to the United States, she added.

The U.S. typically does not commit to a firm number of refugees it will accept from a given situation, Brown explained. In October, President Barack Obama signed off on a commitment to accept 70,000 refugees worldwide in the 2014 fiscal year. That’s just about the number of refugees who were settled in the country in 2013, which had the same 70,000 cap.

Brown said because of the long vetting process for refugees to be admitted, there are already plenty of people “in the pipeline” to meet that number, without accounting for more than a few Syrians. She said MRS and other advocacy agencies are encouraging the U.S. to admit Syrians without regard for the 70,000 limit because of the extraordinary situation.

Brown said she’s also concerned about how the U.S. will apply its policy of not accepting immigrants and refugees who are found to have given “material support” to individuals involved in a very broad definition of terrorism. That might exclude someone who gave her son a coat, Brown said, if that son was found to have been part of a revolutionary organization.

Syrians to be given refugee status will first be referred by the UNHCR to a host country, which then will apply its own vetting process. In the United States, that means background security checks, a personal interview and other steps, Brown said. The process from UNHCR referral to a refugee arriving in the United States generally is no faster than nine months, she said.