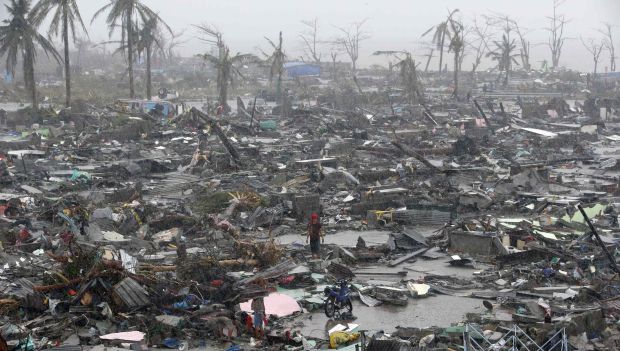 WASHINGTON (CNS) — Expect the rebuilding in typhoon-ravaged regions of the Philippines to take up to five years, a Catholic Relief Services official said at a congressional hearing.

Because the recovery will be slow for millions of displaced Filipinos, Sean Callahan, chief operating officer at CRS, urged congressional representatives to commit funding for the long term so that progress can continue after the disaster that has claimed more than 5,600 lives is no longer in the headlines.

“It’s not over. The disaster hasn’t disappeared,” Callahan told a Dec. 3 hearing of the House Subcommittee on Africa, Global Health, Global Human Rights and International Organizations. At the same time he credited the U.S. Agency for International Development and the U.S. military for their roles in the first wave of response since Super Typhoon Haiyan swept through the central Philippines Nov. 8.

“It’s important that we don’t forget the Philippines and let that country go down,” Callahan continued in response to a question from Rep. Chris Smith, R-N.J., subcommittee chairman. “Thirteen million people were affected. This is going to affect the whole country over the long term. It really needs a significant three- to five-year response.

“I think the Filipino people and the Filipino (Catholic) church and the government are ready to put their shoulders to the grindstone (to rebuild). If we do it in solidarity with them, they can achieve that goal. If we let it go, frankly, shame on us,” Callahan added.

The hearing was called by Smith, who led a small congressional delegation to Tacloban and surrounding communities in the Philippines Nov. 22-26. The delegation included Rep. Trent Franks, R-Ariz., and Rep. Al Green, D-Texas.

Smith said he and his colleagues wanted to witness firsthand the devastation and relief efforts. The U.S. has committed an initial $60 million in typhoon-related aid.

The New Jersey Republican said his main concerns focused on ensuring that aid was reaching devastated communities quickly, steps were being taken to limit the outbreak of diseases, and women and children were being protected from exploitation by human traffickers.

“We know traffickers are ready to prey on the vulnerable. The Philippines has a huge problem of women being trafficked and children as well,” Smith said.

Nancy E. Lindborg, assistant administrator for democracy, conflict and humanitarian assistance at USAID, assured Smith that food and emergency supplies were reaching affected communities within days of the typhoon. She said the expertise of faith-based organizations such as CRS and World Vision has helped ensure that aid distributions were reaching isolated communities.

USAID, working in cooperation with the U.S. military and UNICEF, was able to get the water system in the city of Tacloban functioning within eight days and that fogging was underway to limit mosquito reproduction in the vast puddles of standing water that remained.

Callahan credited the local church for mobilizing quickly to begin registering people in an effort to ensure that aid reaches victims most in need.

Lessons learned during the agency’s response to the work in Banda Aceh, Indonesia, after the 2004 tsunami and the 2010 earthquake in Haiti are helping CRS workers respond to the typhoon, Callahan said. As a result, Filipinos are being urged to shelter in place in familiar communities rather than relocating to areas where they have no connections and would be vulnerable to exploitation, he explained.

Callahan also said CRS had secured $15 million in private contributions in the three weeks after the typhoon and expected to raise another $5 million from those sources. U.S. parishes, directed by the U.S. Conference of Catholic Bishops, were collecting funds at the end of November and into December as well for relief and rebuilding efforts.

Through early December, Callahan estimated that CRS had provided shelter for 80,000 people and has begun planning to provide assistance for housing reconstruction efforts.

Chris Palusky, senior director of humanitarian and emergency affairs at World Vision, echoed Callahan’s comments to the subcommittee, describing the recovery effort as a marathon. He called for a coordinated transition from emergency response to recovery and urged Congress to recognize the importance of remaining committed to the aid effort for years to come in cooperation with the Philippine people